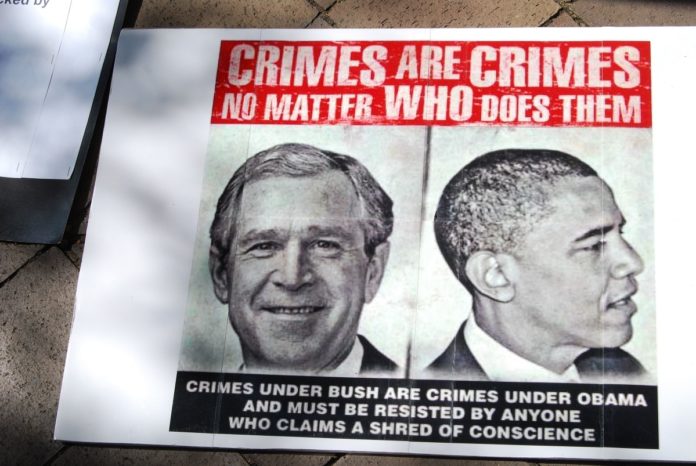 Ah America, how could a country justify invading Iraq because of non-existent WMDs, yet afflict this much radioactive devastation without remorse?

“The war isn’t over. Yes, the Americans are gone, but we are still suffering from the Consequences,” said Leila Jabar, whose three children died because they were born with congenital deformities. She blames radioactive ammunition used by American forces during the war for the health problems of her children. Depleted uranium was deployed against thousands of people, with US jets and tanks firing nearly 10,000 depleted uranium shells in Iraq during the 2003 “pre-emptive strike” or, in non-Orwellian-newspeak, invasion. Most of the DU rounds fired by the US-led coalition were in heavily populated areas.
Dr Chris Busby is a researcher on the effects of depleted uranium, and says that uranium was only available in Iraq to the American troops.
“We went to Fallujah and we found the levels of cancer. We looked at the parents of children with congenital malformation and we did analysis of their hair to see what was inside their hair that might be genotoxic, that might be the sort of thing that can cause congenital malformation. The only thing that we found was uranium. We found uranium in the mothers of the children with congenital malformations,” he told RT.
In 2003, Colonel James Naugghton of US Army Material Command stated in “They want it to go away because we kicked the crap out of the them” In response to Iraq’s complaints about the usage of depleted uranium shells.

In a six-page long memo written in 1975, Major James Miles and Will Carroll from the international law division of USAF’s Office of The Judge Advocate General had stated depleted uranium weapons were legal, but had recommended imposing restrictions on their usage.
Use of this munition solely against personnel is prohibited if alternative weapons are available,” the memo stated. This was for legal reasons “related to the prohibitions against unnecessary suffering and poison
Unfortunately, this was ignored in the Iraq war and it was deployed against any manner of “target” without any reservations whatsoever.
A journalist for Al Jazeera, Dahr Jamail, reported on how the US invasion of Iraq had left a legacy of cancer and birth defects that were linked to the use of depleted uranium and even white phosporous.
They’re extremely hard to bear witness to. But it’s something that we all need to pay attention to … What this has generated is, from 2004 up to this day, we are seeing a rate of congenital malformations in the city of Fallujah that has surpassed even that in the wake of the Japanese cities of Hiroshima and Nagasaki that nuclear bombs were dropped on at the end of World War II.
In Iraq, doctors and prominent scientists agree that DU contamination is connected to the rise of diseases that had never been observed there. These new diseases are seen to affect the kidney, lungs and liver and may even cause total immune system collapse. There is also a steep rise in leukemia, renal and anemia particularly among children. Miscarriages and premature births are also on the rise among the women of Iraq, concentrated in areas where the heaviest of American operations had occurred.
Dr. Samira Alani is a pediatric specialist at Fallujah General Hospital. He has taken a personal interest in researching how this epidemic had came to be since the US invasion.
We have all kinds of defects now, ranging from congenital heart disease to severe physical abnormalities, both in numbers you cannot imagine,” Alani told Truthoutat her office in the hospital last year, while sharing countless photos of shocking birth defects.
Alani had co-authored a 2010 study that proved that the rate of heart defects in Fallujah was 13 higher than the rate in Europe; birth defects affecting the nervous system were found to be 33 times higher than Europe. She visited Japan to learn more about the effects of radiation and was told that the current birth defects rate at Hiroshima and Nagasaki were currentlu only 1 to 2%. At 14.7%, the rate of birth defects in Fallusah is fourteen times the current rate in nuclear radiated areas of Japan. Although it has been roughly 60 years since the attack, the effects of radiation linger for a far longer time.
Iraq never had nuclear weapons of mass destruction, and the only chemical weapons of destruction found much later were mothballed gifts from the US itself. This injustice should be remembered, most of all by the citizens who had been lied into supporting a war-mongering regime.