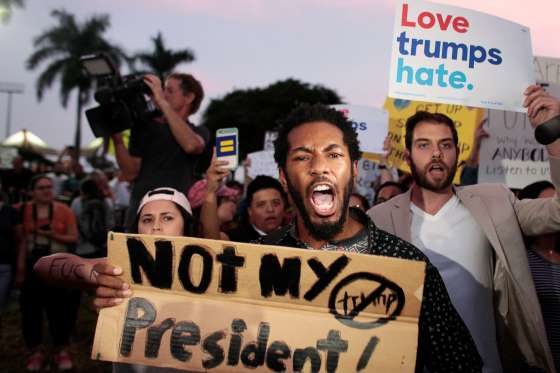 In the aftermath of an election, protests across the United States have grown momentum. California, Portland in Oregon and Texas have all witnessed anti Trump protests.

Over 200 have been arrested in California and the Oregon protests that turned violent have a reported 1,500 participating in what police called a “riot.” In Dallas, TX, the protests were smaller and less violent. In Chicago, approximately 10,000 gathered to protest outside the Trump hotel.

However, the protests aren’t without their own speculation, with some suggesting a direct link to George Soros and his Moveon.org organization.

Trump himself has suggested the protests appear organized, as do some spectators, including Fox News, who made the link between protestors being bussed into Austin, TX, for the event, and using identical signs across several locations. Alt-right organizations also pointed out that the protests appeared shortly after a Moveon.org email was sent out via the press last Wednesday.

Americans to Come Together in Hundreds Peaceful Gatherings of Solidarity, Resistance, and Resolve Following Election Results

Hundreds of Americans, dozens of organizations to gather peacefully outside the White House and in cities and towns nationwide to take a continued stand against misogyny, racism, Islamophobia, and xenophobia.

Tonight, thousands of Americans will come together at hundreds of peaceful gatherings in cities and towns across the nation, including outside the White House, following the results of Tuesday’s presidential election.

The gatherings – organized by MoveOn.org and allies – will affirm a continued rejection of Donald Trump’s bigotry, xenophobia, Islamophobia, and misogyny and demonstrate our resolve to fight together for the America we still believe is possible.

Within two hours of the call-to-action, MoveOn members had created more than 200 gatherings nationwide, with the number continuing to grow on Wednesday afternoon.

WHAT: Hundreds of peaceful gatherings of solidarity, resistance, and resolve nationwide

WHEN / WHERE: Find local gatherings here. Major gatherings include in New York City’s Columbus Circle and outside the White House in Washington, DC. Moveon.org originally formed in response to Bill Clinton’s 1998 impeachment by the U.S. House of Representatives, and later received a hefty donation of $1.46 billion by none other than George Soros. A member of the Hyatt hotel family, Linda Pritzker, has also donated a whopping $4 million to the organization, as well.

The organization has an extensive anti-republican history, namely paving their way with the funding of millions of dollars in anti-Bush campaigns while providing massive ad campaigns for both Gore and Clinton.

Correction: Since the release of this article, a statement has been released by MoveOn.org clarifying that the “false ads on social media sites purporting to be from MoveOn offering payment for protestors” are fake and not sponsored by MoveOn.org. The organization, albeit supports and organized over 200 peaceful Anti Trump protests, has also released a statement that any gatherings since Wednesday have not been of their doing.

You can see the full statement here.

This article (George Soros-Funded Moveon.org Organized Anti Trump Protests) is a free and open source. You have permission to republish this article under a Creative Commons license with attribution to the author AnonWatcher and AnonHQ.com.