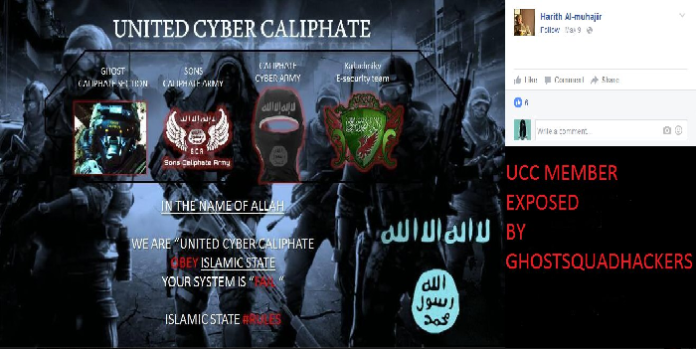 Ghost Squad Hacker group, in conjunction with #OpReverseCaliphate, have released the identities of several members affiliated with the United Cyber Caliphate, the primary hacking branch of the Islamic State. Their names, numbers, Facebook and Twitters have now been made public and the Anonymous Intelligence Agency has delivered the information to the CIA.

Now, Ghost Squad Hackers (GSH), have made public the identities of some of the hackers affiliated with the ISIS cyber army called United Cyber Caliphate, including leader Mauritania Attacker.

Ouali Bouziad
+213551209906 co-founder of UCC In this dox stating he will attack Malaysian Servers for jailing Isishttps://t.co/7caG7g6P2V

In an interview with Security Affairs News, S1ege – the member of Ghost Squad behind the dox – stated that: “We all know ISIS is not true Islam its fake and we are going to target every hacker inside of ISIS especially the ” United Cyber Caliphate’ which is a conjunction of hackers hacking for ISIS. They are trying to create a quote on quote ‘Cyber Caliphate’ and we intent to prevent that and stop them in their tracks thus we named the operation #OpReverseCaliphate.  Islam is not ISIS, ISIS is a gang attacking on Ramadan and they use drugs,  rape women and kill innocent children. Their victims are of all religions, in fact, most of their victims are Muslims in Syria & Iraq!”

In statement to AnonHQ News, S1ege claims the group currently has tabs on over 10,000 active ISIS members online.

In his article available Security Affairs, author Aveek Sen reports that Ghost Squad Hackers split from the AnonGhost hacker group when Mauritania Attacker and a few others supported ISIS. Thus, two groups were formed: Ghost Caliphate that joined forces with ISIS, and Ghost Squad Hackers that opposed it.

Ghost Squad Hackers and prior to it, AnonGhost, were considered pro-Muslim hacking groups due to their support for Palestine. On being asked, S1ege replies: “Although we are Muslims Christians and Atheist we have no one religion and  we accept all. But (it’s true that) majority of us are Muslims and we believe in  true Islam not this fake ISIS shit.”

The war between good and bad Muslims seems to be culminating in the cyber world with indications of victory for the good ones. One hopes to see the war reach the same conclusion soon in Iraq and Syria, as well.

As ISIS loses ground in Syria and Iraq, it will try to move from ISIS (Islamic State in Iraq and Syria) to IS (Islamic State). But since it doesn’t have any network outside of Iraq and Syria, it will do a quid pro quo deal with Jihadi terrorist groups online. Swear allegiance to IS and IS does free online propaganda.

Hence, IS might expand into cyberspace to create fear disproportional to its on ground terror capabilities.

This article (Ghost Squad Dox’s Members of United Cyber Caliphate Including Alleged Leader) is a free and open source. You have permission to republish this article using a creative commons license with attribution to the author and AnonHQ. Join the conversations at www.anonboards.com