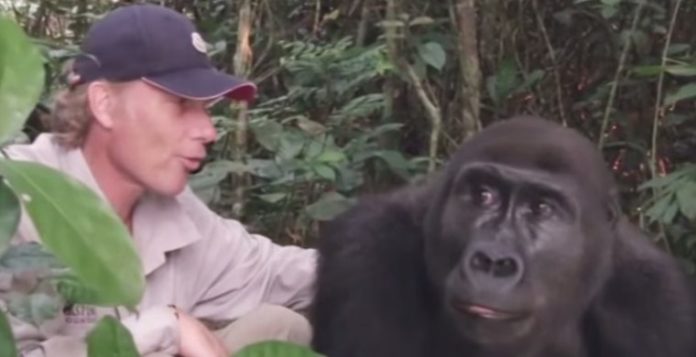 In 2003, The Aspinall Foundation’s project, Back to The Wild — designed to re-introduce gorillas back into the wild — successfully released two gorillas back into their natural habitat with the help of conservationist, Damian Aspinall. The two gorillas, Djalta and Bimms, had been living in captivity at the Howletts Wild Animal Park in England, before they were both set free to roam the Gabon jungle, in West Africa.

Appearing in the video is Damian and his daughter Tansy, who ventured out to visit their primate friends over ten years after their release. Their search for the gorillas, which lasted several hours, spanned the riverbanks of the jungle. Eventually, the gorillas responded to Damian’s calls were seen emerging from thick bush. Unsure how the gorillas would respond to his presences, he remained cautious. However, these feelings were quickly replaced with excitement when he realized that both animals had instantly recognized the man who had drastically transformed their lives. The old friends then spent time playing, cuddling and re-acquainting themselves.

“It was fantastic to see the greeting I got,” said Damian. “I felt such love from them. When they hold you, and ask you to hold them like gorillas do, there’s no greater privilege. Bonding with a gorilla is one of life’s greatest experiences.”

During her father’s heart-warming reunion, Tansy was still on the boat waiting, slightly apprehensive to meet the gorillas which had only known her as a young child. It was here that she witnessed something entirely unexpected and astonishingly breath-taking. Peering through the trees, only a short distance away was Djalta; an expression etched on his face which suggested he recognized the young girl he had not seen for roughly twelve years.

The video is an incredible demonstration of animal intelligence and how two species can develop a strong, loving and everlasting bond.