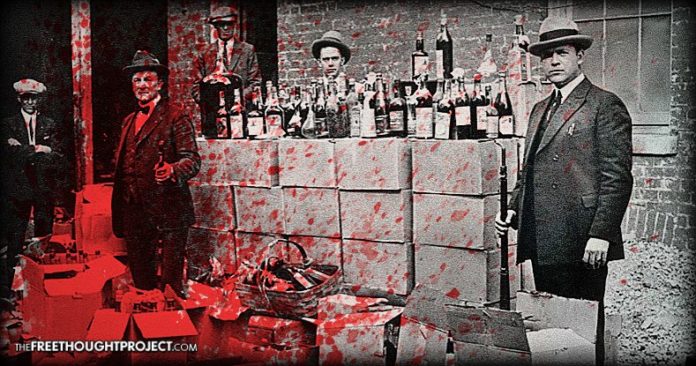 But there was a time, many, many years ago, when the American government deliberately killed over 10,000 citizens to stop drinkers from drinking themselves to death. Sadly, the 1920s’ “chemists’ war of Prohibition” or the “national experiment in extermination” — intentionally poisoning the alcohol supplies to enforce the floundering State-mandated Prohibition on alcohol — is erased from U.S. history.

Though it is mostly forgotten today, the gory federal poisoning program remains one of the deadliest decisions in American law-enforcement history.

The Eighteenth Amendment of the United States Constitution in 1920 prohibited the production, import, transport, and sale of alcohol.  For a few months, private ownership and consumption of alcohol reduced considerably. But people didn’t stop drinking. Thanks to the uneven enforcement of the federal law, organized criminal gangs started producing and selling rotgut alcohol.

The crime syndicates managed to steal “denatured” alcohol — commercial-use alcohol with added toxic or unappetizing chemicals — from companies that made industrial alcohol used in various paints, solvents, fuels, and medical supplies. Thereafter, their chemists would make the alcohol palatable again by undoing the denaturing process by “re-purifying” the alcohol.

As illicit alcohol shops and underground alcohol sales exploded, the number of people drinking alcoholic beverages grew higher than it was before Prohibition. According to Slate:

“Alcoholism rates soared during the 1920s; insurance companies charted the increase at more than 300 more percent. Speakeasies promptly opened for business. By the decade’s end, some 30,000 existed in New York City alone.

“Street gangs grew into bootlegging empires built on smuggling, stealing, and manufacturing illegal alcohol. The country’s defiant response to the new laws shocked those who sincerely (and naively) believed that the amendment would usher in a new era of upright behavior.”

It soon became apparent that Prohibition was an unprecedented catastrophe.

According to the U.S. Treasury Department, an estimated 60 million gallons of industrial alcohol annually was stolen, “re-natured”, and sold as palatable alcohol to the country’s drinkers in the mid-1920s.

As a result, in 1926, President Calvin Coolidge’s government decided to make the denaturing formulas lethal by adding poisonous methyl alcohol (wood alcohol) into the mix.

“The government did it, anyway. People started dying right away. There was this wash of super-poisoned alcohol turning up everywhere, because it was the only stuff someone could get. This was the alcohol of the country.

“The estimates I saw were about 10,000. Experts could say at the time that those deaths were over and above the other alcohol-related deaths. These numbers notched up after the more poisoned alcohol went into the market.”

In 1926 alone, 1,200 people were hospitalized by poisonous alcohol in New York City; 400 died. People began dropping like flies. By 1928, the public felt the U.S. government must intervene. But the federals announced that the government could do absolutely nothing as “the use and sale of poisonous alcohol was not regulated by any of the federal laws.” Yet, Charles Norris refused to pull his punches:

“The government knows it is not stopping drinking by putting poison in alcohol. Yet it continues its poisoning processes, heedless of the fact that people determined to drink are daily absorbing that poison. Knowing this to be true, the United States government must be charged with the moral responsibility for the deaths that poisoned liquor causes, although it cannot be held legally responsible.”

By the time the Prohibition ended — after the Twenty-first Amendment repealed the Eighteenth Amendment on December 5, 1933 — the horrendously ill-fated federal poisoning program had killed nearly 10,000 Americans.

This article (The Gory Federal Poisoning Program the US Does Not Want You to Know) is a free and open source. You have permission to republish this article under a Creative Commons license with attribution to the author and AnonHQ.com.