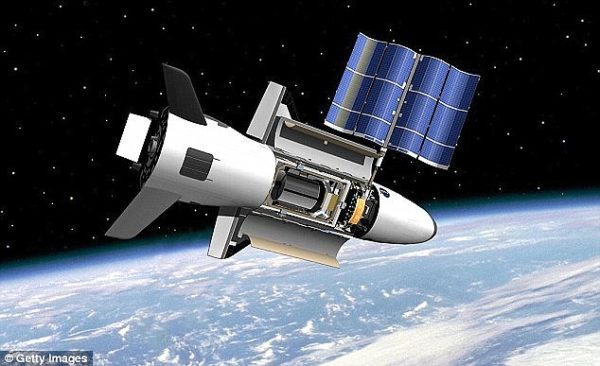 On May 20th 2015, a special unmanned space plane of the United States Air Force, Boeing X-37B, was deployed to space by the American government.

The Mirror reports that the reusable unmanned spacecraft blasted into orbit from Cape Canaveral in the state of Florida, carrying a brand new type of ion engine called a “Hall thruster,” and a NASA experiment designed to test how 100 types of materials respond to the harsh conditions of space. At a first glance, the vehicle looks just like a mini Space Shuttle, yet it isn’t.  X-37B is too small to carry people on-board, but does have a cargo bay similar to that of a pickup truck, which is just large enough to carry a small satellite. At the time the plane took off, some scientists expressed grave concern. A senior scientist at the Global Security Program, and also a member of the Union of Concerned Scientists, Laura Grego reportedly told Space.com that there was “no compelling reason” why experiments should be carried aboard a top-secret craft.

Currently, it is believed the unmanned plane has spent the past year orbiting around Earth. The American government has, however, failed to give any tangible reason behind the deployment of X-37B to space, except saying it is for an experiment. As to the actual nature of the experiment, that still remains a mystery.

However, due to the secret nature about the actual mission of the space vehicle, on its 1st anniversary in space (May 20th, 2016), many observers have resorted to speculations and assumptions about the true purpose of the plane orbiting around the Earth. In the Russian media, for example, we gathered that several articles have been published, suggesting it is part of a space warfare mission designed to allow the United States to destroy other satellites in space.

Even in America, some critical online news media outlets have said the X-37B is part of a top-secret government program to develop reusable, unmanned spacecraft technologies and conduct covert experiments.

The American online news reports added that the United States Air Force has already successfully completed three X-37B missions, starting with the first launch in April 2010; it is said the three missions and two X-37B craft have proved reusable flight, re-entry, and landing technologies. Judging from this background, many observers asked that if the previous missions have proved successful, why was another X-37B launched again in 2015?

However, according to an American renowned astronomer at Harvard-Smithsonian Center for Astrophysics, Jonathan McDowell, the mystery of the X-37B may not lie so much in the structure of the vehicle, but rather, in what it is carrying. He revealed that the vehicle is perfect for carrying sensitive cargo into space for testing.

Mr McDowell also posited that the American government is conducting some covert experiments in space, and will try as much possible to keep it secret, adding that even engineers working on the plane cannot tell its mission in space.

Pc World quoted Mr McDowell as saying “They are filling the payload bay with various experiments. Probably different experiments each flight, probably for different customers. The sorts of things that you would want with something like this … you develop new technology sensors like new cameras, new listening devices, intelligence [gathering] radio antennas, and maybe a new type of antenna dish that unfolds in a new way. And you want to exercise it in space multiple times and then bring it back to earth.” The big question now, for many observers is how long this mysterious mission is going to last. It is said the duration of the past three missions has progressively increased, from 240 days, to 469 days, and finally 674 days. Therefore, many observers believe that this current mission might last for 720 days, or more.

This article (Government Secrets: Secret Plane in Space for a Year Now, Nobody Knows its Mission [Video]) is a free and open source. You have permission to republish this article under a Creative Commons license with attribution to the author and AnonHQ.com.