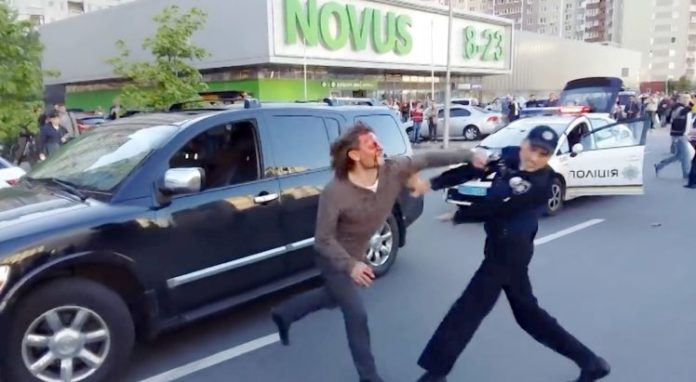 Accused of driving drunk, a 50-year-old former wrestler – who won gold for Ukraine at the 1996 Atlanta Olympics – shrugged off pepper spray and batons as not one, but seven police officers tried to restrain him in full public view in Kiev.

Angry at being stopped, Vyacheslav Oliynyk confronted two cops when one of them fired pepper spray in his face to arrest him. The minor fracas soon turned violent when an enraged Oliynyk threw a punch at the other officer, who hit him with a baton. Even when bleeding heavily from wounds on his face and head, Oliynyk got more aggressive and started throwing several punches. It finally took seven police to tackle an injured wrestler to the ground.

“I admit I was partially guilty, I can’t tell you the whole thing. I’m partly guilty because I did not stop and I was ignoring the police. But I am not a criminal. As far as I can see there will be a court hearing and they will punish me somehow because they always do. However, the fact that police let me go home on the same day shows I didn’t do anything that bad.”

While there is no denying that the whole incident was unfortunate, the restraint shown by the Ukrainian police is incredible. Ukraine’s police force, perceived as chronically extorting bribes and harassing citizens, was last year replaced with polite, well-trained, and physically fit officers who refuse to take bribes. Portrayed as a “force for change” and the “cops who would save a country,” over a quarter of the new police force consists of women — one of the highest rates in the world.

Ironically, the police reform – expected to take from five to 10 years to complete – is financially supported by the United States (with a contribution of $15 million) battling the “death by cop” epidemic — the US law enforcement officers killed up to 1,199 people last year, the majority of whom were people of color.

Under the US law, officers are allowed to use deadly force on a fleeing person suspected of a felony, if they believe the suspect will cause death or serious injury to the officers or the public, if not apprehended; but they can’t shoot unarmed, non-dangerous suspects out of concern that they may escape. Despite the mandate, police officers in the US are trained to shoot to kill, not incapacitate. Perhaps the US officers could learn a thing or two from the Ukraine officers?

This article (Graphic Video: Former Olympic Wrestling Champion Fights Off 7 Cops) is a free and open source. You have permission to republish this article under a Creative Commons license with attribution to the author and AnonHQ.com.