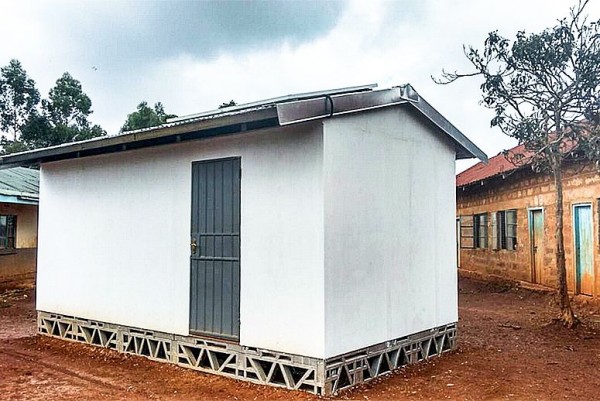 The energy situation in Africa is not getting better. In fact, it has become a major headache for many governments on the continent. Even commercial capital cities are faced with a constant erratic energy supply, ultimately resulting in governments forgetting to work towards connecting  rural areas to the national grid.

In this modern era, education without ‘Information Technology Communication’ (ICT) is not going to serve students any better. In rural communities in Africa, where there is often no electricity, students are deprived of  receiving an education in ICT. However, in the promising East African country of Kenya, a technology company from the United Kingdom, is leading an energy and education revolution. The company, which is named Aleutia, is building solar-powered classrooms in rural communities in some 47 locations across the country.

The remarkable thing about this highly equipped technology box, is that it takes only 48 hours to build once all the parts are assembled. In addition, the box structure does not even require a technical person to fix it.

Aleutia said it has already started to pilot test the project, and has so far received a positive response. All the structure needs is sunshine, which is available almost all year round in Kenya, to power the gadgets in the structure. The Take Part quoted the Aleutia website as saying, each solar classroom comes in a kit “that can be transported in a pickup or cattle truck.” Once the box is opened, no construction workers or expensive equipment are required for assembly. A 20-by-10-by-8-foot classroom can be put together in about two days by an average person with a single screwdriver, which is already included in the box.

According to Aleutia, the material for the structure itself is made from folded steel. This steel is produced locally, meaning the project is also helping to create more jobs for local people. Each box (classroom) contains 11 computers. 10 of the computers are for students, while the remaining computer is for the teacher. The teachers computer comes preloaded with offline information from Wikipedia, and lessons from the free digital education service Khan Academy. Once the school is erected and the solar panels are providing electricity, the computers can be plugged in and begin providing teachers with a resource to prepare for lessons, as well as provide students with an area to complete assignments.

“So for the past 2 years we’ve been working on a way to provide not just the computers and the solar equipment but the structure itself. To provide a solution for transforming education that could truly scale – a standardized classroom, loaded on a truck, installed in less than 48 hours onsite and with a modern interior,” Aleutia said.

It is said the first school to have this resourceful structure is in the Kiambu County area, just north of the capital, Nairobi. Aleutia completed that classroom back in July, and it is hoping to finish the rest of the classrooms over the next few months. According to UNESCO, more than 1 million children in Kenya are out of school, and three-quarters of the population lives in rural areas where there is no electricity.

Therefore, the country is in desperate need of classrooms such as this. Aleutia said it is hoping that its plug-and-play pilot program will help give some 20,000 Kenyan children access to a basic education in a modernized environment, much like the education received by children elsewhere in the developed world.

This Article (Green Energy Revolution: UK Tech Company Builds Solar-Powered Schools In Kenya In Just 48 Hours) is free and open source. You have permission to republish this article under a Creative Commons license with attribution to the author and AnonHQ.com.