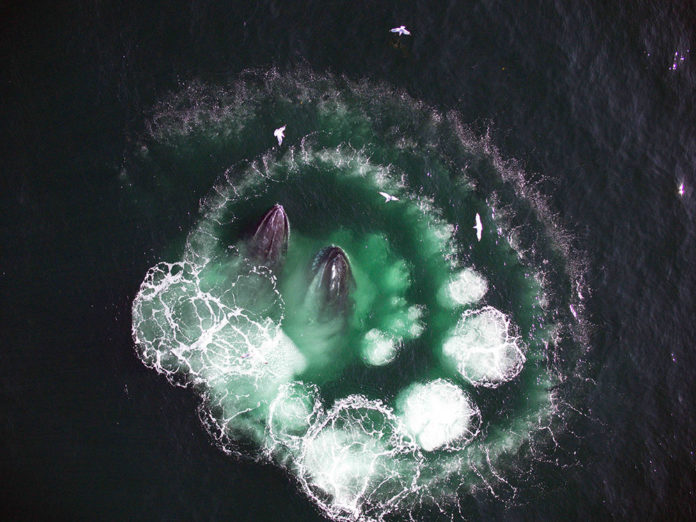 Over recent months, debates surround the use of drones and the moral implications attached to using the technology for military advancements, crowed control, for commercial purposes and even  leisurely at home, have erupted in the media. However, according to a recent press release, drones are also being used to help a cause that cannot be questioned–saving the whales.

Last month, scientists from the Woods Hole Oceanographic Institution in Massachusetts “successfully demonstrated a new non-invasive tool to obtain hard-to-get health measurements of large endangered whales in the wild.” By using a small remote-controlled hexacopter, for the first time ever, scientists were able to collect both breath samples from the whales’ and take aerial photos of their body condition.

The drone used in the expedition, was chosen after researchers conducted rigorous testing of multiple iterations of drone hardware and software designs off the shore of New Zealand, Chile, and new England. The drone that was selected on completion of this testing was the small (32-inch-diameter), 6-rotor hexacopter.

Although collecting high-resolution aerial images of whales is not a new concept (researchers have been doing it since the 1990s), the combination of the two sets of data is significantly helping marine biologists gauge the health status of  marine species and the ocean as a whole.

“I’m not saying collecting blow samples is novel; we’ve been doing it with various devices for the past 10 to 15 years, and with remote-controlled helicopters,” said marine biologist Michael J. Moore, the director of the marine mammal center at Woods Hole.

With today’s modern lens, the researchers are able to calculate, down to about two centimetres, the width and length of the whale, allowing them to determine the condition of the animal’s body incredibly accurately.

“An aerial vertical photo, done right, without a lot of reflection in the water and with the whale stretched out, gives you a great idea of how much body fat the whale is carrying, and whether it’s pregnant or not,” Moore said.

However, in the case that a whale is particularly thin, even the highly accurate calculations cannot explain the cause, unless of course there is physical evidence that indicates that the whale has been injured from either fishing gear or passing ships. To tackle this problem, the team developed a method of using the drones to collect samples of the whales body fluids; these samples are collected when the whales exhale.

“There are two [body fluids] we can get: the blow and the poop, and the blow is much more clinically valuable,” he said. “Respiratory disease is a big problem for whales, and blow contains concentrations of compounds that reflect what’s going on in the rest of the body.”

In addition to the more accurate measurements and the ease of collecting whale blow samples, the use of drones for whale research has a number of other benefits. Older methods for this type of research required the use of planes, which is both more expensive and has a greater negative impact on the environment. The technology is also much safer to use in the field for both the researchers and the wildlife. Moore explains, “multi-copter platforms are a lot safer for the humans involved because you don’t need to be flying at low altitudes.”

Over the next year, they also hope to do more surveys of right whales in the waters of Canadian, the U.S., and Argentina, in order to collect data that could possibly contribute to saving the species from extinction.

This Article (Scientists Use Drones To Study And Save The Whales) is free and open source. You have permission to republish this article under a Creative Commons license with attribution to the author and AnonHQ.com.