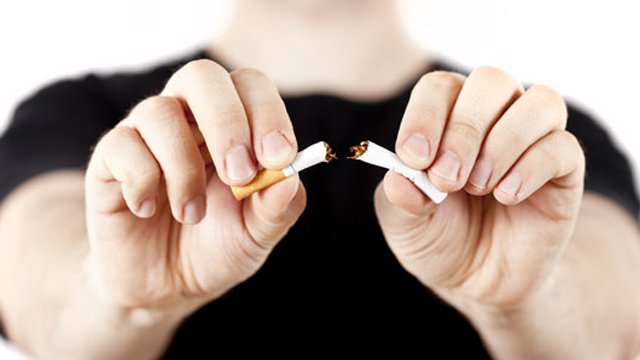 Researchers at Duke University School of Medicine, have found that people who successfully quit smoking might actually be hard-wired for success.

For the study, researchers analyzed fMRI scans of 85 people. These scans were taken one month before they attempted to quit smoking. All participants stopped smoking and the researchers tracked their progress for 10 weeks. 41 participants relapsed.

Looking at the brain scans of the 44 smokers who quit successfully, the researchers found that they had something in common before they stopped smoking – better synchrony between the insula, home to urges and cravings; and the somatosensory cortex, a part of the brain that is central to our sense of touch and motor control. “Simply put, the insula is sending messages to other parts of the brain that then make the decision to pick up a cigarette or not,” said Merideth Addicott, lead author of the study.

Dr. Joe McClernon, one of the study’s authors, told The Huffington Post, “We know this is a region that’s involved in craving, motivation to smoke and withdrawal. Our work increases this understanding and gives us a better sense of other brain areas that are involved with the insula in these processes.”

The researchers hope that the findings will set the stage for future treatments that will help people quit smoking by specifically targeting brain function.

“Relatively new therapies like transcranial magnetic stimulation and neurofeedback have the potential to modulate brain function in ways that could improve cessation outcome. Our research provides the data needed to target those therapies at the brain regions that matter for cessation,” McClernon added.

According to the Centers for Disease Control and Prevention, seven out of every 10 adult smokers report that they want to quit.

“We have provided a blueprint. If we can increase connectivity in smokers to look more like those who quit successfully, that would be a place to start. We also need more research to understand what it is exactly about greater connectivity between these regions that increases the odds of success,” McClernon told reporters.

This Article (Smokers Who Quit Have Brains Hard-Wired For Success) is free and open source. You have permission to republish this article under a Creative Commons license with attribution to the author and AnonHQ.com.