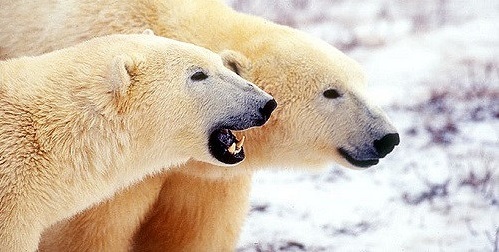 A ‘Pizzly’ or ‘Grolar’ Bear, an extremely rare grizzly-polar bear hybrid, has been shot and killed by a hunter in Canada. At the time of the shooting, 25-year old hunter Didji Ishalook had believed that he had spotted a polar bear or an Arctic fox on the crest of a snow-covered. However, after delivering the fatal shot with his rifle, it was soon revealed that he had shot a very rare grizzly-polar bear hybrid.

“It looks like a polar bear but it’s got brown paws and big claws like a grizzly,” Ishalook told the Guardian. “And the shape of a grizzly head.”

The grizzly-polar bear is so rare, only a handful of sightings have been confirmed in the wild. It is unknown how many of the bears exist; up until around 10 years ago, many even doubted the hybrids existence in the wild.

At this moment in time, it is uncertain whether the bear is a grolar or a prizzly; the name of the hybrid bear is determined by the species of the mother and father. DNA testing is expected to later confirm the name of the bear.

“I think it’s 99 per cent sure that it’s going to turn out to be a hybrid,” Ian Stirling, an emeritus research scientist with Environment Canada, told The Toronto Star.

Although many activist still oppose the practice, the bear was legally killed under a program that allows Inuit to hunt a limited number of polar bears for subsistence. It is estimated that roughly 600 polar bears are killed every year under this program.

Last month, the Committee on International Trade of Endangered Species decided to drop efforts to impose an international ban on trading in polar bear products. In a statement, the committee cited climate change as a greater threat to the species than Inuit hunting.

“We are putting our resources into working in collaboration with other polar bear range states to address climate change and mitigate its impacts on the polar bear as the overwhelming threat to the long-term future of the species,” they said in a statement.

In addition, the sighting of the bear has raised greater concerns among the scientific community. With sightings becoming more regular in the wild – there have been three sighting of the hybrid in as so many years – experts are beginning to question why the two species of bear are breeding with each other.

“The fact that a grizzly and polar bear are mating tells you that they’re hanging out,” Stirling told the Star. “This isn’t just a casual one-night stand kind of thing.”

As it can take several days to induce ovulation in a female bear, scientist are able to conclude that both polar bears and grizzly bears are regularly socializing with one another.

However, it appears not all experts support this recent theory. “We can’t say specifically, ‘this is because of climate change,’” Nunavut carnivore biologist Malik Awan told Nunatsiaq News. “There’s many possible reasons. For example, there’s a lot going on in grizzly habitat in the South like habitat change, loss and fragmentation.”

Although it is currently uncertain what is causing the bears to cross into each other territories, the hybridization of polar and grizzly bears will certainly further strain the polar bears dwindling populations.

This article (Grizzly-Polar Bear Hybrid Shot by Hunter in Canada; Scientist Fear the Hybrid is a Result of Climate Change) is a free and open source. You have permission to republish this article under a Creative Commons license with attribution to the author and AnonHQ.com.