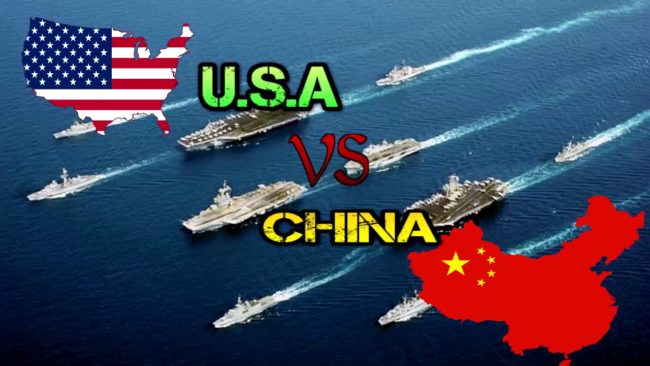 Whatever your opinion about the United States military, believe it or not, it has actually been relatively calm and conservative over the last several years – compared to what it could be. This is because no President wants to have the legacy of getting into war just before leaving office – looking at you, Lyndon Johnson. Your opinions of Barack Obama also aside, I think everyone understands he is not going to declare war against anyone any time soon – sorry to disappoint you @YouTube.

I am writing this because, right now, the United States Navy is conducting the largest maritime “war game” exercise in history, in the South China Sea. Last month, operations were coordinated with the help of 4,000 soldiers from the Philippines and another 80 from Australia. The U.S. has sent 5,000 troops of their own and as of June, the United States announced they will be sending additional troops and resources into the region. Even a former DoD spokesperson has been quoted as saying, the situation in the South China Sea “has become a military contest between China and the U.S.”

In addition to 5,000 soldiers, the U.S. has sent Navy Destroyers, multiple Air Craft Carriers, anti-missile defense systems, nuclear subs, 55 fighter jets and long range WW2 bomber planes. Much like with Yemen, the United States has sold munitions and missile defense systems to the Philippines to strengthen their military. The President has also lifted our long standing weapons ban with Vietnam, quickly arming the country with US munitions – Vietnam just happens to be another country quarreling with China at this moment in time. The United States has also temporarily stationed B-1 bombers, surveillance aircraft and aerial tankers at Australia’s Northern Territory bases.

President Obama calls our building presence in the South China Sea a “show of force,” to intimidate the Chinese and remind them that America still has the strongest military in the entire world. Obama wont declare war on anyone, or put “boots on the ground” in any sort offensive military campaign. What he chooses to do instead, is passively aggressively show our rivals what our military could be capable of – if it ever came to that. In a sense, these operations serve much like a ‘nuclear deterrent’. Only instead of nukes we use soldiers, war ships, subs and fighter jets.

This is all happening because China has laid claim to nearly all the “disputed islands” throughout the South Pacific, ignoring the claims of Philippines and other countries to the same land. For quite some time now, especially within the last couple years, China has slowly transformed their presence in the region. In doing so, China has also experienced a rise in nationalism and military capability.

China has taken many of these islands and turned them into geo-strategic military bases, air strips and harbors. These once vacant islands are now used to host advanced radar capabilities, anti-missile defense systems and safe havens to store military vessels/munition far away from the Chinese mainland. In recent months, in response the U.S. efforts doing the same, China has moved in additional troops, fighter jets and war ships to the region. According to China’s defense ministry, they believe the U.S. is attempting to “curb the rise of China,” trying to prevent them from acquiring and developing more of these islands.

News came out last week that China will be sending in a fleet of 5 ships, including spy planes, to the rim of the U.S. led RIMPAC military drills. The flotilla, including two war ships and a floating hospital, will be sent to monitor the heightened presence of U.S. forces into the area. Foreign Ministry spokeswoman Hua Chunying said on Monday that “China has no interest in any form of Cold War, nor are we interested in playing a role in a Hollywood movie written and directed by certain US military officials. However, China has no fear of and will counter any actions that threaten and undermine China’s sovereignty and security.”

People often talk about the vacuum effect caused by the United States pulling out of Iraq, leading to the rise of ISIS in their absence. What many people are failing to realize is this vacuum effect is now occurring all around the world – for example the South China Sea.

It is no secret, the U.S. as a country is significantly in decline. As a result, other countries such as China, Russia and Iran have all stepped up to fill the vacuum left behind in the global power structure. As the United States is regressing, these countries are progressing. The only thing the United States leads the world in any more, is defense spending and military resources. These are the biggest chips we have left to play.

We might not be at war, but we are dangerously close to setting the stage for this to happen; not just in the South China Sea, but in Yemen, Libya, Iraq, Syria and the Baltic. I sincerely fear the outcomes if/when the United States gets a leader next year, who is not as conservative with our military as Obama has been.

This article (On the Brink of War in the South China Sea and No One is Reporting on It) is a free and open source. You have permission to republish this article using a creative commons license with attribution to the author and AnonHQ. Join the conversations at www.anonboards.com