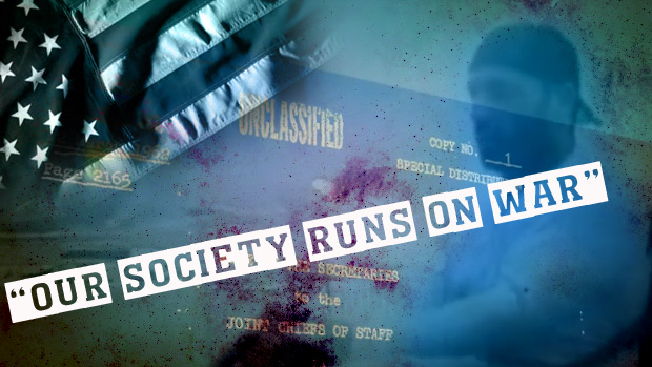 Think that the United States has reached peak austerity, that our military has scaled back since we ended the War in Iraq? Nothing could be further from the truth. A new report has been released that, quite frankly, more Americans need to realize. It chronicles the insanity of the scale of America’s influence on international relations. Whether intentional or not, America is responsible for more “violence” than any country on Earth – supplying 33% of all weapons worldwide.

I say “violence” specifically for a reason. I am not talking brutality; ISIS clearly is more brutal than anyone. I’m not talking about War; Russia has put more troops on the ground and made more airstrikes than the United States has in recent years. I am not even going to get into the debate with U.S. nationalists whether our actions are justified, moral, necessary or not. I am simply talking about violence; war, guns bombs, warships, fighter jet, bullets, explosives, troops, tanks – you name it. Anything necessary to assist people to kill one another.

Of this, no one unleashes more chaos on Earth than the ‘good ole‘ U.S of A.

Recently, amidst heavy tension in Asia-Pacific, the United States ended their trade embargo with Vietnam and  immediately went to work arming the country with American munitions. The whole ordeal is curious all around considering China and Vietnam have recently had political disputes with one another. Despite this, China’s Ministry of Defense praised the move, stating that “we hope the lifting of all such bans will benefit regional peace and development.” Vietnam happens to agree. As Nguyen Ngoc Truong, president of Vietnam’s Center for Strategic Studies and International Development said, the sale of military weapons will bring “peace and stability in the region” because it will make China  “think twice over anything they can do to Vietnam or the South China Sea.”

Quick analysis: an increase in weapons into an already hostile environment will “bring peace”?  Also, why are China and Vietnam, the two countries quarreling, both supporting this landmark deal? We arm Iraq and have the ISIS War’s, we arm Saudi Arabia and we have the Yemen War, we arm Mexico and Columbia and we have the drug War. Doesn’t anyone realize providing weapons to hostile regions does nothing but provoke tensions and result in violence? More importantly, why do things like this keep happening? Why has society never evolved past War? Why is the United States arming countries, in vein, the world over?

Putting all of this aside for a moment, there is also the matter of everything going on with Russia in the Baltic Sea. Last month we published an article Putin – Russia continue to provoke the United States Military. A headline to which many on social media, deservedly so, pointed out where all of these incidents were occurring – the Baltic Sea. This of course is a long way away from the United States and awfully close to Russia. Whom is provoking whom exactly?

There have been a few more incidents; Russia has once again intercepted another American spy plane and buzzed over some more warships. Regardless of which side your on, Russia, or team America, you understand there is no doubt some tension in the area. So, what is the best way to ease the tension? Well, if you are America, you send 1,400 soldiers and 400 tanks/military vehicles to conduct “military training drills” in the region. Coming straight from the top, American officials say doing so is necessary to “establish a dynamic presence” in the region – to intimidate Russian forces.

As if this is not enough, U.S. military spending is only set to explode in 2017 – regardless of which party is in office. The U.S. Senate has already voted to increase military aid to Israel and increase the foreign military aid budget $5.7 billion dollars – both moves receiving bipartisan support.  As for the candidates, Trump says he will “bomb people like we wouldn’t believe.” Despite $537 in defense spending in 2016, more than the next 7 countries combined, top Republicans actually believe “our military is decimated and needs to be rebuilt.” People also believe Hillary Clinton is more likely to start a war than any other candidate.

This article (Believe It or Not, America’s War Machine is Still Growing) is a free and open source. You have permission to republish this article using a creative commons license with attribution to the author and AnonHQ. Join the conversations at www.anonboards.com