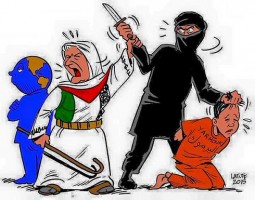 Typically when we hear people responding the reports of others we do not hear ‘this person should teach a class’ or ‘this person dropped some serious knowledge’, but this women does. Her name is Rukmini Callimachi and she a 2 time Pulitzer Prize Award winning author and former New York Times contributor. Rather then summarize her words you should read the news article here first: http://mic.com/articles/129832/this-reporter-dropped-some-serious-isis-knowledge-in-tweet-marathon-after-obama-s-speech?utm_source=policymicFB&utm_medium=main&utm_campaign=social#.RmrHfm4za

In response to the response to her post we here at AnonHQ hope to continue to build upon the conversation. This is a conversation we see a lot about on Youtube, Radio Shows, Fake/Outlandish news sources. Rarely do we ever get a hear to the honest truth about the facts of the matter at hand.

In a less serious article the other day we had a discussion about the differences of the word “Daesh” and about what exactly the Islamic State, ISIS & ISIL all mean. For the purposes of this article we need to take a look at some of this information.

“The Islamic State operates with the stated goal to globalize Sharia Law and to manifest the oft mentioned ‘end of days‘ prophesied by Islamic and Catholic scriptures. Essentially manually creating a self fulfilling prophecy for their religious beliefs.”

The Islamic State is a global caliphate movement, a caliphate essentially means the leadership of Islamic government. The Islamic State believes they are the leaders of Islam and a attempting to “re-gain” control of the Islamic empire and instill global Sharia Law aka Islamic government. It is estimated the total global Muslim population encompasses about 1.6 billion people, or put another way about 24% of the global population. In comparison the highest estimation of ISIS troops was 200,000 in 2014. This was before the U.S. coalition increased its efforts and before Russia got involved. So when people make the mistake of thinking ISIS actually represents the ideology of ISLAM just remember that statistically only fractions of 1% of all Muslims actually follows ISIS caliphate ideology. Here is a glimpse of chapter 5-7 is the Islamic State Charter for example of their extremist rhetoric: https://archive.org/stream/TheGlobalIslamicResistanceCall/The_Global_Islamic_Resistance_Call_-_Chapter_8_sections_5_to_7_LIST_OF_TARGETS_djvu.txt

This leads us to the question why does ISIS exist in the first place? Some people say it is an American – Isreali conspiracy theory! Others say the American CIA is the real ISIS!! There are so many conspiracy theories and so much disinformation out there these days it is hard to know, what is the real truth? The truth of the matter is that in 2011 Barack Obama took the last ground troops out Iraq, closing a War started in 2003. The resistance to Americas presence in the country had never really cease to exist, so when America withdrew the resistance waged a War of their own. This is the group what we now call ISIS.

We have heard and seen in the news over the years that ISIS using American made vehicles, artillery and weapons. This is because when USA left Iraq they left all the equipment behind to the Iraq Army. When the US left the Iraq Army lost quickly to the new/old resistance fighters. So when you hear in the news that America is funding ISIS, or hear the conspiracy that America is ISIS, just understand this is false narrative. Yes ISIS has US equipment, but they have them as a result of defeating the Iraq Army and obtaining the resources America left them. Such is spoils of War. Just facts of the matter, no grand conspiracy needed.

The most difficult topic to discuss perhaps in all of human history. Regardless of if you follow a religion or not you can not deny that fact that religion is central to the state of global affairs we see today. If you believe in some Christian faiths including Catholicism you believe in something called the Book of Revelation. This book talks about a global end time War which will consume the planet in evil and darkness.

What you might not know is that Revelation of Catholic scriptures is similar to to the scriptures of Islam which also discuss the concept of an end of the world battle. Remember above, the stated mission of the Islamic State is to physically manifest this end times War via creating real world events. So if you apply the mission of the Islamic State and cross-reference that to Catholic scriptures you could say the Islamic State is trying manifest the days as express by Christian faiths as well. Did you know that Islam regards Jesus as a prophet, same as Muhammad? Simply that Muhammad was the last prophet God/Allah/YHWH/Jehovah sent to Earth. Islam also believes in a return of Jesus Christ, but when he comes Jesus will officially declare Islam the new religion to make peace. Did you know that according to Islamic scripture that when Muhammad died he went up to heaven to pray with Jesus? The scriptures between ‘rivaling’ religious institutions is more similar then you might think. After all the 3 Abrahamic religions do all share the same creator.

As a society and a religious people we have to ask ourselves, do we really believe this is the end of the world and that we are on the verge of the end times War/Armageddon? If so, one could argue that you agree with ISIS. Ask yourself is that is something you really want to have in common?Human civilization can have a long and bright future if we all believe in working together and working towards the right things. Just as you can try to manifest a self fulfilling prophecy for end times War, you can manifest a self fulfilling prophecy of a more peaceful world. Which future do you choose?

This article “The Islamic State, Conspiracy Theories, Religion…” is free and open source. You have permission to republish this article using a creative commons license with attribution to the author and AnonHQ. Join the discussions at www.anonboards.com