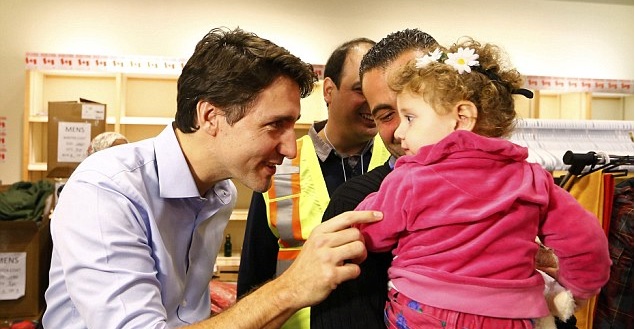 The first Canadian government plane carrying 163 Syrian refugees arrived from Beirut to Toronto on December 10; after the refugees disembarked from the 16-hour flight they were greeted by Prime Minister Justin Trudeau. All 10 of Canada’s provincial premiers, members of the opposition, and ministers of immigration, health and defense, as well as Toronto’s mayor attended the welcoming late Thursday. The refugees arrived just weeks after Trudeau said his country would pull its fighter jets from the US-led coalition targeting Islamic State fighters in Iraq and Syria.

Trudeau, who has pledged to resettle 25,000 refugees by the end of February, said:

“Tonight they step off the plane as refugees. But they walk out of this terminal as permanent residents of Canada with social insurance numbers, with health cards and with an opportunity to become full Canadians… This is something that we are able to do in this country because we define a Canadian not by a skin colour or a language or a religion or a background, but by a shared set of values, aspirations, hopes and dreams that not just Canadians but people around the world share… This is a wonderful night, where we get to show not just a planeload of new Canadians what Canada is all about, we get to show the world how to open our hearts and welcome in people who are fleeing extraordinarily difficult situations.”

The first family was Kevork Jamkossian, a gynecologist from Aleppo, his wife Georgina Zires, a lab technician, and their 16-month-old daughter Madeleine. “We really would like to thank you for all this hospitality and the warm welcome. We felt ourselves at home,” the father told Trudeau through an interpreter. “You are home. Welcome home,” he replied. All of the Syrians who arrived Thursday night have been sponsored by private groups. More than 400 refugees have already arrived on commercial flights since the Liberals took office on November 4.

The Barkel family from Syria heading to Calgary. Dad Samer says he’s grateful for the smiles on his kids faces. pic.twitter.com/Ft1BVPKo9r

While the US is trending “Seal the Borders”, the neighbours are doing a spectacular #WelcomeToCanada https://t.co/nwLZP9BAJV

“They sing historical song that was sung to the Prophet when he sought refuge in Medina. #WelcomeToCanada“beautiful! pic.twitter.com/4jIfEw30Ma

We started the week w/ news of fear & bigotry. But we ended it with this. Well done Prime Minister. #WelcomeToCanada pic.twitter.com/flUTqtVMhk

I am neither Syrian nor Canadian, but #WelcomeToCanada has filled me with hope this morning. Faith in humanity has been restored. Thank you.

The federal government is giving out welcome packages to refugees as they arrive at welcome centres in Toronto and Montreal. Each one includes: Parkas and jackets for youth and adults; two-piece snow suits for kids; one-piece snow suits for infants; tuques, mitts/gloves, socks and snow boots for all; a bag with a maple leaf design‎; a Parks Canada tuque; children’s books.; a copy of the Canadian Charter of Rights and Freedoms, in both English and French; and a National Film Board DVD of silent short films for all ages. Canada’s commitment reflects the change in government after October’s election. The former Conservative government had declined to resettle more Syrian refugees, despite the haunting image of a drowned 3-year-old Syrian boy washed up on a Turkish beach. The boy had relatives in Canada, and the refugee crisis became a major campaign issue. In November, Aylan Kurdi’s aunt said Ottawa had approved her application to bring her brother’s family to Canada.

This Article (Canadian PM Justin Trudeau Welcomes 163 Syrian Refugees At The Airport) is free and open source. You have permission to republish this article under a Creative Commons license with attribution to the author and AnonHQ.com.