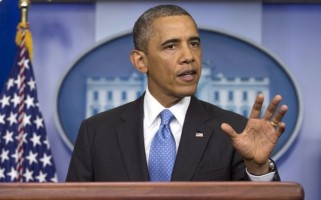 12/6/2015 – President Barack Obama addressed the nation tonight. In a short but concise speech Mr. Obama went on to highlight some of the most fundamentally important issues effecting American society today. For the purposes of this article we will be analyzing his remarks on gun control, War on the Islamic State, Muslim discrimination & Immigration. The entire speech is provided below. If you would like to see an archive of speeches and dates of those to come you can follow Barack Obama here: https://www.whitehouse.gov/live

Barack Obama once again opens a major political speech about this issue and no matter how you see it, gun control debates seem to more prevalent in society today than it has in recent history. President Obama has made it very clear over the years, he is in favor of highly liberal gun control restrictions. However Mr. Obama is currently outmatched by Congress as the Republican Party has the majority leadership in both the House and Senate. In this way no matter how much Mr. Obama would like to enact gun control reform, it is not going to happen. He speaks to this when he says

“I know there are some who reject any gun safety measures. But the fact is that our intelligence and law enforcement agencies — no matter how effective they are — cannot identify every would-be mass shooter, whether that individual is motivated by ISIL or some other hateful ideology. What we can do — and must do — is make it harder for them to kill.”

Another mass shooting on American soil is a tragedy, there is not doubt about this. But when we look at other countries, and the issue facing other nations at this moment in time the are much worse places which exist on this Earth than rural USA.


Recently you may have heard recently from Republican front runners about declaring a War on the Islamic State. These men talk about how we need engage in new Wars and put tens of thousands of combat troops on the ground in the future. President Obama on the other hand proposes a different approach

“We should not be drawn once more into a long and costly ground war in Iraq or Syria. That’s what groups like ISIL want. They know they can’t defeat us on the battlefield. ISIL fighters were part of the insurgency that we faced in Iraq. But they also know that if we occupy foreign lands, they can maintain insurgencies for years, killing thousands of our troops, draining our resources, and using our presence to draw new recruits.”

President Obama goes on to speak about the success the current U.S. led global coalition and how recent support from France, Great Britain, and Germany  “won’t require us sending a new generation of Americans overseas to fight and die for another decade on foreign soil.”

If Republicans truly want to engage in a new War as they advertise, Mr. Obama challenges Congress themselves to take up the courage and vote. In essence Mr. Obama is calling the Republicans bluff. Many Republicans propose a new War and it is a fact the Republican Party has majority share of both the House and Senate. As the President says, if Republicans want their War so badly “it should go ahead and vote to authorize the continued use of military force against these terrorists.”

The American Republican Party has made it very clear that they are heavily in opposition to immigration and many even propose to closing boarders entirely. Democrats on the other hand tend to hold more liberal and open views surrounding immigration. This is why it was surprising to hear Mr. Obama lead a statement by saying

“we should put in place stronger screening for those who come to America without a visa so that we can take a hard look at whether they’ve traveled to warzones. And we’re working with members of both parties in Congress to do exactly that.”‘

“Here’s what else we cannot do. We cannot turn against one another by letting this fight be defined as a war between America and Islam. That, too, is what groups like ISIL want. ISIL does not speak for Islam. They are thugs and killers, part of a cult of death, and they account for a tiny fraction of more than a billion Muslims around the world — including millions of patriotic Muslim Americans who reject their hateful ideology. Moreover, the vast majority of terrorist victims around the world are Muslim. If we’re to succeed in defeating terrorism we must enlist Muslim communities as some of our strongest allies, rather than push them away through suspicion and hate.

That does not mean denying the fact that an extremist ideology has spread within some Muslim communities. This is a real problem that Muslims must confront, without excuse. Muslim leaders here and around the globe have to continue working with us to decisively and unequivocally reject the hateful ideology that groups like ISIL and al Qaeda promote; to speak out against not just acts of violence, but also those interpretations of Islam that are incompatible with the values of religious tolerance, mutual respect, and human dignity…

…Muslim Americans are our friends and our neighbors, our co-workers, our sports heroes — and, yes, they are our men and women in uniform who are willing to die in defense of our country. We have to remember that….

…by coming together around our common ideals as one nation, as one people. So long as we stay true to that tradition, I have no doubt America will prevail. Thank you. God bless you, and may God bless the United States of America.” -Barack Obama 11/6/2015 –


Whether you exist on the liberal Left or the conservative Right, these words from Obama are the founding principals of America that is country was founded upon. Wise words for us all regardless of individual ideology. Remember? The Declaration of Independence tells us:

“We hold these truths to be self-evident, that all men are created equal, that they are endowed by their Creator with certain unalienable Rights, that among these are Life, Liberty and the pursuit of Happiness.–That to secure these rights, Governments are instituted among Men, deriving their just powers from the consent of the governed, –That whenever any Form of Government becomes destructive of these ends, it is the Right of the People to alter or to abolish it, and to institute new Government, laying its foundation on such principles and organizing its powers in such form, as to them shall seem most likely to effect their Safety and Happiness.”

This article “Anonymous News Analysis: President Obama Addresses The Nation” is free and open source. You have permission to republish this article using a creative commons license with attribution to the author and AnonHQ. Join the conversations at www.anonboards.com