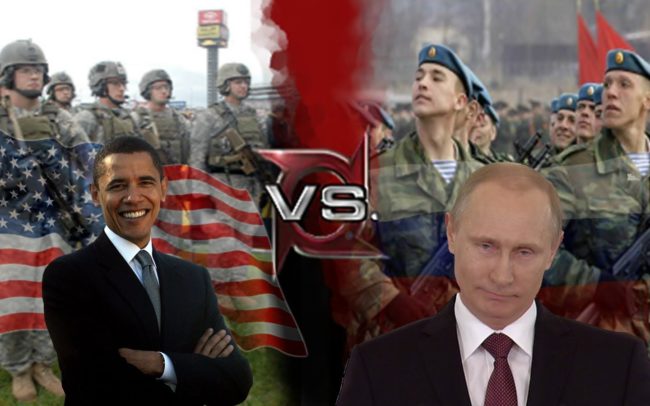 Recently Vladimir Putin has been in the news for on several occasions using his military power to provoke/intimidate United States military personnel stationed overseas. It is not terribly surprising, last year Vladimir Putin was very public in expressing the fact that Russia will be more pro-active in pursuing their national interests. Putin is the first to point out that the United States are the aggressors, hosting nearly 800 military bases internationally compared to just 2 by Russia. All the instances we hear about Russia intimidating us here in the west, remember, all of the incidents are occurring around Russia’s boarder. If the United States was not strategically positioning itself right off their boarders, none of this would be happening.

4-7-2016 | Russia’s air-force intercepts a U.S. spy plane over the Baltic Sea. At the time of the incident the US Spy plane known as RC-135U was flying within 40 miles of the Russian boarder. The sole purpose of this plane is “locating and identifying foreign military land, naval and airborne radar signals” from potential adversaries – such as Russia. Both sides agree the incident occurred over international waters, meaning both countries have the legal right to be flying within. However, as Army Lieutenant Colonel Michelle L. Baldanza explains: “aircraft intercepts are not unusual, but are normally routine events. In this case the intercept was not routine, and the Russian pilot acted in an unprofessional manner that put both the American flight crew and himself at risk.”

According to the reports, the Russian jet performed a barrel roll maneuver in front of the plane, exposing the underbelly of the jet and its contents. Essentially this is meant as a warning, a show of force indicating to the US that the jet was carrying munitions. The jet is said to have flown within 50 feet of the plane before violently propelling itself away, momentarily knocking the plane out of its flight path with the exhaust. The Pentagon filed a formal complaint with TASS and stated “we are protesting the incident with the Russian government.” To which the Russian government replied “air defense forces detected over the Baltic ocean an unidentified aerial target rapidity approaching the Russian border. An Su-27 fighter jet was deployed by the Baltic Fleet to identify the target. The flight of the Russian plane was in accordance with international standards for the use of airspace. No emergency situation occurred.“

4-13-2016 |Russian air-force conducts a routine training mission which ‘happened’ to take them over the direct vacinity of US Destroyer Donald Cook. According to reports, the jets took an “aggressive flight path” around the vessel, prompting immediate concerns of military officials stationed back home in Washington. In a piece of news the western media has conveniently left out, the United States military was simultaneously conducting a Naval training mission of their own with the allied country of Poland. Both countries were practicing missions at the exact same time in the exact same place. In an official statement, Major General Igor Konashenkov of Russia went on to state “On April 13, the pilots of the Russian Air Force Su-24 planes took part in a training exercise over international waters in the Baltic Sea. Their route took them to an area where the USS Donald Cook was present, around 70km from a Russian naval base.”

4-14- 2016 | Russia deploys 11 fighter jets to perform a simulated attack on the US destroyer Donald Cook. Russian forces also deployed a helicopter which is said to have encircled the vessel on several occasions. It is widely presumed the helicopter was there to take high resolution photographs of the technology on board the US vessel. The Donald Cook is said to posses some of the most sophisticated spying technology available, including advanced radar and Patriot missile defense system.

US Navy command called the Russian simulation “unsafe and unprofessional” and secretary John Kerry went on record stating that “We condemn this kind of behavior. It is reckless. It is provocative. It is dangerous. And under the rules of engagement that could have been a shoot-down.”  Russian officials noted the fact that the US vessel was in sight of the Russian naval base at the time and that “the Russian pilots undertook a maneuver that was in accordance with all the necessary safety rules.” The officials also note that the jets carrying out the simulation had all of their weapons removed before flight and that the jets possessed no offensive capabilities.

4-16-2016 | On the heels of the United States launching their first drone Naval vessel with the sole purpose of “hunting submarines“, Russia deploys a large arsenal of newly created submarines. According to sources within the United States military, no one knows the full extent of the Russian submarines program and even top US officials admit they can not match production. In fact, just the opposite is occurring. The number of US submarines in active service is set to drop from 53 in 2016 to 41 by 2020. About the situation, Admiral Mark Furgesson stated “We’re seeing [the Russians] have more advanced weapons systems, missile systems that can attack land at long ranges, and we also see their operating proficiency is getting better as they range farther from home waters. We cannot maintain 100 percent awareness of Russian sub activity today. Our attack subs are better, but not by much. Russian subs pose an existential threat to US carrier groups.”

We are not quite at the tension levels which once existed during the times of the Cold War, but the situation does not seem to be improving itself. This string of headlines in recent weeks may just be short term coincidences or they may be snowballing towards something more serious down the road. For now, lets hope reason and cooler heads prevail. For the sake of Russians and Americans alike.

This article (Russia – Putin Continue To Provoke United States Military) is free and open source. You have permission to republish this article using a creative commons license with attribution to the author and AnonHQ. Join the conversations at www.anonboards.com