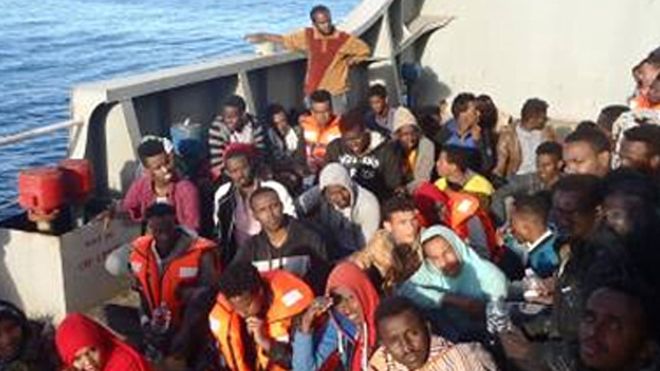 Up to 500 refugees/migrants may have been killed when the boat they were transferred to, capsized in the middle of the night, according to the BBC. The survivors came from Ethiopia, Somalia, Sudan and Egypt. The BBC interviewed two of them, an Ethiopian man named Muaz and a Somali man named Abdul Kadir.

“My wife and my baby drowned in front of me,” Muaz said, claiming that that at least 500 others were killed.  “I was one of the few who managed to swim back to the smaller boat.”

“Two hundred and forty of us set off from Libya but then the traffickers made us get on to a bigger wooden boat around 30m in length that already had at least 300 people in it,” said Kadir.

The migrants apparently departed from a Libyan port in Tobruk, en route to Italy. In the Mediterranean, they were transferred from a smaller boat to a larger one that was already overcrowded with over 300 people. The larger ship capsized,  and the survivors were saved by a cargo ship.

The cargo ship’s crew told the BBC that the migrants refused to be handed over to the Greek coastguard, as they still wanted to reach Italy.

The Somali embassy in Cairo stated that nearly 400 had drowned, while the UNHCR tweeted that the “Information on boat disaster killing 400+ #refugees at Mediterranian appears inaccurate”

The incident comes nearly a full year after 800 refugees were killed when their boat capsized.

This article (Hundreds Drown after Refugee Boat Capsizes, According to Survivors) is a free and open source. You have permission to republish this article under a Creative Commons license with attribution to the author(CoNN) and AnonHQ.com.