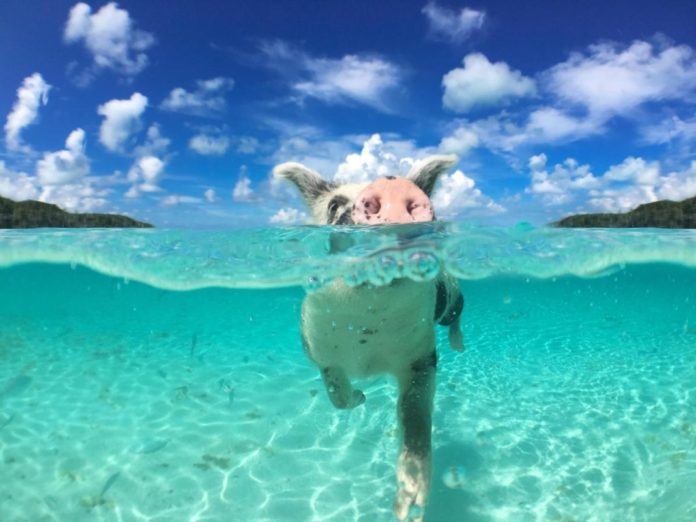 More than a half a dozen of the famed swimming pigs of Bahamas have been found dead after rowdy tourists reportedly fed the adorable hogs beer, rum, hotdogs, and junk food. The mysterious deaths near the ‘Pig Beach’ on Big Major Cay, an uninhabited Bahamas island, have forced the government to ban tourists from feeding the porcine creatures.

Seven pigs have died so far; the majority of the pigs, about 15, are still alive, although some reports claim the figure was just seven or eight. Wayde Nixon, one of the pig’s owners, told The Nassau Guardian:

“The pigs were given the wrong food. We had the government vet in there [who] examined them all thoroughly. He gave them shots, he gave them medicine, and I was there and I worked with them for three days straight.

“We had those pigs there [for] almost 30 years, and never has this happened before, but now we are going to have to regulate it. Right now it’s blowing out of proportion with people, anybody, bringing food there, anybody doing what they [want to] do. We have people coming there giving the pigs beer, rum, riding on top of them, all kinds of stuff.” Even as V Alfred Gray, Bahamas’ minister of agriculture and fisheries, banned the visitors from feeding the swimming pigs yet allowed the selfie-crazy rich and famous (from Donald Trump Jr to actress Bella Thorne) to swim with the pigs, as well as click pictures with the four-legged residents, he stressed the island hogs died from eating too much sand.

“As you know some people feed the pigs as they swim in the water, other people throw things on the sand for them to eat from the sand. You know sand is indigestible, sand cannot be digested, and the autopsy which was performed on one or two of the animals showed that they had a good amount of sand in their stomach. Sand not being able to be passed out by normal processes or digested had something to do with those animals having died.

“They died because of that kind of ingestion. That’s the conclusion the veterinarian drew from his autopsy. We’ve sent blood samples off to labs to be tested to see whether there is any other contributing factor but to him that was the main cause, preliminarily found to have affected the lives of those animals.” However, PETA smells foul play behind the mysterious deaths:

“Tourists have reported peeling skin and abrasions on piglets forced to live in the tropical sun without any mud (their natural sunblock) to roll around in. With little vegetation on the island, they rely on food from tourists — some of whom supposedly supply them with alcohol and junk food.

“To control their populations, adult pigs are reportedly slaughtered to make way for babies — a fact that, of course, doesn’t make it into the ads and brochures that promote this travel destination. Pigs average 10 babies per litter and can have 2 or 3 litters a year. Due to high birth rates and the availability of food from tourists, the pig population is ever increasing.”

Until their bodies were found floating in the Exuma Cays in February, tourists were free to feed the famous pigs without restriction. According to the Bahamas Ministry of Tourism website, “the pigs, though feral, are exceptionally friendly, running from under the shade of the almond trees to greet visitors that bring them treats; they are also fed by the crews of passing yachts and vessels.” The Star reports:

“The pig colony endured an invasion of bikini-clad reality show contestants during an episode of “The Bachelor”. The pigs had a brief cameo in the 2013 music video for “Timber”, the Pitbull dance-pop number featuring Kesha. Fuelled by celebrity visits, a feature on NBC’s “Today Show” and a beach made for Instagram, the pigs’ popularity expanded.”

Will allowing tourists to photograph the swimming pigs prevent them from feeding the animals? Did the swimming pigs die of alcohol, sand, or poisoning? Please share your thoughts in the comments section below…

This article (Heartbreaking: Drunk Tourists Kill Half of Bahamian Swimming Pigs with Alcohol) is a free and open source. You have permission to republish this article under a Creative Commons license with attribution to the author and AnonHQ.com. 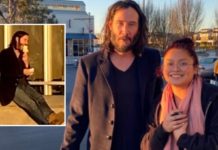