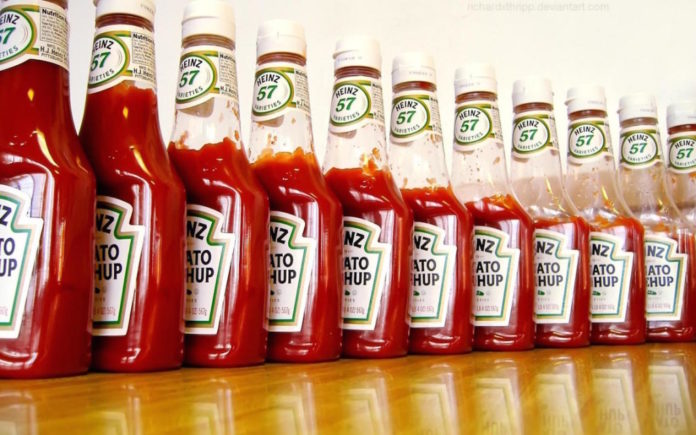 Following a lobbying campaign by Osem, which owns the biggest selling ketchup in the country, Israel’s Health Ministry in 2015 ruled that Heinz ketchup does not contain a sufficient amount of “tomato solids” for it to be classified as ketchup, downgrading it instead to “tomato seasoning”. Israeli food standards require ketchup to hold 41% of tomato concentrate; Heinz only held 21% of tomato concentrate.

However, it’s not the only reason to avoid the world’s favorite brand (that’s what the company claims). Heinz Ketchup is not only unhealthy but extremely toxic and quite dangerous to consume over time. 5 reasons why you should be cautious about this condiment:

1. High Fructose Corn Syrup: The FDA doesn’t list ketchup as lethal. But since high fructose corn syrup can kill you, you are not safe either. This toxic ingredient made from heavily genetically modified corn is a major cause of heart disease, obesity, cancer, dementia, liver failure, tooth decay, and diabetes. Once metabolized by your body, it can lead to a sharp spike in your blood sugar levels, wreak havoc with your immune system, and damage your liver.

“Mercury is toxic in all its forms. Given how much high-fructose corn syrup is consumed by children, it could be a significant additional source of mercury never before considered. We are calling for immediate changes by industry and the [US Food and Drug Administration] to help stop this avoidable mercury contamination of the food supply,” the Institute for Agriculture and Trade Policy’s Dr. David Wallinga, a co-author of both studies, had warned.

2. Sugar: Heinz Tomato Ketchup contains 23.6 grams sugar per 100 grams. According to the American Heart Association, the maximum amount of added sugars you should eat in a day is (for men) 37.5 grams or 9 teaspoons and (for women) 25 grams or 6 teaspoons per day. A tablespoon-size serving has 4 grams of sugar. 1 tablespoon = 3 teaspoons. Who eats only 1 tablespoon? For visual delight, watch the video below:

3. Distilled Vinegar: A lawsuit filed in 2014 alleged that Heinz Distilled Vinegar was not all natural but was made from genetically modified corn, which is grown with toxic pesticides and chemicals. The term distilled vinegar is something of a misnomer, because it is not produced by distillation but by fermentation of distilled alcohol. The fermentate is diluted to produce a colorless solution of 5% to 8% acetic acid in water, with a pH of about 2.4. The pH scale runs from 0 to 14. Values below 7 are acidic.

4. Sodium: The biggest problem with ketchup is that it is high in sodium. One tablespoon can contain up to 190 milligrams of sodium. Heinz Tomato Ketchup contains 907 milligrams sodium per 100 grams – that’s 37% of current recommended limit for many people (2450 milligrams each day).

This Article (Heinz Isn’t Ketchup: 5 Reasons You Must Avoid It) is free and open source. You have permission to republish this article under a Creative Commons license with attribution to the author and AnonHQ.com.