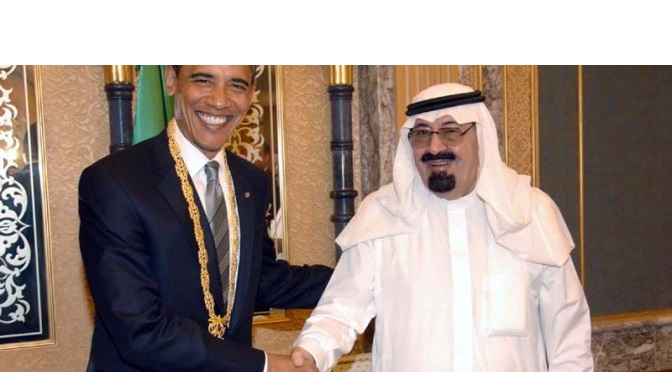 It’s been 13 years since Al-Qaeda attacked the United States on 9/11. The world knows that. However, what the world doesn’t know is that there is“incontrovertible evidence” that Saudi Arabia, a presumed US ally, helped the hijackers of four passenger airliners used in suicide attacks financially and logistically. Those who helped the hijackers, according to CIA findings, included wealthy Saudi hardliners, high-level diplomats and intelligence officers employed by Saudi Arabia. Al-Qaeda did not act alone; the terrorist attacks were state-sponsored.

An entire section of Congress’ investigative report on 9/11, which dealt with “specific sources of foreign support”, mentions that out of 19 hijackers, 15 were Saudi nationals. The Saudis deny any role in 9/11, but the intelligence files cited in the report directly implicate the Saudi embassy in Washington and consulate in Los Angeles in the attacks, making 9/11 not just an act of terrorism, but an act of war.

President George W Bush in 2002 mysteriously censored 28 pages of the 800-page report “Joint Inquiry Into Intelligence Community Activities Before and After the Terrorist Attacks of September 11, 2001”. In a video released in July 2014 by Thomas Massie, Congressman who represents Kentucky’s 4th District, called for the truth of 9/11 to be told to America. He personally reviewed the 28 redacted pages, and felt that the disclosure would not jeopardize country’s national security.

On January 7, 2015 Representatives Walter B. Jones (NC-3), Stephen Lynch (MA-8), and Senator Bob Graham (FL) held a press conference to announce the introduction of a new House Resolution which calls on President Barack Obama to declassify the 28 pages classified by President Bush shortly after the report was released.

At the press conference, former Senator Bob Graham said, “the 28-pages point a strong finger at Saudi Arabia as being the principal financier of the attacks”. “The secret pages are part of “a general pattern of cover-up” aimed at keeping Americans in the dark,” Graham added, “even though it’s highly improbable that the 19 hijackers acted alone, the US government’s position is to protect the government most responsible for that network of support.” “Saudis have continued, maybe accelerated their support for the most extreme form of Islam,” Graham said, while pointing out that A-Qaida and ISIS are “a creation of Saudi Arabia”.

Terry Strada, co-chair of 9/11 Families United for Justice Against Terrorism, said, “Private citizens and Congress must take action against those who are responsible for aiding and abetting the 19 hijackers that murdered nearly 3,000 innocent people on American soil no matter who they may be, no matter what government they are, no matter what country they come from”.

The findings are expected to reveal that the hijackers were in constant touch with several Saudi officials and agents inside the United States as they were preparing to terrorise the county. A New York Post Investigation suggests that there indeed were ‘specific sources of foreign support’ (read Saudi VIPs) to the hijackers while they were in America. New York Post author Paul Sperry goes on citing instance after instance where Saudi intelligence directly aided Al-Qaeda at every step.

According to Sperry, Saudi consulate official Fahad al-Thumairy allegedly arranged for an advance team to receive two of the Saudi hijackers — Khalid al-Mihdhar and Nawaf al-Hazmi — as they arrived at Los Angeles International Airport in 2000. One of the advance men, Omar al-Bayoumi, a suspected Saudi intelligence agent, left the LA consulate and met the hijackers at a restaurant. Bayoumi and another suspected Saudi agent, Osama Bassnan, set up a forward operating base in San Diego for the hijackers after leaving LA. They would constantly meet the American Al-Qaeda cleric, Anwar al-Awlaki, at a Saudi-funded mosque he ran in a nearby suburb.

Then-Saudi Ambassador Prince Bandar and his wife sent checks totalling some $130,000 to Bassnan while he was handling the hijackers. “Other Al-Qaeda funding was traced back to Bandar and his embassy – so much so that by 2004 Riggs Bank of Washington had dropped the Saudis as a client. The next year, as a number of embassy employees popped up in terror probes, Riyadh recalled Bandar.” In its investigation, New York Post accused Bandar of planning 9/11 and that he fled Washington to avoid prosecution.

In 2001, Awlaki and the San Diego hijackers met at the Dar al-Hijrah Islamic Center, a Pentagon-area mosque built with Saudi Embassy funds. As its imam, Awlaki helped the hijackers acquire IDs before they attacked the Pentagon. He fled the United States on a Saudi jet about a year after 9/11.

On the eve of the attacks, top Saudi government official Saleh Hussayen checked into the same Marriott Residence Inn near Dulles Airport as three of the Saudi hijackers who targeted the Pentagon. 9/11 instigator Mohamed Atta and other hijackers visited a home owned by Esam Ghazzawi, a Saudi adviser to the nephew of King Fahd, in Florida. The abode was abandoned just two weeks before 9/11.

It is clear that President Bush was aware that neither Afghanistan nor Iraq were involved in 9/11 and that military action against these two was done to cover involvement (that included support from foreign intelligence agencies) of his administration in 9/11.

According to New York Post investigation, on September 13, 2001, the FBI evacuated dozens of Saudi officials as well as Osama bin Laden family members from the United States. Bush and Bandar, the two old family friends, shared cigars on the Truman Balcony of the White House while discussing the attacks just two days after 9/11. From a CIA transcript dated September 24, 2001, Osama bin Laden is quoted as saying: “The United States should try to trace the perpetrators of these attacks within itself; the people who are a part of the US system, but are dissenting against it. Or those who are working for some other system; persons who want to make the present century as a century of conflict between Islam and Christianity so that their own civilization, nation, country, or ideology could survive”. In May 2003, a frustrated Bob Graham, Chair of the Joint Committee on 9/11, had warned National Commission on Terrorist Attacks Upon the United State, “State-sponsored terrorism substantially increases the likelihood of successful and more ­lethal attacks within the United States”. He advocated the 28 missing pages be classified as soon as possible to accomplish important objectives, like providing Americans a better understanding of the Intelligence Community’s role prior to 9/11, informing them what was known about Al-Qaeda and threats of domestic terrorism prior to 9/11, and allowing all Americans to hold accountable the agencies and individuals for their actions or lack of actions prior to 9/11.

Eight years after the 9/11 terrorist attacks, Hillary Clinton, wrote in a cable leaked by WikiLeaks that “Saudi Arabia remains a critical financial support base for al-Qaeda, the Taliban, LeT (Lashkar-e-Taiba in Pakistan) and other terrorist groups”. The findings of the 28-page section detailing the role of foreign governments in financing the 9/11 attackers must be released. If a foreign power country can organize synchronized attacks on America’s pride 13 years ago, it can repeat the frightening act with even more intensity. The real threat to US national security is the non-disclosure of those 28 pages, and not their disclosure. The million-dollar question, however, is: If the 28 pages are classified, will the investigation stop with the Saudis?