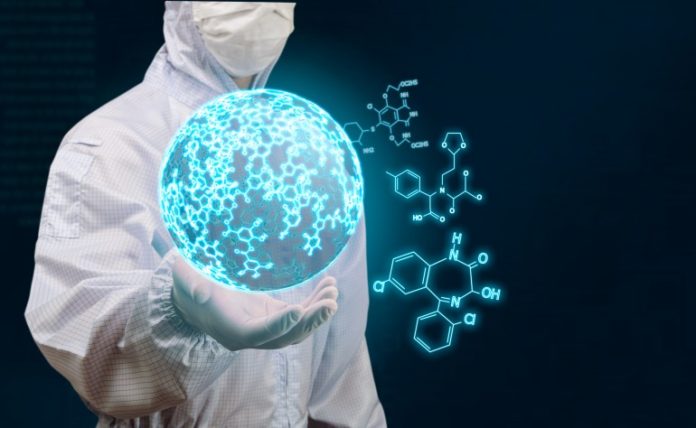 Scientists are on the verge of the possibility of creating ‘synthetic life’ – the development of a form of artificial evolution, with simple apparatus and without DNA.

The team comes from the University of Glasgow’s School of Chemistry. They reported in a research paper titled, “Nature Communications,” on the 8th of December 2014 as to how they managed to create an evolving chemical system for the first time. The process was not possible without robotic aid and has the potential to be used in the future to perform specific tasks.

How does it work?

Due to the ability to inherit and exhibit variation and undergo selection by the environment over dominance, nature has created extremely complex and sophisticated biological systems. The scientists therefore hypothesized that the construction of a robot capable of producing well-defined chemical formulations presented as discrete physical objects, in this case oil droplets, could be used as a platform to drive the evolution of populations of the oil droplets. Such a platform would not only require a robot to produce and mix the chemical formulations, but also to produce the objects as oil droplets in a dish, and this would be driven by software programmed to perform that. The droplets would then be observed by a sensor system, here a video camera, and then the droplet compositions varied using an evolutionary algorithm that could develop the desired properties of the droplets against a well defined desired test. The reason they were interested in formulating oil-droplet formulations using a robotic system was to see whether they could achieve the robot-driven evolution of these oil droplets, and over multiple successive generations, observe correlations between droplet behavior and composition analogous to genotype-phenotype correlations from analogous biological experiments. Such simple oil droplets could be used as models for primitive protocells since they are characterized by an interface (for example, oil–water) or membrane separating the inside and the outside of the cell; yet they are so primitive that they had been considered to lack genetic material. However, theoretical simulations using the Graded Autocatalysis Replication Domain model clearly suggest that formulations or ‘compositions’ such as those proposed here, could be evolvable. This approach therefore paves the way for exploring complex chemical systems by embodied evolution, as well as a better understanding of the minimal infrastructure required for the evolution of chemistry outside of biology. Image Source: University of Glasgow – (a) Side-on view of a droplet being placed by the syringe into the aqueous phase. (b) Microscope image of a typical droplet showing the chemical components of the system. Arrows show the partitioning into the aqueous phase of the oils, the larger arrow for pentanol denotes far greater aqueous solubility than that for octanol. (c) Droplets being tracked by the image analysis software, one of the droplets are undergoing division and its distorted shape is not recognized as circular by the software. (d) Image of the daughter droplets from the fission of the distorted droplet from c being recognized by the image analysis software.

The process of assisting the evolution via the robot is itself important since the automation will allow us to do many comparisons, as well as a large number of experiments under well-controlled conditions. In addition, by varying the input ‘compositions,’ it is hypothesized that emergent behavior will result from this coupling, such as that seen in soft robotics whereby morphology and topology have been combined. Indeed, the development of hybrid chemo-robotic systems capable of combinatorial oil droplet formations, as well as assisting the process of evolution, has not been possible because of many hardware and software constraints. These requirements include the need to develop a fluid-handling robotic system with autonomous control, sensing the ability to reliably generate a large population of droplets, as well as the automation of the oil droplets formation, evaluation & cleaning cycle. In addition, solving these issues is also of potential benefit in other areas such as the emerging field of systems chemistry, which seeks to understand and explore the complex chemical systems, networks and emergent behaviors that arise from very simple inputs. Juan Manuel Parrilla Guierreza Head of Research for this project said, “In our work we have developed a novel means of exploring complex chemical systems by controlling the interface between robotics, artificial intelligence, complex chemical systems and evolutionary dynamics.” Image Source: University of Glasgow – Photograph showing the pumps: cleaning and oil phases, the mixing array, the syringe array held in the X–Y stage, the evolutionary arena, the optical imaging system held below the evolution arena, the motors controlling the X–Y carriage and the computer interface.

As we know, self-propelled oil droplets have long been studied as primitive chemical machines, transferring chemical energy to kinetic energy. The key mechanism for the motion of oil droplets in aqueous media is the Marangoni effect, an asymmetry of interfacial surface tension around the droplet. Small inhomogeneities in the surface of the aqueous phase cause the droplet to no longer be completely symmetrical, meaning that the surface tensions around the droplet become unbalanced and the droplet is pulled in a certain direction. Certain oils, such as pentanol form droplets on the surface of an aqueous phase but dissolve at a rate dictated by their aqueous solubility. This results in an increase in concentration of the oil in the aqueous phase close to the droplet, and therefore a decrease in interfacial tension at the trailing edge of a moving droplet. This surface tension gradient is responsible for rapid movement and deformation, which sometimes splits the droplet apart. A chemical reaction such as deprotonation of a carboxylic acid to produce an anionic surfactant may result in asymmetric accumulation of the surfactant product at the oil & water interface, further contributing to the asymmetry of surface tension. In further research work, scientist were able develop a means of exploring complex chemical systems by controlling the interface between robotics, artificial intelligence, complex chemical systems and evolutionary dynamics.