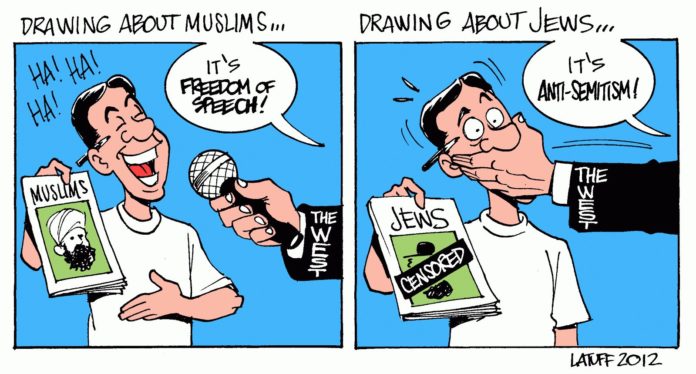 The cartoon world’s double standards on freedom of speech…

Charlie Hebdo mocks the prophet Muhammad through insulting cartoons and calls it satire. As a result, half of the magazine’s staff is wiped out by terrorists in the name of Allah. The massacre raises questions about “freedom of speech.” The cartoon world, media, governments and intellectuals all have double standards regarding the answer.

When the world was condemning the January 7th attack on the satirical magazine, Muslim heroes were being applauded and world leaders and dignitaries were walking in a march for unity, although it was not shoulder to shoulder:

Critics suggest images show dignitaries ‘didn’t lead march’ after all, but many still speak positively about display of global unity

Then came the breaking news – a reminder that 80-year-old Maurice Sinet, political cartoonist with Charlie Hebdo for 20 years, was fired in 2009 for his anti-Semitic cartoons mocking the relationship of former French President Sarkozy’s son with a wealthy Jewish woman. Maurice Sinet, known to the world as Siné, faced charges of “inciting racial hatred” for a column he wrote in July 2009. “L’affaire Sine,” followed the engagement of Jean Sarkozy to Jessica Sebaoun-Darty, the Jewish heiress of a major consumer electronics company, the Darty Group. Commenting on rumours that Jean intended to convert from Catholicism to Judaism (Jessica’s religion) for social success, Siné quipped, “He’ll go a long way in life, that little lad.”

It didn’t take long for Claude Askolovitch, a high-profile political journalist, to accuse Siné of anti-Semitism. Charlie Hebdo‘s editor, Philippe Val, who re-published Jyllands-Posten’s controversial cartoons of the prophet Mohammed in the name of ‘freedom of press’ in 2006, agreed that the piece was offensive and asked Siné to apologize. Siné refused, saying, “I’d rather cut my balls off.” He was fired and taken to court by the Ligue Internationale Contre le Racisme et l’Antisémitisme (LICRA), an organization which works to promote racial tolerance. In December 2010, Siné won a €40,000 court judgment against his former publisher for wrongful termination.

Charlie Hebdo publishes cartoons insulting Islam and Muslims as well as Jesus and Christianity, and tags them as “freedom of speech.” However, in the case of Siné, it failed to stand firm on its provocative “freedom of speech” stance.

Latuff added that the motive behind the urge to mock Islam remains unknown. “Who knows? Hatred against Muslims, testing the limits of freedom of speech, mocking Muslims just for fun, who knows? However, the fact is that they [Charlie Hebdo editors] died not for a good cause, what could be seen as noble, but for provoking Muslims and feeding the hatred against Islam.”

These are some of Latuff’s cartoons that speak a thousand words: Wikileaks, on January 8, blamed the persecution of Siné (at the request of a Jewish “pro-censorship” lobby) for legitimizing the terrorist attacks on Charlie Hebdo. The American Jewish Committee reprimanded key media outlets in the UK and US, including the London Daily Telegraph, The New York Times, CNN, and NBC for omitting and blurring many cartoons published by Charlie Hebdo that motivated Muslims to attack the magazine.

“Through this act of self-censorship, these news organizations are depriving the public of its right to know exactly what Charlie Hebdo had done to arouse the ire of the jihadists,” said AJC Executive Director David Harris. “Keeping this information from the public not only betrays the canons of free journalism, but also furthers the goal of the killers and their sympathizers: to create an atmosphere of fear where freedom of expression is limited and make Islam, alone among all other world religions and secular ideologies, immune from public criticism.”

US comic book artist, Art Spiegelman, also denounced the hypocrisy of the US press for declining to republish the Charlie Hebdo cartoons. The creator of Maus, a graphic novel about the Holocaust, said, “I think it’s so hypocritical to drape yourself in freedom of speech and then self-censor yourself to the point where you are not making your readers understand the issues.”

“We have a standard that is long held and that serves us well: that there is a line between gratuitous insult and satire. Most of these are gratuitous insult,” said Dean Baquet, executive editor of The New York Times, defending the decision to not publish the cartoons.

Dean’s response, however, failed to cool Spiegelman down. “When religion overlaps with social and political issues, it’s necessary to fight back, so Charlie is equally hard on Jews including anti-Semitic caricatures and quotes when talking about Israel. The equal opportunity insult that came with Charlie Hebdo was the reason it’s estimable,” he added.

However, what they failed to see was that Charlie was demanding “freedom to criticize” Islam but was repressing criticism of Judaism – the reason Siné was canned. Take a look at the below cartoons, and try to answer objectively: Are Charlie Hebdo and ‘freedom of speech’ really synonymous?