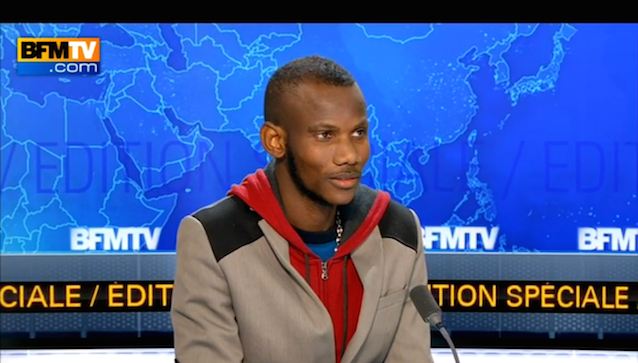 The young Muslim who saved Jews from an Islamist terrorist: Lassana Bathily, a 24-year-old young employee at Paris Kosher grocery store Hyper Cacher, hid several customers inside a freezer in the grocery’s basement when Amedy Coulibaly, a gunman, laid siege to his workplace on January 9, two days after the dreadful terror attack on Charlie Hebdo. Those 15 people he led to safety were Jews, and he was a Muslim. Amedy, after opening fire and killing 4, took several shoppers hostage and threatened to kill them if police stormed the printing shop where Cherif and Said Kouachi, who killed 12 people in one of France’s worst terrorist attack in a generation, were holed up.

Lassana told BFMTV: “I went down to the freezer, I opened the door. There were several people who went in with me. I turned off the light and the freezer. I brought them inside and I told them to stay calm here, I’m going to go out. When they got out, they thanked me”.

Heroes deserve recognition and exposure. And Twitterati did exactly that:

.@rupertmurdoch: if all Muslims are to blame for the #CharlieHebdo murders, should all Muslims take credit for Lassana Bathily’s heroism?

The Muslim cop who was murdered during the Charlie Hebdo attack: When the Al-Qaeda backed Islamist terrorists attacked the office of Charlie Hebdo, they fatally shot a police officer at point blank range after he heroically tried to stop them escaping. He was a Muslim and his name was Ahmed Merabet. “He was on foot, and came nose to nose with the terrorists. He pulled out his weapon. It was his job, it was his duty,” said Rocco Contento, a colleague.

Twitter stood in solidarity with the Paris victims with #JeSuisCharlie hashtag. Ahmed was honoured with #JeSuisAhmed hashtag.

I am not Charlie, I am Ahmed the dead cop. Charlie ridiculed my faith and culture and I died defending his right to do so. #JesuisAhmed

“I do not agree with what you have to say, but I’ll defend to the death your right to say it.” Voltaire #JeSuisAhmed

This is what Ahmed’s brother Malek Merabet said in a moving tribute on January 10:

“My brother was Muslim and he was killed by two terrorists, by two false Muslims. Islam is a religion of peace and love. As far as my brother’s death is concerned it was a waste. He was very proud of the name Ahmed Merabet, proud to represent the police and of defending the values of the Republic – liberty, equality, fraternity.”