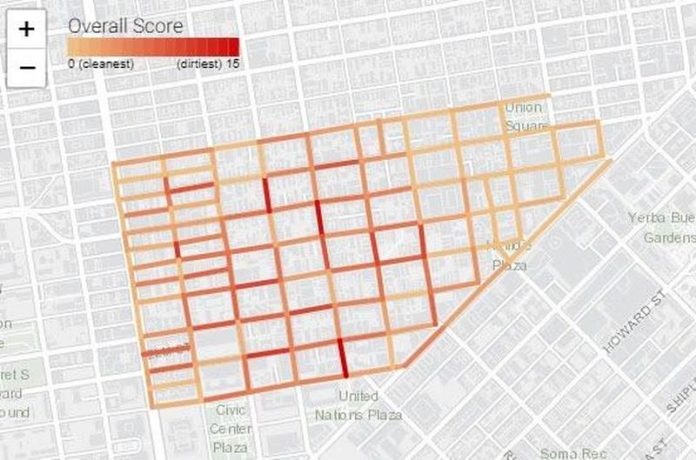 The NBC Bay Area Investigative Unit surveyed a section of downtown San Francisco to determine the amount of feces, hypodermic needles, and garbage littering the heart of the city. The results reveal a disgusting and potentially deadly mix of contamination that experts now believe could exceed some of the dirtiest slums in the world...

As the Investigative Unit photographed nearly a dozen hypodermic needles scattered across one block, a group of preschool students happened to walk by on their way to an afternoon field trip to city hall.

“Sometimes they ask what is it, and that’s a conversation that’s a little difficult to have with a 2-year old, but we just let them know that those things are full of germs, that they are dangerous, and they should never be touched.”

In light of the dangerous conditions, part of Orellana’s responsibilities now include teaching young children how to avoid the contamination.

‘There’s Poop in There’

“The floor is dirty,” said A’Nylah Reed, a 3-year-old student at the preschool, who irately explained having to navigate dirty conditions on her walks to school.

“There is poop in there,” she exclaimed. “That makes me angry.”

Kim Davenport, A’nyla’s mother, often walks her daughter to the Compass preschool on Leavenworth Street in San Francisco. She said she often has to pull her daughter out of the way in order to keep her from stepping on needles and human waste. “I just had to do that this morning!”

The Investigate Unit spent three days assessing conditions on the streets of downtown San Francisco and discovered trash on each of the 153 blocks surveyed. While some streets were littered with items as small as a candy wrapper, the vast majority of trash found included large heaps of garbage, food, and discarded junk. The investigation also found 100 drug needles and more than 300 piles of feces throughout downtown.

“If you do get stuck with these disposed needles you can get HIV, Hepatitis C, Hepatitis B, and a variety of other viral diseases,” said Dr. Lee Riley, an infectious disease expert at University of California, Berkeley. He warned that once fecal matter dries, it can become airborne, releasing potentially dangerous viruses, such as the rotavirus. “If you happen to inhale that, it can also go into your intestine,” he said. The results can prove fatal, especially in children.

Riley has researched conditions across the poorest slums of the world. His book titled, “Slum Health,” examines health problems that are created by extreme poverty.

Based on the findings of the Investigative Unit survey, Riley believes parts of the city may be even dirtier than slums in some developing countries.

“The contamination is … much greater than communities in Brazil or Kenya or India,” he said.

He notes that in those countries, slum dwellings are often long-term homes for families and so there is an attempt to make the surroundings more livable. Homeless communities in San Francisco, however, are often kicked out from one part of town and forced to relocate to another. The result is extreme contamination, according to Riley.

‘We Aren’t Addressing the Root Cause’

“We’re losing tourists. We’re losing conventions in San Francisco. All of this is happening because we aren’t addressing the root cause, which is we need more temporary beds for street homelessness.”

Ronen believes San Francisco has been too focused on permanent housing for the homeless and that the city has neglected to provide enough temporary shelter, which can provide the homeless a respite from the streets. The city currently has about 2,000 temporary beds. Ronen, however, believes an additional 1,000 are needed, at a cost of about $25 million.

“We need to find a source of revenue,” said Ronen.

“Whether that’s putting something on the ballot to raise business taxes or taking a look at our general fund and re-allocating money towards that purpose and taking it away from something else in the city.”

Until the problem is fixed, Mohammed Nuru, the Director of the Public Works Department, is charged with the towering task of cleaning the streets, over and over again. “Yes, we can clean, he said, “and then go back a few hours later, and it looks as if it was never cleaned. So is that how you want to spend your money?”

The 2016-2017 budget for San Francisco Public Works includes $60.1 million for “Street Environmental Services.” The budget has nearly doubled over the past five years. Originally, that money, was intended to clean streets, not sidewalks.

According to city ordinances, sidewalks are the responsibility of property owners. However, due to the severity of the contamination in San Francisco, Public Works has inherited the problem of washing sidewalks. Nuru estimates that half of his street cleaning budget – about $30 million – goes towards cleaning up feces and needles from homeless encampments and sidewalks.

A single pile of human waste, said Nuru, takes at least 30 minutes for one of his staffers to clean.

“The steamer has to come. He has to park the steamer. He’s got to come out with his steamer, disinfect, steam clean, roll up and go.”

Asked if he’d be willing to give up part of his budget and allocate it to more directly addressing the homeless problem – which would likely alleviate his cleaning problem – Nuru said, “The Board of Supervisors, the mayor – those are decisions that they need to make.”  He added, “I want to continue cleaning and I want to be able to continue to provide services. The Public Works Department provides services seven days a week, 24 hours a day.”

Ronen acknowledges that finding the money to provide 1,000 additional beds for the homeless may very well take years. The city is planning on opening three new Navigation Centers for homeless people by the summer, but two centers will also be closing.

“We’re not going to make a huge dent in this problem unless we deal with some underlying major social problems and issues,” she said.