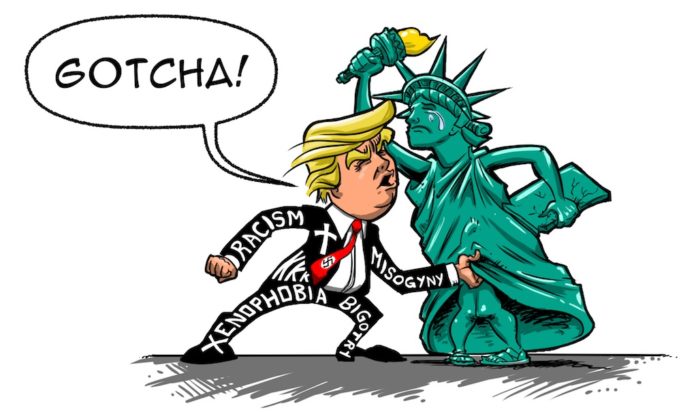 U.S. President Donald Trump is the man who called women “beautiful pieces of ass” and “gold diggers,” dubbed breastfeeding women “disgusting,” and compared women to buildings. Trump rated women he wanted to have sex with, told The New York Times columnist Gail Collins she had the “face of a dog,” and speculated that Fox News host Megyn Kelly had “blood coming out her wherever.” Trump also claimed Hillary Clinton couldn’t “satisfy” her husband, and bragged about “grabbing women by the pussy.” All this came from the man that has just given unrestricted powers to all his male supporters by quietly revoking the 2014 Fair Pay and Safe Workplaces order.

The repeal of the Obama-era order (which the former president put in place to ensure paycheck transparency and ban forced arbitration clauses for sexual harassment, sexual assault, or discrimination claims) means federal contractors don’t have to provide proof that they’re complying with the country’s 14 labor and civil rights laws.

Noreen Farrell, director of Equal Rights Advocates (an anti-sex discrimination law firm), told NBC News: “We have an executive order that essentially forces women to pay to keep companies in business that discriminate against them, with their own tax dollars. It’s an outrage.”

A 2010 Government Accountability Office investigation revealed that while companies with rampant violations were being awarded millions in federal contracts, forced arbitration clauses were being commonly used to keep sex discrimination claims out of the courts and off the public record.

Remember women who had sexual harassment claims against trump?

“Arbitrations are private proceedings with secret filings and private attorneys, and they often help hide sexual harassment claims. It can silence victims. They may feel afraid of coming forward because they might think they are the only one, or fear retaliation.”

In her speech at the Republican National Convention, Ivanka Trump promised “as President, my father will change the labor laws that were put into place at a time when women were not a significant portion of the workforce.” Yet Donald Trump silently rolled back the only protection available to women in the workplace. In fact, the March 27 order was criticized heavily on April 4, when, ironically, Ivanka celebrated “Equal Pay Day” on her Twitter account.

Today is #EqualPayDay. This is what @realDonaldTrump has to say about women closing the #PayGap pic.twitter.com/1fykJ5eiuB

#EqualPayDay is a reminder that women deserve equal pay for equal work. We must work to close the gender pay gap! https://t.co/CcwsoBXWdF

The revocation of the Fair Pay and Safe Workplaces order not only leaves women vulnerable to workplace abuse (companies can continue to force sexual harassment cases into secret proceedings), it ensures women are continued to be paid less than their male colleagues (women in America currently earn 83 cents for every dollar earned by men doing the same job).

Blumenthal argues Trump’s overturning of the Fair Pay order sends women’s rights in the workplace back “to a time best left to Mad Men”:

“These cover-up clauses render people voiceless — forcing them to suffer in silence, suppressing justice, and allowing others to fall victim in the future. At a time when the fight for equal pay continues, Trump also moved to eliminate paycheck transparency and leave workers to negotiate in the dark.”

This article (ICYMI: Trump Makes It Easier for Men to Sexually Harass Women, AND Get Away with It) is a free and open source. You have permission to republish this article under a Creative Commons license with attribution to the author and AnonHQ.com.