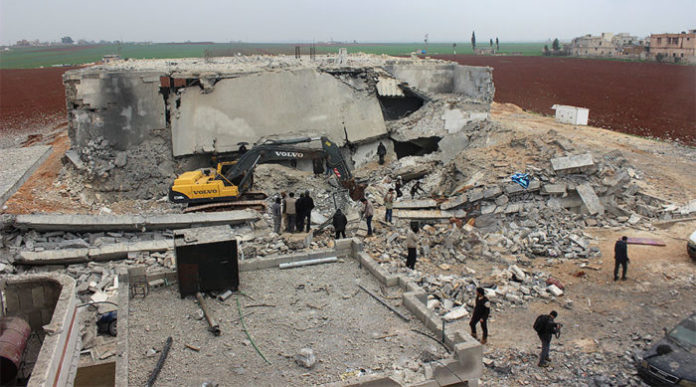 There is no doubt that the United States defense headquarters, the Pentagon, has misled Americans and the rest of the world about the country’s military operation against ISIS in Syria and Iraq.

On March 16, a U.S. drone aircraft fired missiles and dropped a 500-pound bomb on a Syrian mosque. Omar Ibn al-Khatab Mosque was used by unarmed civilians in Jinah, a village not far from the city of Aleppo. Nobody could verify the video released by the Pentagon. But we do know that the Pentagon has a department that specializes in creating fake videos and photos for propaganda purposes.

Since the strike, human rights campaigners have been working on the ground in Jinah to gather an indepth report on the strike for the first time. Three organizations – Human Rights Watch (HRW), London-based Forensic Architecture and open-source investigative unit Bellingcat – have released a comprehensive report detailing the U.S. coalition attack in Jinah.

The three organizations conducted separate but complementary investigations into the attack. Bellingcat analyzed video footage and photographs from the scene of the attack. Forensic Architecture created models of the mosque and a reconstruction of the attack, while HRW conducted the field interviews and writing of the report.

Authors of the report interviewed 14 people with first-hand knowledge of the incident, including four who were in the mosque at the time of the attack.

According to the report, the U.S. and its allies in the coalition failed to take the necessary precautions before launching the devastating strike. The report reaffirmed that the strike hit a mosque full of worshippers, not the building the Pentagon showed in the obviously faked video.

The investigators didn’t just prove in the report that the strike hit a mosque, they also provided still and motion images showing the destroyed mosque. Local residents told the investigators that the mosque is a popular one in the village, and that it hosted lectures every Thursday evening before it was hit by the drone.

On that fateful Thursday evening when the drone hit the mosque, residents revealed they had finished the Maghrib (sunset) prayer an hour prior, and were waiting for the Isha’a (night) prayer. They said about 15 minutes before the prayer; the bombs were dropped on them in the mosque.

According to the interviewees, even as they fled the attack, more missiles rained from the sky. Investigators said they suspect the missiles fired on the fleeing residents were Hellfire missiles.

“US forces failed to take the necessary precautions to minimize civilian casualties. Based on statements from US military personnel, they didn’t know this was a mosque, which reflects poorly on their intel,” Ole Solvang, the lead investigator of the report, told Al Jazeera in an interview.

“Our analysis reveals that contrary to US statements, the building targeted was a functioning, recently built mosque containing a large prayer hall, several auxiliary functions and the Imam’s residence,” Forensic Architecture said in the report.

According to HRW, four witnesses estimated there were about 300 people attending the religious lecture in the mosque when the attack happened. HRW said the actions of the U.S. coalition amounts to violation of the laws of war, which are considered war crimes by the International Criminal Court. The report also admitted, like we have reported over past weeks, there has been a surge in civilian casualties in the U.S.-led airstrikes against ISIS in Syria and Iraq.

On April 17, it was reported that U.S. coalition airstrikes killed at least 13 civilians in the eastern Syrian province of Deir Az Zor. In March, U.S.-led airstrikes in the city of Mosul in Iraq killed over 200 civilians in just a single day.

The month of March is considered by observers monitoring the situation as the deadliest month in the 32-month-long air campaign by the U.S. and its allies in Iraq and Syria.

This article (U.S. Coalition Slaughtered Unarmed Civilians in a Deadly Syrian Strike, Amounts to War Crimes [Video]) is a free and open source. You have permission to republish this article under a Creative Commons license with attribution to the author and AnonHQ.com.