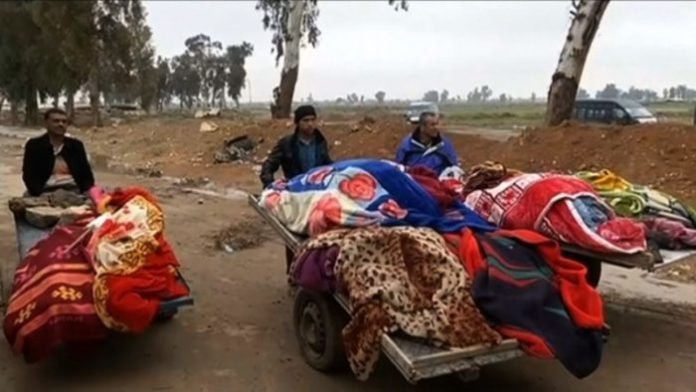 The war on terror is getting ugly and bloody. When President Donald Trump took office, he promised to deal ruthlessly with terrorists, especially members of ISIS.

This means Trump was ready to continue the known legacy of his predecessors—fighting sham terrorism. With less than 90 days in office, Trump is proving that he is willing to use all available force to achieve his objective. However, Trump’s objective does not exist. It is a fact that terrorism is manufactured by the Central Intelligence Agency (CIA) and disseminated through the mainstream media – owned by the elites – to cause fear among the public. The objective is to continue to wage a war, targeting something that does not literally exist. By doing this, they continue to consolidate their elitism. More taxpayers’ money is spent on defense. This flourishes the defense companies, which the elites are shareholders and beneficiaries of. They also get to loot resources from countries where they wage the fake war.

The war on terror is driven by greed and selfishness. Precious human lives are sacrificed for riches. This United States action equates with ritual blood money, a practice in which a ritualist demands human sacrifices so that the blood spilt engineers more money.

In the latest on the Trump-led war on terror ongoing in the Middle East, the killing of innocent civilians continues. Currently, the hands of the United States military are tainted with blood of innocent lives in Iraq, Yemen and Syria. It is appalling and despicable. The carnage perpetuated by the United States and its Western and Middle Eastern allies in these countries is unspeakable. It has emerged that over 1,000 civilians have been killed just in the month of March alone, in Syria and Iraq. Yes, over 1,000 precious lives lost in just one month in Syria and Iraq, and all caused by United States actions. The figure excludes that of Yemen. Don’t forget that the United States is supporting a Saudi-led air campaign against rebels fighting to overthrow the current government of Yemen. Civilian casualties in Yemen have also been surging.

For Syria and Iraq, the United States is up against ISIS. The city of Raqqa in Syria is the self-declared capital of ISIS. As of 2012, over 220,000 people lived in the city. All these people are living under the control of ISIS.

Although official operation to retake the city from ISIS is yet to begin, President Trump has already ordered troops into Syria without President Assad’s invitation. The troops have started to carry out drone attacks in Syria, all the while without permission from the Syrian government, and thus, threatening the national sovereignty of the country. On March 16, U.S. drone aircraft fired missiles and dropped a 500-pound bomb outside the city of Aleppo in Syria. As usual, the Pentagon said the raid targeted al-Qaeda militants, and that it killed scores of them.

But activists said the raid never hit any militants. According to activists, the bombs were dropped on civilians who had gathered at a local mosque in Jinah for a religious activity. Over 49 civilians died in the raid. This is just one example of such strikes. Many strikes have gone undetected or unreported. In these strikes, militants live while civilians die.

In Iraq, the attention is on Mosul. The United States says it is backing the Iraqi military with airstrikes to recapture the region from ISIS. Here too, the airstrikes are hitting civilians. In truth, the situation in Mosul is far worse than in Syria.

The Pentagon announced recently that the operation to retake western Mosul from ISIS has halted. The pause is as a result of airstrikes carried out by the United States-led coalition, which hit a building housing displaced people, and killing over 200 of them on March 17. According to commentators, this strike on civilians is among the deadliest of U.S. airstrikes in the Middle East since the invasion of Iraq in 2003. Those who sustained injuries from the attack are uncountable. Reports suggest airstrikes have destroyed medical facilities, allowing a pure humanitarian disaster to continue to unfold in the city.

The Iraqi Vice President, Osama al-Nujaifi, who visited the scene of the strike in Mosul said the military and the coalition led by the United States are using excessive force without priority to saving civilian lives. This is also just one of the numerous civilian killings carried out by the United States-led coalition in Iraq. Aggregating all these attacks in Syria and Iraq; we have more than 120 civilian casualty events from the United States-coalition in the month of March. These attacks have resulted in the deaths of about 1,200 civilians.

The high civilian death toll is leading many to question whether the United States military has loosened the rules of engagement that seek to limit civilian casualties. The Pentagon maintains the rules have not changed, but more civilians are dying on a daily basis.

This article (Trump Expands War Terror, Kills over 1,000 Civilians in Syria and Iraq in Just a Single Month [Video]) is a free and open source. You have permission to republish this article under a Creative Commons license with attribution to the author and AnonHQ.com.