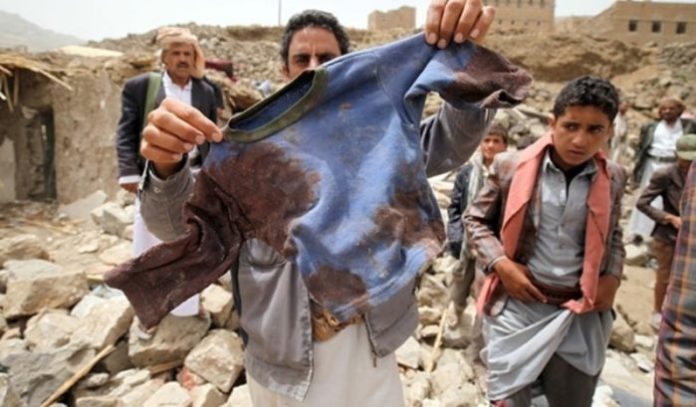 The Western mainstream media has deliberately refused to report on the current slaughtering of civilians by the United States military in the Middle East.  But we will.

Currently, the hands of the United States military are tainted with blood of innocent lives in Iraq, Yemen and Syria. In fact, it is appalling and despicable to say the least. The carnage being perpetuated by the United States and its allies in the Middle East, particularly Saudi Arabia, is unspeakable.

Just in the first quarter of 2017, the number of civilians killed by the United States and Saudi Arabia in Iraq, Yemen and Syria has passed the 1,000 mark. This is a rough estimate only, however, the actual figure could be higher. The truth about this war is that every single bullet or bomb fired by the United States forces drives dozens of people into the hands of militants. The war is not hitting terrorists as the Pentagon wants us to believe. It is the innocent civilians who are bearing the brunt of United States’ firepower. Since the United States started the war on terror in the Middle East in 2001, literally countless amounts of civilians have lost their lives in the region. On the raid in Yemen, more details have now emerged. If you thought previously that the Yemeni civilian casualties were some form of a mistaken single strike by the United States military, you are wrong. The raid was carried out by the United States Navy SEALs, the Navy’s primary special operations force and a component of the Naval Special Warfare Command.

According to a firsthand report on the raid, it was an open fight between an elite military with sophisticated weapons and vulnerable civilians with improvised weapons.

Days after the raid occurred, Kim Sharif, Director of Human Rights for Yemen, visited the village in al Bayda Governorate to assess the situation. Mr Sharif now says what he saw and heard in the village was testimony to a complete massacre of civilians.

According to Sharif, local residents told him that when the U.S. navy SEALs arrived in the village, they shot everything that moved on the ground. Targets included women and children, who of course were the highest casualties.

Local residents admitted that although some militants sporadically use their village as a meeting place, as of the time the navy SEALs arrived, no militants were present in the village. Residents categorically denied the Pentagon’s claim that their village is a headquarters for al-Qaeda in the al Bayda province.  Residents further told Sharif that when the SEALs arrived and started shooting, many in the village were confused, and because the country is at war, many residents have guns. They also opened fire, leading to many bombs and bullets being dropped on them by fighter jets.

In an interview with RT English, Mr Sharif expresses disgust about the killing of innocent civilians by the U.S. SEALs and the Saudi-led coalition in Yemen. He blames the international community for turning a blind eye at the mass killings being perpetuated by the United States and Saudi Arabia. “There is a total hypocrisy as we now known by the international community. Complete hypocrisy and it is connected with geopolitical interest in the waters of the Yemeni Southern regions, in particular the Bab-el-Mandeb passage, which is very important to the whole world, as you know. It seems this campaign to attack the Yemen and kill civilians, and according to UN reports, 60 per cent of civilians are victims of the air raids by the Saudi-led coalition. When the Navy SEALs landed in Shabwah and al Bayda a month ago they shot everything that moved: children, the victims were just women and children,” he said.

Mr Sharif reveals that as many as 800 schools have been hit by airstrikes from the Saudi-led coalition, adding that the United States has also turned Yemen into a ‘laboratory’ where all drones are tested.

“They deliberately target civilian areas. For example, 800 times schools have been hit. Why would someone hit schools? There is clearly a need to just kill as many people as possible and subjugate into having to accept a president chosen for them by the Saudi coalition, together with their masters who dictate to them what they should be doing. This business of the drone itself is a breach of the sovereignty of the state of Yemen. It isn’t allowed under international law,” says Sharif. Sharif is right. It appears the agenda of both the United States and Saudi Arabia is to kill as many people as possible in Yemen. Since the Saudi-led coalition started the air campaign in Yemen in 2015, over 10,000 civilians have so far been killed. Many others have fled their homes. Human Rights Watch has urged the UN to take all necessary measures to stop the bloodshed being committed by the United States and Saudi Arabia in the country.

This article (U.S. Navy SEALs Shot Everything, Including Women and Children during Yemen Village Raid) is a free and open source. You have permission to republish this article under a Creative Commons license with attribution to the author and AnonHQ.com.