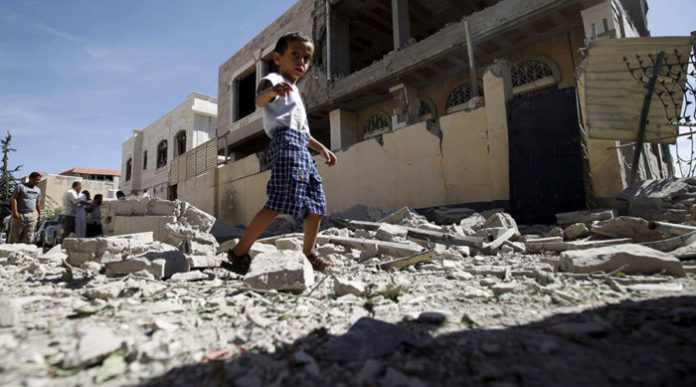 The war in Yemen – that began in 2014 – is still ravaging human lives. Houthi rebels backed by Iran are fighting to overthrow the current government led by Abd Rabbuh Mansur Hadi. President Hadi’s government has the backing of Saudi Arabia, making the war a proxy between the Shia faction in Islam—led by Iran, and the Sunni faction—led by Saudi Arabia.

In March 2015, Saudi Arabia convinced other Sunni countries in the region to form a coalition aimed at dropping bombs against the Houthis. The Houthis, too, have received arms supply and fighters from Iran. The United States is on the side of the Saudis, and has provided technical assistance to the coalition to bomb the Houthis. What is so appalling about the war is that the actual combatants are not suffering as compared to innocent civilians. Civilians are bearing the full brunt of the war. Particularly on the United States-backed Saudi-led airstrikes, many civilians have been killed, maimed and displaced because of constant bombs dropping in civilian populated areas.

In August 2016, the United Nations made the disturbing announcement that as many as 14 million people are going hungry in Yemen due to the war. Out of this figure, 370,000 children are suffering from severe acute malnutrition. The country’s population is around 24.41 million. This means more than half of the population is without food.

Human rights groups monitoring the situation in Yemen also added their voice against the Saudi-led airstrikes. According to the rights groups, many Yemenis are dying of perpetual hunger, lack of medical supplies, as well as being at risk of chemical and heavy weapons attacks. These threats are brought upon the people, directly as a result of Saudi Arabian aggression. During the time the dissents occurred against the airstrikes, the United Nations listed Saudi Arabia among those nations guilty of child rights abuse, as a result of the country’s flagrant aggression in Yemen. But surprisingly, amid the growing dissents of the Saudi-led airstrikes, the United Nations then delisted Saudi Arabia without giving any reason. The removal was done by the then Secretary-General Ban Ki-moon. According to reports, Mr Ban was forced to do so by a number of countries.

A diplomatic source then told Reuters that the United Nations had faced “bullying, threats [and] pressure,” which amounted to “real blackmail.” The source also said the decision to implicate Saudi Arabia in child rights violations was declared “anti-Muslim, which would mean no contracts of OIC [Organization of Islamic Cooperation] members, no relations, contributions, support, to any United Nations projects [or] programs.” When Saudi Arabia was removed from the list, Human Rights Watch (HRW) said the decision would allow the coalition to continue dropping bombs on civilians.

“The secretary-general’s decision flies in the face of overwhelming evidence that violations by the Saudi-led coalition have killed and maimed hundreds of children in Yemen,” children rights advocacy director at HRW Jo Becker said at the time.

In the latest, HRW has said it has overwhelming evidence that the Saudi-led airstrikes in Yemen are killing schoolchildren, as well as preventing many others from attending school. HRW also reports that in January 2017, indiscriminate air bombardments by the Saudis near missed a school in the Nihm district of the Sana’a governorate, resulting in the deaths of two students. A school administrator was also killed in the airstrike. Some adults and students were also wounded in the attack.

It is said about 900 children attend classes in the building where the bombs were dropped nearby, approximately 150 to 200 meters from the school. Many of the students were said to be in their classrooms at the time, and if the bomb had hit the school building, it would have been a complete disaster, witnesses told HRW. HRW stated that this wasn’t the first time coalition airstrikes had hit civilian populated areas, killing children and adult civilians. HRW said coalition airstrikes killed at least eight women and a child in Arhab District in February. HRW revealed many others were wounded.  Another strike carried out on a funeral reception in the village of Shiraa, near Sana’a, killed eight women and a child, HRW revealed further.

This article (Rights Group Demands U.N. Put U.S.-Backed Saudi Arabia Back on List of Child Rights Abusers in Yemen) is a free and open source. You have permission to republish this article under a Creative Commons license with attribution to the author and AnonHQ.com.