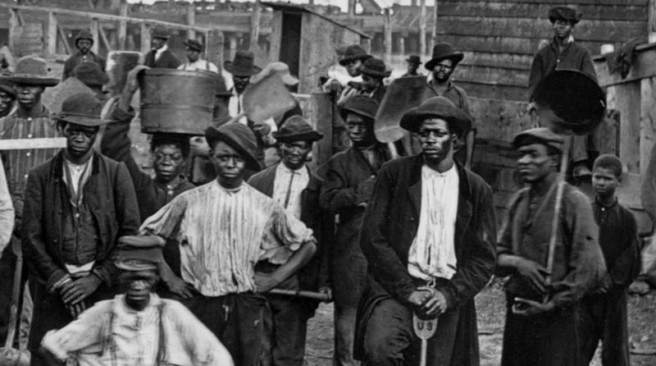 There’s a forgotten, dark American history akin to the concentration camps of Nazi Germany. Devil’s Punchbowl in Natchez, Mississippi, is a centerpiece to disputed Civil War historical accounts of thousands upon thousands of freed slaves corralled and held behind walls constructed by disgruntled Union Army officers.

The brutal if not hellish landscape was Mother Nature’s own prison – a hollow, bowl-shaped gorge walled off by cliffs thick with trees. Paula Westbrook, an expert on the history of the area described the influx of freed slaves from plantations into the area, swelling the local population from 10,000 to upwards of 120,000 overnight.

Still unable to stomach such an outcome, embittered soldiers set about walling the newly freed people into treacherous humid conditions, refusing to let them out. Women and children were left to linger without food and water, dying slow deaths, while the men were forced into a new slave labour of clearing the surrounding thicket.

“So they decided to build an encampment for ’em at Devil’s Punchbowl which they walled off and wouldn’t let ’em out,” Don Estes, the former director of the Natchez City Cemetery and local historian explained on a report by News Channel 12.

Today, the area is impenetrable, difficult to navigate and infested with snakes and crocodiles. Skeletal remains are occasionally uncovered along the area where the Mississippi River runs after flooding, but the remains are difficult to date due to the unforgiving environmental factors, reports News Channel 12.

The concentration camp in Punchbowl was one of many in the time after the Civil War, and were more commonly known as ‘contraband camps’ because the freed slaves were again commodities, this time for the Union troops benefit, and often located near Union camps.

The forgotten history is still open to contentious debate because of the lack of record keeping at the time. Starvation and disease were rampant amongst those held captive, and upwards of one million ‘freed’ slaves died in these camps.

“Disease broke out among ’em, smallpox being the main one,” Estes said of the concentration camp prisoners in Punchbowl. “And thousands and thousands died. They were begging to get out. ‘Turn me loose and I’ll go home back to the plantation! Anywhere but there.’ But they wouldn’t let them out.”

The assault against the slaves in Punchbowl didn’t end with their deaths. Refusing to allow the men to bury their dead, they were handed shovels and told to “bury ‘em where they drop,” says Westbrook.

It’s estimated that in Natchez alone, in one year, over 20,000 freed slaves were killed in Punchbowl’s concentration camp, marking a very dark moment in American history that some would sooner forget. Downplayed, the shame and inhumanity of slaves dying from conditions their ‘freedom’ led them to because of disgruntled officers, is often forgotten or argued, assisting in what locals consider a collective memory loss. Published in 1863, an account is given by locals in Natchez. “…the strong Union sentiment that prevails. One half the inhabitants at least, are loyal to the old Government. The most wealthy planters and the largest slaveholders are the most stubborn Union men. They opposed secession from the beginning, and many of them, though losers to the amount of half a million dollars by the hands of the rebels, and, if you count the loss of their slaves, it would treble this amount…” The old report confirms that at the time of publishing, that “Six thousand runaway negroes are collected in the contraband camp at Natchez.”

Eerily, locals speak about the sweeping wild peach groves now growing in the gorge, rich with fruit. However, no one dares to pick up the fallen fruit to eat it, knowing the dark history located beneath the grove’s grounds and the mass graves that fertilize them.

This article (The American Concentration Camp that Most Prefer to Ignore) is a free and open source. You have permission to republish this article under a Creative Commons license with attribution to the author AnonWatcher and AnonHQ.com.