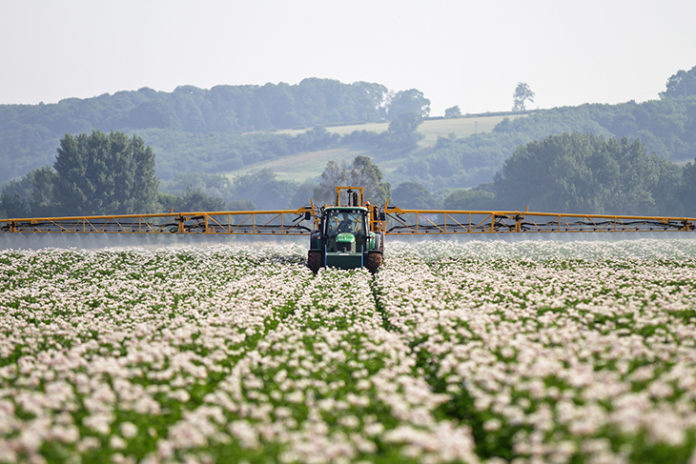 As Monsanto seeks to recover from its falling sales, its new herbicide – Dicamba – is being sprayed before its been officially approved for use and has already caused extensive damage.

With global sales of its best-selling herbicide falling by 34% in the last year alone, Monsanto teamed up with Dupont Chemical to make a new pesticide, Dicamba, to try to boost its herbicide sales. Dicamba, which is still awaiting EPA approval, is so important for Monsanto, and its likely new owner Bayer, as it will help to combat weed resistance to RoundUp, which was once Monsanto’s best-selling product.

Weed resistance to RoundUp is becoming a major problem as farms that have used it for years are finding that its effectiveness is decreasing as weeds are becoming more resilient and more problematic than ever. If Dicamba is approved, it could very well prevent a full-scale agricultural crisis of “super weeds” from developing on US farms that have become dependent on GM seeds and their associated agrochemicals.

However, despite the fact that Dicamba is currently illegal to use, it has already destroyed thousands of acres of non-GM crops. Farmers can be fined up to $1,000 for spraying it, but the legal penalties have done little to deter some farmers from using it prematurely as Dicamba-resistant GM crops are already on the market. A problem commonly reported with Dicamba use is its ability to drift to neighboring fields. Though the problem can be minimized by improving application methods, the volatility of the gas (its tendency to quickly move from a liquid to gaseous state) is a major problem and any amount of wind can send the herbicide traveling large distances to neighboring fields. As Dicamba is extremely toxic to all plant life, (as well as pollinating insects) any crop that is not genetically engineered to resist it suffers immediately upon exposure, putting many non-GM crops in harm’s way.

The damage done is already extensive. Missouri has suffered crop damage on more than 40,000 acres with a total of 125 farmer complaints filed. Numerous other states, including Illinois, Kentucky, Texas, North Carolina, Mississippi, and Arkansas have also been the victims of extensive crop damage caused by Dicamba drift. Even the EPA has admitted that the reports of crop damage due to illegal Dicamba spraying are out of control.

Victims of illegal Dicamba spraying are also having a difficult time trying to get other farmers or Monsanto to help pay for the damages. Monsanto has a well-known and nasty habit for criminalizing victims of GM seed and chemical drift by suing the victims and often seizing their land in the process. Monsanto, in doing so, has never lost a single court case. In one case, farmer Steve Marsh sued his neighbor, Michael Baxter, over the contamination of his organic farm in Australia due to GM contamination caused by the drift effect. He ultimately lost, likely due to the fact that Monsanto heavily backed Baxter’s legal defense team.

Will Monsanto ever be held accountable for letting its illegal herbicide be sold before its official approval, despite all the damage it is causing? The sad reality is that it is extremely unlikely since the government has shown that it lets Monsanto do whatever it wants.

This article (Illegal Spraying of Monsanto-Dupont Pesticide Causes Massive Crop Damage in Multiple States) is free and open source. You have permission to republish this article under a Creative Commons license with attribution to the author and TrueActivist.com