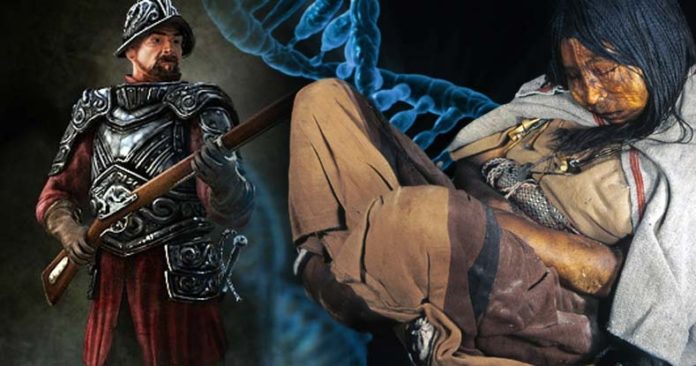 The story of the Americas has been deliberately distorted by Europeans who invaded the land. For example, we were told in school that a man named Christopher Columbus discovered the Americas. However, common sense will tell us that when Columbus and his criminal gangs saw the land, people (Native Americans) were already living there. Where then is the discovery? Or are Europeans the only people on earth?

Moving away from this bunch of lies we have been force-fed, in this article, we are focusing on a fact that the mainstream media has refused to acknowledge. Something significant has happened: the atrocities committed by Europeans against Native Americans have been exposed. Take note, that it is not only Native Americans who have suffered the past of European brutalities. Anywhere on this earth, where the Europeans have set foot in history, greediness and selfishness motivate them to commit despicable acts against owners of the land. A first genetic study, conducted on the peopling of the Americas, has revealed that European colonization wiped out Native American populations to extinction. The University of Adelaide’s Australian Centre for Ancient DNA, analyzed the DNA of pre-Columbian mummies and skeletons to reconstruct a genetic history. The researchers found that there is a “striking absence” of those genetic lineages in modern Native Americans and the mummies analyzed, pointing to an extinction event that coincides with the Europeans arrival in the Americas.

In fact, when Europeans came into contact with the natives of the Americas, it was a literal disaster. Europeans plundered their continent. In the years before Columbus arrived in the Americas, Europe was in a mess. There were rampant wars, poverty, diseases and famine. Therefore, when news spread in Europe that a new land has been found elsewhere, Kings and Queens on the continent gathered their forces to claim their take of the land.

Even criminals on death row were freed and made part of the crew to conquer the so-called New World. For example, in 1523, the Spanish conquistador, Francisco Pizarro led an expedition that conquered the Inca Empire. The Inca Empire was the largest empire in pre-Columbian America. The administrative, political and military center of the empire was located in Cusco, modern day Peru. The Inca civilization arose from the highlands of Peru, spreading to large portions of western South America, centering on the Andean mountain ranges.

Pizarro captured and killed the Incan Emperor, Atahualpa, claiming the lands in the area for Spain. The king of Spain at the time, Charles V, told Pizarro to convert all the natives of the land into Christianity. Anybody who refused was put to the sword, including Emperor Atahualpa.

According to the account of the story, Atahualpa had been selected as the new leader of the empire. Pizarro, who had arrived in the area from Spain with his gang, invited Atahualpa to a feast in honor of the new emperor’s rise to the throne. At the feast, Pizarro tried to convince Atahualpa and his people to convert to Christianity, and accept Charles V as their King. When Atahualpa refused, Pizarro ordered his men to open fire, whereupon they slaughtered 5,000 Incan soldiers in an hour. Pizarro kept Atahualpa alive long enough to get a ransom of gold and silver, and then, even after Atahualpa converted to Christianity under duress, he was later killed.

The Spanish account of this horrific act of killing innocent people is full of eulogies to Pizarro and his criminal gang.

These tales of barbarity are a common theme of European conquest all over the Americas. There are also documented accounts of torture and mass murder carried out by Columbus and his men while in the Caribbean islands.

There was another culprit in the death of Native Americans. Europeans, being from densely populated cities, were vectors of chronic diseases such as influenza, bubonic plague, smallpox and measles. Indigenous Americans, on the other hand, had become genetically isolated over their thousands of years of migration from the Beringian land bridge to the farther reaches of South America. A vast number of Native American deaths were the result of diseases that were completely new to their populations. “Surprisingly, none of the genetic lineages we found in almost 100 ancient humans were present, or showed evidence of descendants, in today’s Indigenous populations. This separation appears to have been established as early as 9000 years ago and was completely unexpected, so we examined many demographic scenarios to try and explain the pattern. The only scenario that fit our observations was that shortly after the initial colonization, populations were established that subsequently stayed geographically isolated from one another, and that a major portion of these populations later became extinct following European contact. This closely matches the historical reports of a major demographic collapse immediately after the Spaniards arrived in the late 1400s,” joint lead author, Dr Bastien Llamas said on the study.

This article (Horrific: First Ever DNA Study Reveals Europeans Pushed Entire Lineages of Native Americans to Extinction) is a free and open source. You have permission to republish this article under a Creative Commons license with attribution to the author and AnonHQ.com.