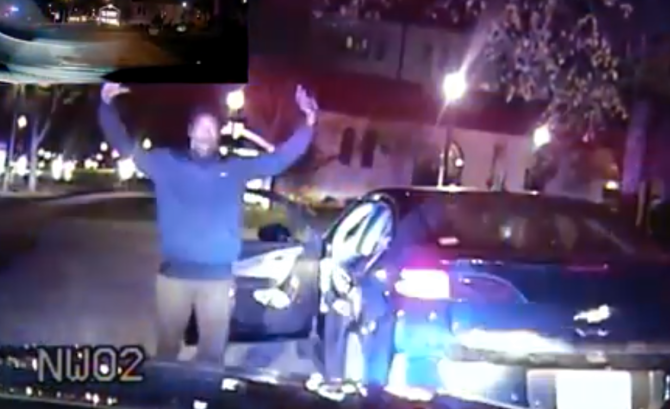 The Evanston Illinois Police Department is the latest department to be in hot water, after a dash cam video was released showing a black man beat up and arrested for stealing his own car. The incident occurred on Oct. 10, 2015. Lawrence Crosby was fixing his car and took it for a drive, when out of nowhere, a swarm of cops surrounded him, tackled him and arrested him for resisting arrest. They had received a 911 call that Crosby was stealing a vehicle, only the vehicle turned out to be his.

Within ten seconds of exiting his car, Crosby was tackled to the ground by no less than five officers. He was compliant, obeying commands, yet before he had a chance to “get on the ground” as was commanded, he was violently kneed in the abdomen and pulled in a half dozen different directions by the over-zealous cops, just waiting to beat somebody down. Crosby was an engineering student working on his doctoral degree when the incident occurred. He was driving towards campus when he was stopped without justification.

“I’m cooperating …sir, you’re on video…that’s an FYI,” Crosby can be heard on the video. Crosby was recording the incident from his own dash cam. Fortunately, the Evanston PD had a camera rolling of their own. They did not release the video voluntarily; Crosby’s lawyers had to petition for its release. Despite the overtly brutal actions committed against a cooperative man accused of no crime, the department initially stood by their officers, claiming that their actions were justified under the circumstances. Funny how they never make any attempt to justify their own justifications. The video clearly showed a compliant suspect who did not deserve the beating he received.

The actions of the officers were violations of long standing directives and procedures, yet the internal affairs division of the agency clearly forgot to check the basic police manual when coming to their conclusion. Crosby’s criminal case was thrown out upon the judge viewing the video. Crosby has since filed a federal civil rights violation lawsuit for unlawful arrest and excessive force.

The one person who seems to escape the conversation is the blatantly racist 911 caller, who began this cascade of horrific events. The obviously white female caller took it upon herself to call the police because a black man was working on his car. She even stated to dispatch “I don’t know if I’m racial profiling. I feel bad.” If anyone should feel bad, it should be her. Her name has been withheld from the papers and doesn’t appear to be named in Crosby’s civil rights violation lawsuit. The racist chain of events began with the caller, who needs to be held as accountable as the police are for their actions.

To make things worse, one of the officer’s words were transcribed from the tape. The officer told Crosby, “I said, I didn’t shoot you, (expletive). You should feel lucky for that.” Another officer was heard saying, “He’s going to play a (expletive) game with us. We’ve got him on camera. We gave him orders. He wouldn’t comply. You know, he’s got a ton of police cars around and he thinks he’s going to do whatever the (expletive) he wants.” Obviously, the reverse-engineering of the situation began almost immediately.

Department spokesman Joseph Dugan stated the actions on of the officers were justified. “He immediately gets out of the car, he puts his hands up, the officers go in and he moves so they swarm him, get on him, get him down on the ground.” Dugan’s job is apparently to justify every wrong departmental move by simply stating it was right. “He was not injured, no bruises, his face was fine. The use of force was justified.” Dugan is a liar paid by other liars to defend an indefensible perspective.

The original 911 caller thought it would be a good idea to remain on scene during Crosby’s arrest. When she found out it was his car, she asked the police to apologize for her. “I’ve been in Evanston for so long and I, like, know what’s suspicious. It looked suspicious, so I didn’t want anybody’s car to get stolen.”

This article (Illinois Cops Tackle and Arrest Man for Stealing His Own Car) is a free and open source. You have permission to republish this article under a Creative Commons license with attribution to the author and AnonHQ.com.