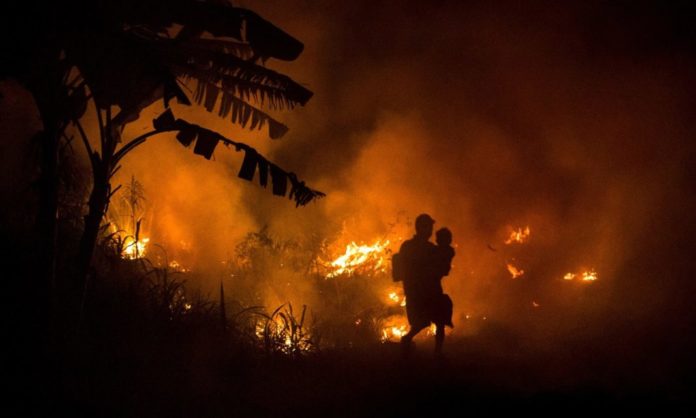 In what is said to be one of the greatest environmental disasters of the 21st century, vast parts of Indonesia are currently on fire, burning from forest fires due to a whole range of sub-standard environmental policies.

Due to deforestation, the land is sparse, as canals have dried up and the rain forest is set on fire to be cleared for the building of plantations. Palm oil is one of the main reasons for the clearing of the rain forests.

The media has not reported anything to represent the scale of what is going on. The fires are currently producing and in three weeks the fires have released more CO2 than the annual emissions of Germany.

The fires are an even greater tragedy as they are occurring in a part of the world that is already fragile and has lost so many species of endangered animals already, the future looks bleak for the orangutans, tigers and rhinos that once called the lush green rain forest their home, which has now been replaced by a fiery inferno.

The pollution coming from the emissions is causing devastation in the human population too. The residents are given face masks to wear but they provide nominal help as the air is so thick with acrid black smog. The politicians are even forced to wear masks in parliament. As well as the forests being burnt to the ground, in huge areas the whole of the ground in smouldering on fire. Lots of the earth is made of peat, which burns for weeks, sometimes months when it catches fire. Dangerous gasses such as methane, carbon monoxide, ozone and exotic gases such as ammonium cyanide are released into the air for the public to have no choice but to breathe in.

Indonesian president Joko Widodo is in a tough position. He knows just how dangerous the deforestation process is, but years of corruption and fractious relationships between the state and the people mean that the business carries on as usual.

While the media have their own bizarre agenda and have chosen not to report this story in the mainstream, it seems like there is nothing to be done to stop this horrific process. But we can make an impact by decreasing the need for palm oil in general in the world, by choosing to boycott companies who use it in their products. Starbucks, PepsiCo, Kraft Heinz and Unilever are all known for using palm oil, companies you should choose not to give your money to if you care about the devastation it is causing in Indonesia right now.

If you enjoyed this article or learned something new, please don’t forget to share it with others so they have a chance to enjoy this free information. This article is open source and free to reblog or use if you give a direct link back to the original article URL.