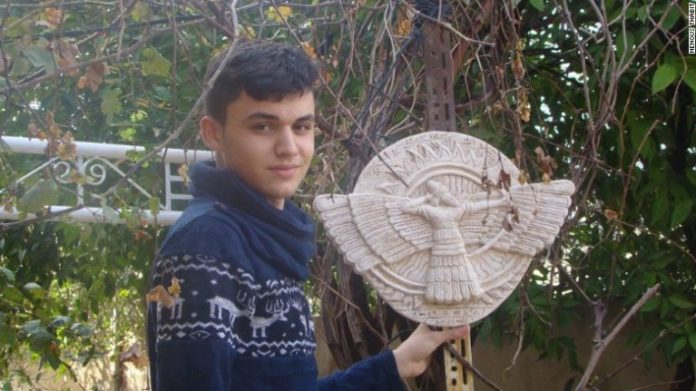 17-year-old Nenous Thabit is fighting against ISIS by recreating sculptures that were destroyed when the Islamic extremist group bulldozed Nimrud.

It was a sobering day when footage was released of Daesh entering the city of Nimrud and destroying centuries-old artifacts. Reportedly, the group of Islamic extremists were on a mission to destroy any symbols they consider to be idolatrous and, in result, begin using sledgehammers and electric drills on works of art.

Rather than become overwhelmed by the sad news, 17-year-old Nenous Thabit decided instead to fight back by recreating some of the sculptures that were destroyed. The Assyrian Christian considers many artifacts in the city – which is 3,000 years old and was once the capital of an Assyrian empire – to be the work of his ancestors.

To honor them and to become empowered himself, he began creating immaculate sculptures that resemble some of the most precious Assyrian artifacts in Nimrud and in other ancient areas near and in Mosul. He told CNN:

“They waged a war on art and culture, so I decided to fight them with art.”

In the photo below, Thabit can be seen in the modest home where he lives with his family. He is meticulously carving the beard of Lamassu, an Assyrian deity. It took about fifteen days to complete the piece. He says:

“Lamassu is my favorite statue. It is the strongest creature in the Assyrian heritage. It has the head of a human, the body of a lion, the legs of an ox and the wings of a vulture.”

By announcing his work, Thabit is placing himself and his family in real danger. He told CNN over the phone:

“In Iraq, there are people who are killed because they are sculptors; because they are artists. ISIS view them as apostate. So continuing to sculpt is a message that we will not be intimidated by those devils.”

Despite this, the young activist hasn’t slowed down in his mission. In the past year alone, he has sculpted 18 Assyrian statues and one mural. The artist was trained by his father, Thabit Michael, who is a sculptor himself. From the age of seven, Nenous visited his father’s workshop and began to play with clay. According to his father teaching his son did not require a lot of effort. Michael said:

“Nenous is an incredibly fast learner. I see huge potentials in him”.

Until ISIS began destroying artifacts in Nimrud, sculpting was just a hobby for Thabit. But after his heritage was attacked, he started to take the craft very seriously. Next year, he hopes to attend attend art school in the Kurdish city of Dohuk.

“My dream is to become a prominent artist in Iraq to make my country proud and show the world that we in Iraq love life and cherish our heritage.”

This article (This Teen Is Re-Creating Sculptures That Were Destroyed By ISIS) is free and open source. You have permission to republish this article under a Creative Commons license with attribution to the author and TrueActivist.com