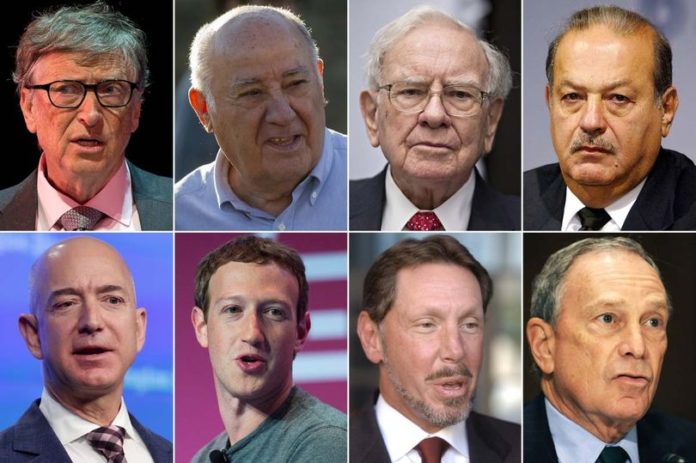 How does wealth and income inequality really look? In 2015, the richest 1% owned 48% of all global wealth. In 2016, just 62 individuals owned as much wealth as half of the world’s population. In 2017, the wealth gap is wider than ever: 8 multi-billionaires on the planet — which includes 6 Americans — own more than the combined wealth of half the world’s population.

In a report “An Economy for the 99%,” which calls for a crackdown on tax dodging and a shift away from super-charged shareholder capitalism that pays out disproportionately to the rich, Oxfam warned the gap between the rich and the poor is far greater than had been feared.

An analysis by Oxfam, which described the gap as “obscene,” found the 8 super rich men have a combined fortune of $426 billion; by contrast, the 3.6 billion, who make up the poorest half of humanity, have a combined wealth of $409 billion.

According to the Forbes Billionaires list, here are the world’s 8 richest people, which Oxfam says own half the world’s wealth:

“This year’s snapshot of inequality is clearer, more accurate and more shocking than ever before. It is beyond grotesque that a group of men who could easily fit in a single golf buggy own more than the poorest half of humanity.

“While one in nine people on the planet will go to bed hungry tonight a small handful of billionaires have so much wealth they would need several lifetimes to spend it. The fact that a super-rich elite are able to prosper at the expense of the rest of us at home and overseas shows how warped our economy has become.

“Inequality is not only keeping millions of people trapped in poverty, it is fracturing our societies and poisoning our politics. It’s just not right that top executives take home massive bonuses while workers’ wages are stagnating or that multinationals and millionaires dodge taxes while public services are being cut.”

Bloomberg reports Bill Gates, the world’s richest man, has donated more than $30 billion to the Bill and Melinda Gates Foundation, which so far has given away $35 billion in grants to fight hunger, disease and poverty.

While Gates exemplifies how outsized wealth can be recycled to help the poor, Oxfam believes, such “big philanthropy” does not address the fundamental problem.  Max Lawson, Oxfam’s head of policy, remarked:

“We see a lot of hand-wringing – and clearly Trump’s victory and Brexit gives that new impetus this year – but there is a lack of concrete alternatives to business as usual. There are different ways of running capitalism that could be much, much more beneficial to the majority of people.”

“If billionaires choose to give their money away then that is a good thing. But inequality matters and you cannot have a system where billionaires are systematically paying lower rates of tax than their secretary or cleaner.”

“Across the world, corporations are relentlessly squeezing down the costs of labour – and ensuring that workers and producers in their supply chains get less and less of the economic pie. This increases inequality and suppresses demand.

“Corporations maximize profit in part by paying as little tax as possible. They do this by using tax havens or by making countries compete to provide tax breaks, exemptions and lower rates.  Corporate tax rates are falling all over the world, and this – together with widespread tax dodging – ensures that many corporations are paying minimal tax. Every dollar of profit given to the shareholders of corporations is a dollar that could have been spent paying producers or workers more, paying more tax, or investing in infrastructure or innovation.

“Crony capitalism benefits the rich, the people who own and run these corporations, at the expense of the common good and of poverty reduction. It means that smaller businesses struggle to compete and ordinary people end up paying more for goods and services as they face cartels and monopoly power of corporations and those with close connections with government.“

This article (Inequality Gets Obscene: 8 Men Own Half the World’s Wealth) is a free and open source. You have permission to republish this article under a Creative Commons license with attribution to the author and AnonHQ.com.