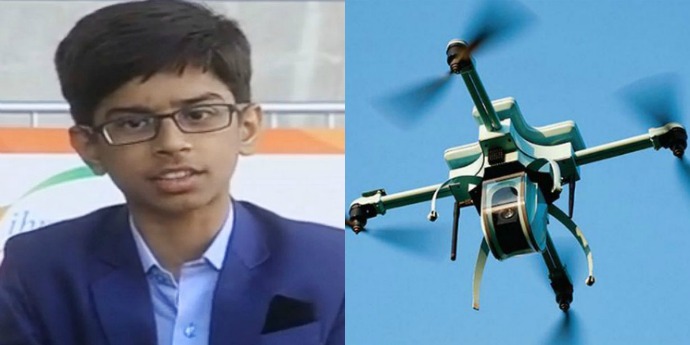 Harshwardhan Zala, a tenth-grader from the western Indian state of Gujarat, has signed a deal worth INR 50 million ($730,000) with the Department of Science and Technology, and the Government of Gujarat, to commercially produce his breakthrough invention of an anti-landmine drone. The drone can detect and defuse explosive devices hidden under the surface of the ground in battle fields.

Zala, the robotics developer and founder of Aerobotics told The Times of India at the recently concluded Vibrant Gujarat Global Summit:

“Wired to locate and destroy, the drone has been equipped with infrared, RGB sensor and thermal meter along with a 21-megapixel camera with a mechanical shutter that can take high resolution pictures as well. The drone is designed to send out waves that cover eight square meter area while flying two feet above the surface; the waves detect land mines and communicate their location with a base station. The drone also carries a bomb weighing 50 gram that can be used to destroy the landmine.”

Class 10 student Harshwardhan Zala made 3 prototypes of the drone,he has registered for a patent and has set up his own company ‘Aerobotics’ pic.twitter.com/Bm8nmi88hy

The school boy began work on the prototype last year, after learning about the huge number of soldiers who succumb to injuries sustained due to landmine blasts caused by manually defusing the explosive devices. His parents funded the first two prototypes, which cost around INR 200,000. The state government then financed the third and final version, which cost around INR 300,000.

Zala, who has already registered for a patent, believes his anti-landmine drones would be cheaper than the present system used in the army.

“I first created a land mine detecting robot but realized that since the weight is heavy it would trigger a blast and damage it so I thought of creating a drone which will be at a safe distance while detecting the mines.”

According to the 2016 Landmine Monitor report, which covers the implementation of the Mine Ban Treaty, 6,461 people were killed or injured by land mines and explosive remnants of war in 2015, a 75% increase from 2014 (3,695) and the highest reported casualty total since 2006 (6,573). The report said civilians (mostly in Afghanistan, Libya, Yemen, Syria and Ukraine) accounted for 78% of casualties, of which 38% were children.

“The decade-high number of new casualties caused by landmines and unexploded ordnance, and the continued suffering of civilians, more than a third of whom were children, proves again that these indiscriminate weapons should never be used by anyone,” Loren Persi of the International Campaign to Ban Landmines’ Landmine Monitor, said in a statement.

More than 50 countries manufactured land mines before the 1999 Mine Ban Treaty, a number that has since dwindled to 11. The Landmine Monitor report claimed the most active producers were India, Myanmar, Pakistan and South Korea.

This article (Teen Invents Anti-Landmine Drones, Strikes Deal Worth $730,000) is a free and open source. You have permission to republish this article under a Creative Commons license with attribution to the author and AnonHQ.com.