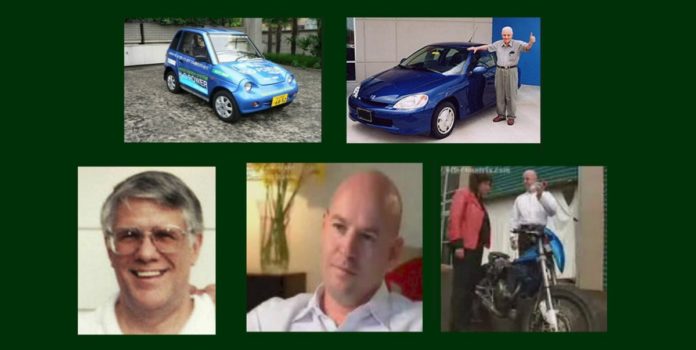 With all the talk and rhetoric these days, about global climate change, it is worthy to mention the works of some alternative scientists in the automobile industry.

Of course, we all know that the so-called scientific community is being controlled by a hidden interest. The purpose of this article is to let you know that there are scientists who have invented car engines that run completely on water. If these scientists had received the necessary support, probably today, we wouldn’t be wasting time and resources talking about the reduction of air pollution and combating climate change. Nonetheless, because of greed and selfishness, the few who control us saw these inventions as a threat to their industry, and therefore used clandestine methods of elimination, or see these distinguished scientists halt some of their best work, stopping their inventions from thriving. Water-powered cars are a threat to the oil industry, which threatens the petrodollar and thus, US foreign policy – particularly in the Middle East; and that is why these scientists were either killed or silenced in order to suppress their inventions.

Herman Anderson was born in the state of Tennessee, United States, in 1918. Herman had an illustrious career as a scientist at the American National Aeronautics and Space Administration (NASA). At NASA, Herman reportedly tested hydrogen powered rockets. After sometime with NASA, he resigned, using the knowledge he had acquired to create a water-powered vehicle – which he believed would transform the world. He created a water-powered Chevy Cavalier. Herman was allowed to drive this car, but was banned from selling or manufacturing them. The reason given, however, for the banning of the manufacturing and sale of the water-powered car, was that it produced too much radiation. Can you believe that? Isn’t it completely absurd and ridiculous? We all know that all cars produce various amounts of radiation.

Unfortunately for the world, Herman gave up his work. He died in 2004, departing with a knowledge that would have indeed changed the world for the better. The video below talks more about him.

And then there was Stanley Meyer…

Stanley Meyer (1940-1998), also became famous for inventing a water-powered car.  Born in the United States, Meyer created the ‘water fuel cell’. In fact, Meyer theorized that any car fitted with his cell, could run purely on water.  The Pentagon even expressed interest in his work, and plans were being made to honor him for his amazing invention. A local television station later filmed Meyer driving a dune buggy powered by the water-engine. When Meyer received media attention, the then British Advanced Energy Institute (BAEI) sent a delegation to study his work. The BAEI confirmed then: “We recently sent a delegation to witness Stan’s work, to really evaluate it. This is one of the most important inventions of the century.” Meanwhile, as all these things are being done to convince Meyer that his work had been accepted, unbeknownst to him, the same people were plotting his downfall. To put it bluntly, in 1998, Stanley was murdered in cold blood. Meyer and his brother Stephen had met two men claiming to be Belgians. The men said they were investors and wanted to invest in the work of Meyer. Meyer thought it was a good idea, and had a drink with them. Moments after the men left the restaurant, Meyer reportedly grabbed his neck and ran outside. He was sick.

Stephen later spoke of the last words of his brother: “I ran outside and asked him, ‘What’s wrong?’ He said, ‘They poisoned me.’ That was his dying declaration.” He also revealed that a week after Meyer’s death, federal officials came to his property and confiscated both his car and research equipment. That ended Meyer’s ‘most important’  invention of the century. His knowledge has long since decayed with his body.

Steve Ryan, an inventor from New Zealand also devised a method of using water as fuel. Apart from this, he also developed a proprietary catalyst, which enables water to mix with waste oil to provide fuel. When Ryan received media attention, the so-called Environmental Protection Agency of the United States announced that it is testing the mixture invented by Ryan. In 2005, Ryan demonstrated his water-powered motorbike in a video.

The footage showed Ryan fueling the bike with just water and then driving it 50mph along a highway. Ryan established his company, BiosFuel, planning to sell motorbikes powered with water. All of a sudden, the promising company went dead. The company later issued a statement saying: “Due to political and economical reasons, we are unable to sell the motorcycles.” To end the article, it will be unfair if we fail to tell you a little about Tom Ogle. Ogle did not invent a water-powered engine. However, what he invented was close to eliminating oil in engines, especially in cars. Ogle invented a black box he called a ‘filter.’ The filter replaced carburetor and fuel pumps in the engine. The result was amazing. The filter allowed the car to travel up to 100 miles per a single gallon of fuel.

Just like the others, Ogle’s invention received considerable media coverage. Just as he was on the verge of rising, Ogle started having all sort of problems. First, his wife divorced him. Then, on April 14, 1981, he was shot by an unidentified person. He survived the bullet wounds, but it caused him huge damage. The person who shot him, was also never arrested. Devastated of his quick fall from grace to grass, Ogle took to drinking, becoming an alcoholic. On August 19, 1981, Ogle reportedly collapsed and died at his friend’s apartment.  That was the end of Ogle – and the end of his game-changing invention. You can read an article of somebody who had a one-on-one encounter with the genius, Ogle, by clicking here.

We don’t need to write further. Watch the videos, and read the links provided. After that, make your own judgment. This is a crazy world. This is a dark world. But don’t give up. As we keep educating ourselves collectively, one day, we can rise up together!

This article was sourced partly from Henrymakow.com.

This article (Inventors who Invented Water-Powered Cars, but were Killed or Forced to end their Work [Videos]) is a free and open source. You have permission to republish this article under a Creative Commons license with attribution to the author and AnonHQ.com