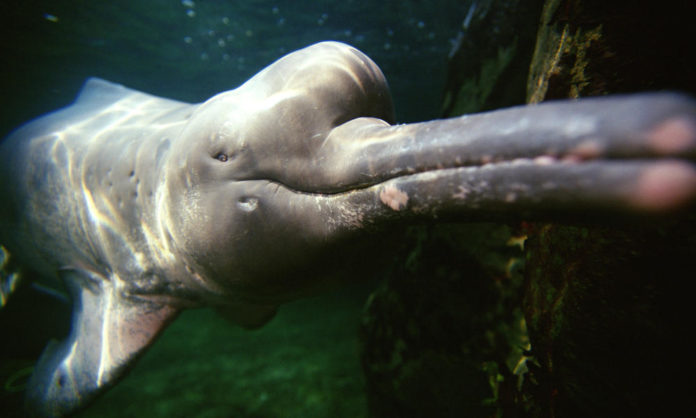 Our species, like all living mammals on this planet – are dependent on sources of fresh water for our personal consumption and various forms of agriculture, including food, wool, linen and fiber for cotton. While rain water can sustain some small farms, the world’s rivers sustain a large percentage of our agricultural crops.

However, despite their importance to our very survival, centuries of exploitation and neglect have depleted and damaged our rivers to a near unsustainable level. As a result, the biodiversity of these unique ecosystems is at great risk, threatening the future of many incredible species of fish, mammals, amphibians and plants.

Around 50 percent of species across  our land, rivers and seas have been lost in the last 40-years as a result of habitat loss and unsustainable hunting, according to a WWF analysis. In actuality, this percentage is believed to be higher, as many of the Earth’s species have still yet to be discovered by science. However, using the available data, experts estimate the rapid loss of species is between 1,000 and 10,000 times higher than the natural extinction rate, which could be devastating to our future existence on this planet.

Today, human activity – primarily agricultural runoff, pollution and invasive species –  threatens the rivers that serve 80 percent of the world’s population, and endanger the biodiversity of 65 percent of the world’s river inhabitants, according to Rivers in Crisis. Although many of us think of fresh water as an unlimited resource, easily accessible by turning a faucet, the reality of the matter is actually the opposite.

As the human population rapidly increases, it is likely that our fresh water practices deplete and pollute our sources beyond the point of no return. Unfortunately, across the world, many countries, communities and species are suffering as a result, as agriculture and industry place increasing demands on our limited fresh water supply.

In order to grasp an understanding of the effects human activity has on river wildlife vitality, we will be exploring the cases of individual fresh water – and fresh water dependent – species affected by the introduction of alien species, habitat loss and unsustainable trade in the final installment of our Anthropocene series.

Infrastructure, a physical structure or facility needed for the operation of a society or enterprise, has had a devastating effect on many of the world’s ecosystems. The world’s rivers, in particular, have suffered a loss of healthy flows and biodiversity due to the increasing number of infrastructure projects across the globe. The Gila River, for example, has been devastated by the large number of dams and diversions constructed over the last 100 years.

The Gila River, which stretches nearly 600 miles across Arizona, flowing west from the New Mexico border until it reaches the Colorado River, is home to two species of endangered fish, the spikedace and loach minnow.  According to reports, these two species of endangered fish have rapidly declined since the 1980s as a result of reduced water flows and climate change.

The great number of dams and diversions that have been constructed on various locations along the river, have severely reduced or eliminated our once healthy flows in many reaches of it. Reduced water flow can have a number of adverse effects on the river’s ecosystem. For example, lower flows result in both higher water temperatures and changes in water quality.

“The Gila’s a snowmelt-driven system, and both of these species use spring runoff as something of an environmental cue to initiate spawning,” says Propst. “With warming, timing of spring runoff will shift.”

“These fish adapted to incredible variability in the system, and environmental variability,” he says. “But if you have a shift of the whole suite of environmental drivers they evolved with, they can’t survive.”

Unfortunately, the spikedace and loach minnow are not the only species to have suffered from infrastructure related effects. The yellow-billed cuckoo, a threatened species, is protected under the Endangered Species Act (ESA) and the Southwestern Willow Flycatcher is currently listed as endangered.

A new diversion is scheduled to be built in New Mexico; to supply water to four counties in the state, Luna, Hidalgo, Catron, and Grant counties. In response to this decision, a Southwestern New Mexico town has announced that it does not want any involvement in the proposed Gila River diversion. Silvertown, Grant County’s largest town, has instead invested in water conservation projects in an effort to show state officials that conservation efforts are more cost effective.

Invasive species, or alien species, are living organisms that are not native to the ecosystem under consideration, and whose introduction causes harm to the species or environmental elements native to that ecosystem.

Inadvertently or deliberately, humans have introduced alien species to different regions and continents since we first began navigating around our environment. However, with the development of transportation methods, the number of cases has risen dramatically.

The introduction of crayfish in waterways across the UK, is one of the most recent examples of the consequences of the introduction of alien species. The UK government introduced the signal crayfish, an American species, to British waterways in 1976. Since the species was introduced, it has spread to a number of rivers in the UK, endangering populations of native species and causing environmental damage.

These eating machines – the signal crayfish will eat fish, frogs, invertebrates, plants and even individuals of its own species – have become widespread in the UK, carrying a disease that is endangering the native white-clawed crayfish.

According to Oliver Brown, the Natural Resources Wales’ (NRW) fish culture officer, parts of the country have lost between 50%-98% of their population of white-clawed crayfish. In an effort to save the white-clawed crayfish from extinction in Wales, an innovative project at Cynrig Hatchery aims to re-introduce the endangered species back to Welsh waterways. Since 2009, the project has seen approximately 4,000 of the threatened crustaceans reared and released back into their native environment.

The overfishing issue is often reported on in the media, however, the vast majority of these articles focus on marine species and the effects this practice has on our oceans. For many communities around the world, freshwater fish are often the most accessible food resource, putting pressure on many populations of freshwater species. The European eel, for example, is under threat, primarily due to overfishing practices driven by an increase in demand.

In addition to overfishing, the population of European eels has plummeted in recent years due to a combination of human activities including climate change, habitat loss, barriers to migration, parasites and pollution. Since the 1970s, populations of the European eel have declined by approximately 90%-98%. Today, the species is listed as Critically Endangered on the IUCN Red List.

According to the IUCN Freshwater Fish Specialist Group, overfishing is the primary factor driving the European eel into extinction. The drop in the population is a serious cause for concern and has been since 1990, “when the catch of fry for export to China began to increase,” reports the website.

Efforts that aim to save the species from extinction primarily include conservation projects. The Zoological Society of London (ZSL), for example, has been working to conserve these iconic London inhabitants as part of their Tidal Thames Conservation Project since 2005. Over the last 25-30 years, the European eel has declined by up to 95% in some tributaries of the Thames.

As part of their project, the ZSL is monitoring the upstream migration of the European eel in the Thames and its tributaries, in an effort to understand their unique life-cycle and the pressures on their population. The project also monitors eel movement in marshlands, and works closely with the Environmental Agency to develop and deliver the eel management plan for the Thames region.

In addition, the ZSL is also one of the key organizations involved in the Sustainable Eel Group (SEG). The group, which is made up of scientists, conservationists, policymakers and commercial sectors, have recently been working to highlight the importance of cross-sector collaborations to manage the stocks’ sustainably.

This article (The Devastating Effects of Human Activity on Freshwater Wildlife Populations) is a free and open source. You have permission to republish this article under a Creative Commons license with attribution to the author and AnonHQ.com.