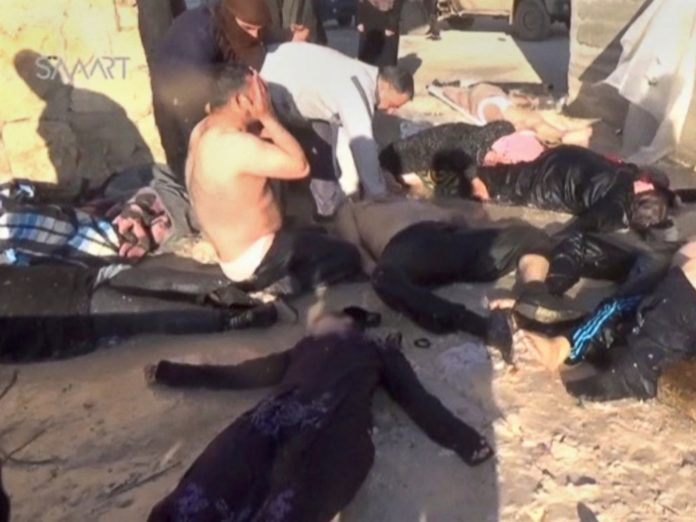 Nearly everyone aside from those living under a rock are aware of the United States’ recent airstrike against Syria. The airstrike was reportedly commenced in retaliation of a chemical attack launched by Syrian forces, and this is the general narrative the mainstream media has been repeating, but is it the truth?

A report from Veterans Today was brought to our attention, in which it was stated that Donald Trump ordered the Swedish Medical Association to be censored after they claimed White Helmets are murdering children to produce fake chemical attack videos in Syria. Most of this narrative is false, and we’ll elaborate further in a moment, however after investigating the issue, it would appear there’s a shred of truth to it.

To understand the situation in full, one must first understand what is actually happening in Syria right now. And of course, it has more to do with the fossil fuel industry and money than it does humanitarian efforts:

The White Helmets (said to be Al-Qaeda affiliated) are a volunteer group of individuals who act as a rescue team in rebel-controlled areas of Syria. It should be noted that though they claim to be an impartial, non-government organization, they are viewed by many to be a propaganda tool for the US and the UK. In fact, while the White Helmets say they are independent and accept no money from governments, the US has openly admitted to providing the organization with more than $20 million in monetary aid:

Veterans Today has been accused of spreading fake news in the past, and is said to be deeply anti-Israel, making them a questionable source due to their bias on particular topics. This is especially true of their senior editor, Gordon Duff, who happens to be the author of the report in question.

Duff’s main argument is based on the account that “Swedish Doctors for Human Rights had cited the ‘White Helmets’ as child killers,” a claim they deny. Swedish Doctors for Human Rights (SWEDHR) is an “independent, non-profit, non-partisan, non-governmental organization engaged in the research and reporting on the effects of war-crimes, torture and human-rights transgressions on civil populations or on individuals.”

Provided below is the main video focused on in Duff’s report (recorded in March), meant to provide “proof” the White Helmets have been killing children. We’ve included this video only because it is relevant to the issue. Warning, it contains graphic images that may not be suitable for all viewers:

Although SWEDHR reviewed the video directly above and provided an original statement on it, they claim Duff misrepresented them in his report. After first clarifying that SWEDHR is not a “Swedish medical association,” the group went on to elaborate that they had never concluded the White Helmets were murdering children. They did, however, state that the White Helmet’s videos were of faked medical procedures conducted on children who were already dead, which is what makes this story relevant:

“Lifesaving procedures on the children showed in the White Helmets videos were found to be fake, and ultimately performed on dead children. The syringe used in the ‘intracardial injection’ performed on the male infant was empty, or its fluid was never injected into the child. This same child showed, briefly, discrete life-signs (uncertain in my judgement) in the first segment of WH Vid-1. If so, this child might have died during the lapse in which the ‘lifesaving’ manoeuvers showed in the White Helmets movie went on. (Which is not the same than affirming that the personnel seen in the videos caused the death of the infant. In forensic terms, the actual cause of death, as well as the mode and the issue of intent, refer to different items than those treated in our analysis).”

This directly excludes the claim that SWEDHR stated White Helmets are killing children, but as we can see, that doesn’t mean the White Helmet videos aren’t propaganda. As for whether or not Trump is trying to censor the Swedish Medical Association due to SWEDHR’s statement on the White Helmets; considering SWEDHR is not a part of the Swedish Medical Association, this scenario is unlikely, however it is slightly curious that Wikipedia is now considering whether or not to delete their page:

The most important fact to take away from this story, is that SWEDHR has found the White Helmet videos to be fake. Considering the White Helmets are likely a propaganda tool for the US and the UK (both nations use the White Helmet’s testimonies and footage as evidence), this would insinuate that the chemical attack by Syrian forces was faked to justify the US’s airstrike on Syria – a move that’s been played before in the recent past.

The most important fact to take away from this story, is that SWEDHR has found the White Helmet videos to be fake.

In related news: Deleted Daily Mail Online Article: “US Backed Plan for Chemical Weapon Attack in Syria to Be Blamed on Assad”

It should also be noted that the White House claims Syrian forces used sarin gas in this recent chemical attack. Severe exposure to sarin gas (which is the whole point of a chemical attack) causes loss of consciousness, paralysis, convulsions and respiratory failure, all of which can lead to death. Less severe exposure can cause the victim’s bowels and bladder to immediately release, as well as vomiting, eye irritation and trouble breathing – it’s important to wear the proper safety gear, even when handling the victims.

Reports have brought to attention images that show the White Helmets handling corpses – only a few hours after the attack – with little to no safety gear. Other civilians can be seen standing next to corpses with no safety gear at all. Paul Antonopoulos of AMN states:

“… White Helmets are handling the corpses of people without sufficient safety gear, most particularly with the masks mostly used, as well as no gloves. Although this may seem insignificant, understanding the nature of sarin gas that the opposition claim was used, only opens questions.”

Antonopoulos brings to attention various other discrepancies in the official story, such as the fact the location of the images suggests they were taken at a White Helmets base, as well as the fact that the Syrian Army and its allies are in a comfortable position in Syria – it would make no sense for them to conduct a chemical attack at this time. Antonopoulos is correct that the official version of events raises more questions than answers them, first and foremost: if these civilians didn’t die from a chemical attack, what killed them? If they did, was it Assad, or was it staged?

Despite all evidence which points to the contrary, the US and its allies will continue to push their narrative of events, and the mainstream media will continue to regurgitate this narrative with impunity. In reality, the world is witnessing – first hand – a coup in action. The only difference between this coup and many other coups the US has conducted in the past, is that the government has gotten sloppy and doesn’t care anymore that everyone knows they’re corrupt. They are, in fact, trying to normalize it.

This article (White Helmets Help Fake Chemical Attacks in Syria for US Interests) is a free and open source. You have permission to republish this article under a Creative Commons license with attribution to the author and AnonHQ.com.