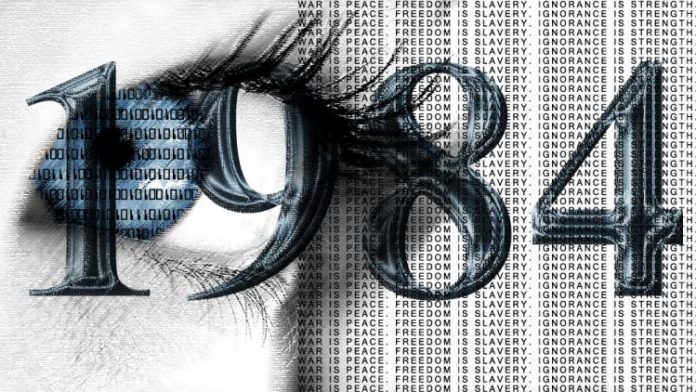 The “black art of political newspeak” was used to describe a Republican Party consultant in the early 2000s. Big Brother surveillance laws were unveiled around the same time by Snowden. The thought police became real only a few years ago, in China, as the government conjured ways to mimic The Minority Report’s premise; and doublethink is no longer a conjured word from one author’s imagination.

George Orwell’s book – 1984 – is widely accepted, not as the biggest seller of all time but the most influential. Time and again his pages have been quoted by many a journalist, author and script writer. And for good reason: Life has imitated art.

1984 was a satire on Stalinism for the most part – Big Brother’s black-moustachio’d appearance; all powerful, and the Trotsky figure that leads to a split in the Party are all there – but ironically, today, it is capitalism and democracy that have embraced its underbelly with open arms.

The brilliant piece about communism has turned on itself in real life. It is no longer a popular piece of entertainment but a functional handbook, it seems, for the life ahead of us in western society.

But it is for the Ministry of Truth and its ‘newspeak and ‘doublethink’ that, since Trump’s inauguration, has become blatant. With no attempts to conceal anything but the facts, the official language of 1984’s Oceania is threatening to break against our shores in tsunami-like torment.

The Ministry of Truth is described as:

“It was an enormous pyramidal structure of glittering white concrete … three hundred metres into the air. From where Winston stood it was just possible to read, picked out on its white face in elegant lettering, the three slogans of the Party:

WAR IS PEACE
FREEDOM IS SLAVERY
IGNORANCE IS STRENGTH”

Winston Smith, the protagonist explains to the reader doublethink and The Ministry of Truth:

“To know and not to know, to be conscious of complete truthfulness while telling carefully constructed lies, to hold simultaneously two opinions which cancelled out, knowing them to be contradictory and believing in both of them; to use logic against logic, to repudiate morality while laying claim to it, to believe that democracy was impossible and that the Party was the guardian of democracy; to forget whatever it was necessary to forget, then to draw it back into memory again at the moment when it was needed: and above all, to apply the same process to the process itself.”

“That was the ultimate subtlety: consciously to induce unconsciousness, and then, once again, to become unconscious of the act of hypnosis you had just performed. Even to understand the word ‘doublethink’ involved the use of doublethink.”

But what does this have to do with Trump?

Is “Let’s make America great again” in Trump’s context, doublethink? Can we really have a great America at the demise of minority groups (LGBT, Muslims, Civil Rights groups as one example) and/or the international community? A greater America with stronger military and police with larger, more overbearing sweeping powers? Trump’s doublethink on choosing political advisors? (…But this isn’t to say Obama or the Democrats are less guilty.)

The White House removed its climate change web page. And the healthcare, civil rights and LGBT sections. Just thought you should know.

Is the Ministry of Truth working overtime to erase the fact that Trump’s inauguration had a lesser turnout than Obama’s? Even though photos accompanying the claim clearly show the truth; it’s a slippery slope. A minor concession of pride for Trump, but something so small in significance leads to much larger truths concealed. History, near and far, large and small, serves as a reminder of humanity’s pitfalls; we have no privileges to rewrite their facts. The fake news vs. real news; corporate media vs. independent media…these are all signs of a bigger picture.

Democrat vs. Republican? Have you really fallen for that old line?

What happens to us when The Ministry of Love is constructed? What then?

This article (Is Trump’s Vision Dangerously Orwellian?) is a free and open source. You have permission to republish this article under a Creative Commons license with attribution to the author AnonWatcher and AnonHQ.com.