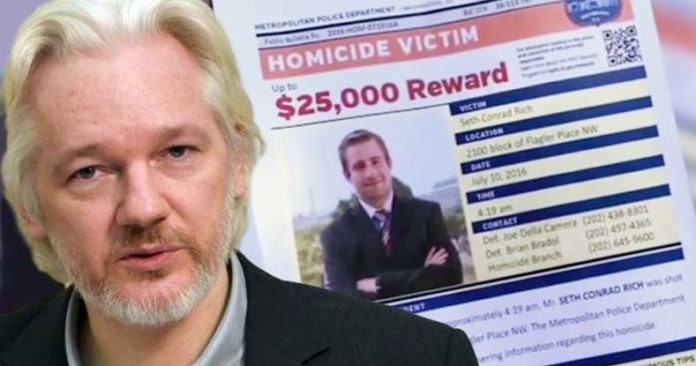 By James Holbrooks at undergroundreporter.com

Denmark — After much speculation, Wikileaks founder Julian Assange may have just confirmed that murdered Democratic staffer Seth Rich was, in fact, the source behind the DNC email leak.

In an interview with Dutch television program Nieuwsuur, Assange said Wikileaks whistleblowers “go to significant efforts to get us material” at “often very significant risks.” As an example, he cites the details of Rich’s killing:

“As a 27-year-old, that works for the DNC, who was shot in the back, murdered, just two weeks ago, for unknown reasons as he was walking down the street in Washington. So…”

“That was just a robbery, I believe,” the reporter interjects. “Wasn’t it?

“No,” Assange responds. “There’s no finding.”

Assange attempts to move the conversation forward, but the reporter immediately brings it back to the topic Assange himself raised.

“What are you suggesting?” he asked pointedly.

Assange starts to talk more about the risks his sources take, but the reporter cuts him off with the question: “But was he one of your sources, then?”

“We don’t comment on who our sources are,” Assange responds.

“But why make the suggestion,” asks the reporter, “about a young guy being shot in the streets of Washington?”

Assange answers by reiterating the dangers faced by Wikileaks sources, then goes on to mention Seth Rich by name. He further states that the murder of Rich is a “concerning situation” and that “a variety of Wikileaks sources are concerned when that kind of thing happens.”

As Claire Bernish recently highlighted for Underground Reporter, the so-called “Clinton body count” has spiked in recent weeks. Since the end of June, four Clinton-connected people have died under questionable circumstances — one of whom, John Ashe, was a former president of the U.N. General Assembly.

Ashe, incidentally — whose throat was crushed in an alleged workout accident — was set to testify against Hillary Clinton in a corruption case just days later.

Coincidentally — or, perhaps not — Seth Rich was also slated to testify in a Clinton investigation. According to the Washington Post, prior to his death Rich was looking into several instances of DNC electoral fraud and voter suppression, and was to give testimony in the case regarding Clinton’s email server — the very scandal kicked off by the Wikileaks data dump.

Interestingly, the Assange interview on Nieuwsuur took place the same day Wikileaks offered a $20,000 reward for information leading to the conviction of Seth Rich’s killer.

While Assange didn’t say outright the young staffer was, indeed, the source behind the DNC leak, the fact that he brought up Rich’s killing at all — not to mention his own subsequent words that, seemingly, confirmed the connection — strongly suggests that Seth Rich was the catalyst in Hillary Clinton’s email scandal. And if true, it would certainly fall in line with other shadowy events surrounding the presidential hopeful.


This article (Julian Assange Just Implied Murdered DNC Staffer Seth Rich Was Wikileaks Source) is free and open source. You have permission to republish this article under a Creative Commons license with attribution to James Holbrooksand UndergroundReporter.org. If you spot a typo, please email the error and the name of the article to [email protected]. Image credit: YouTube/Nieuwsuur