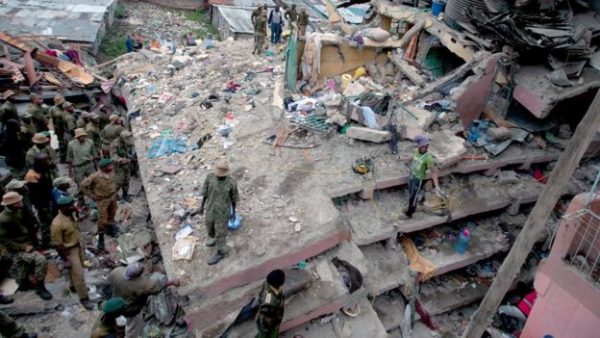 A collapsed building in the Kenyan capital Nairobi has killed at least 12 people—and injured many others—after a torrential rainfall in the city.

The seven-storey building collapsed on Friday in the poorly-settled district of Huruma, northeast of Nairobi. Local reporters say houses in the area are poorly arranged on the narrow streets.

According to city authorities, the building housed about 164 one-room apartments. It is unclear how many people were in the apartments when the building came down.

So far, rescue officials have pulled more than 128 people from the debris. However, many are still believed to be trapped under the wreckage. The sad scene of the collapsed building was overwhelmed with cheers and applause, when rescue officials pulled two toddlers from the rubble. They were immediately rushed to a waiting ambulance to receive medical care at a nearby hospital. Rescue officials told reporters that they can still hear voices under the debris, and that there is hope that more people will be saved.

“It’s heartbreaking … amongst the rubble you’ve got mattresses strewn around, children’s shoes, pots and pans, photo albums. Every time we move some rubble and we hear voices, it gives the multiagencies that are here the morale to keep on fighting so that we can get as many people — as many survivors as possible,” said Arnolda Shiundu, a spokeswoman for the Kenyan Red Cross.

The BBC’s correspondent in Kenya, Emmanuel Igunza, reports that the building took three months to construct. According to city authorities, there will be an investigation into whether the building had a certificate allowing people to live there. It is said authorities have tried to pull the building down in the past. The building was constructed two years ago.

“The building went down during the heavy rains, but we still want to establish if all the procedures were followed when it was constructed,” Nairobi’s deputy governor, Jonathan Mueke, told reporters at the scene. Poor building standards are very common in Kenya and many other African countries. A survey carried out last year in Kenya, found that more than half the buildings in the capital were unfit for human habitation.

The high demand for housing in Nairobi, and many other African cities, has led to some property developers bypassing building regulations to reduce costs and increase profits.

Last year, the president of Kenya, Uhuru Kenyatta, ordered an audit of all the buildings in the country after a spate of collapses.

Mr Kenyatta visited the scene of the current incident on Saturday morning. He again asked the country’s disaster authorities to survey other houses in the area to determine if any were likely to collapse, and to move residents out to avert a similar loss. He also ordered that the owners of any unstable structures be arrested and put before a court immediately. It has been raining for the past few days in Nairobi. The rainfall has reportedly caused landslides, washing away houses and flooding roads. Police have said 19 people have now died from the rain, including those in the collapsed building. Four people reportedly died when a wall toppled over, and three were swept away by flood waters. Kenya’s biggest selling newspaper, the Daily Nation, reports that the collapsed building was probably caused by the torrential rainfall that has hit the city. But city authorities said an official investigation has been launched to determine what caused the disaster.

This article (Kenya Building Collapse: 12 Confirmed Dead, Many Still Trapped Under Debris) is a free and open source. You have permission to republish this article under a Creative Commons license with attribution to the author and AnonHQ.com