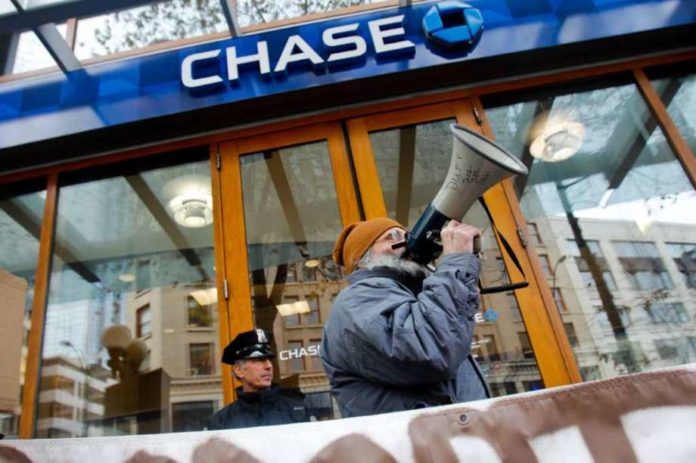 SEATTLE – Arrests have been made at multiple bank locations, including JPMorgan Chase, as protesters continue to demonstrate against the Keystone XL oil pipeline. Twenty-six people were handcuffed and arrested after the peaceful protests called on banks to cease doing business with TransCanada.

TransCanada is the company pushing for the oil Keystone XL and Dakota Access (DAPL) pipelines. Since Trump’s arrival at the White House, executive orders were signed to speed up the pipeline projects, claiming they serve the country’s national interests. The executive orders contained clauses to help expedite permit request approvals.

AnonHQ reported in 2014 the risks of environmental impact – particularly in Nebraska – that came with the XL pipeline extension. Sand Hills, the largest wetland ecosystem in the US, and “declared a national monument in 1984” is home to over 300 species. The risk of tar sands – the dirtiest fossil fuel to exist – leeching into the area raised concerns, and despite its impact, the pipeline was pushed through for approval. As for the well documented fight against DAPL, where protesters suffered an unleashing of security dogs, water cannons in freezing temperatures, and were literally numbered as they were placed into holding cages for detainment, the fight still continues for some. For what seemed a slither of hope when the DOJ called for a halt to the construction of DAPL, it was only short lived.

The fact that President Trump is an investor in the DAPL project was largely underreported by the mainstream media – Associated Press aside. His holdings in Energy Transfer Partners (ETP), the pipeline’s parent company, and Phillipps 66 – another company who has a quarter share in Dakota Access –– stood at a reported $300,000 combined. And although Washington Post did report Trump as “dumping” his ETP shares, it couldn’t be confirmed if he held shares in other energy companies. The value of his shares was also disputed as between $300,000 upward to $1 million.

Officers have made arrests at multiple bank branch locations following a series of demonstrations today. More info as it becomes available.

The climate activists stood in front of several JPMorgan Chase banks in Seattle, with some standing at teller windows informing customers that the bank was closed for business. Others chanted and sang outside the banks at the multiple locations, blocking entrances or refusing to leave. The official Seattle.gov webpage announced that those arrested were largely from the “banks in the East, North and West Precincts.”  The webpage goes on to say the protesters “wanted to be arrested” and were “then taken into custody for trespassing, pedestrian interference, or obstruction based on the circumstances and will be booked into the King County Jail.”

Associated Press attempted to obtain comment from Chase spokeswoman Darcy Donahoe-Wilmot via email, but she did not respond. However, the Seattle Police Department twitter feed did confirm arrests had been made following the largely peaceful demonstrations.

This article (Keystone XL Peaceful Protesters Arrested Outside Seattle JPMorgan Banks) is a free and open source. You have permission to republish this article under a Creative Commons license with attribution to the author AnonWatcher and AnonHQ.com.