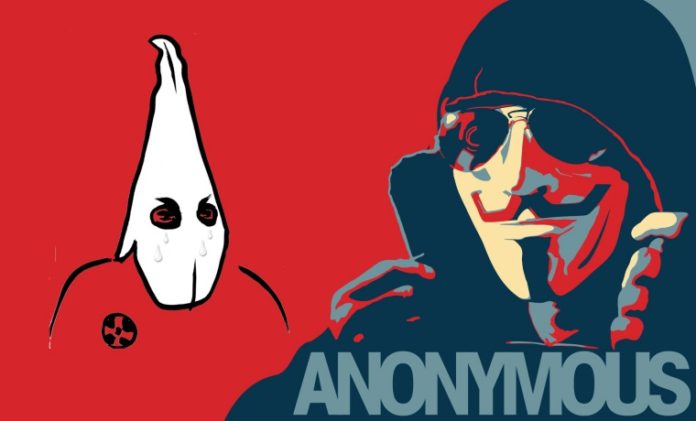 Heard of Conover Kennard? She is a former model known for criticizing the Ku Klux Klan in the US and Canada for their hate speech against black and other minorities. For her opinion, she has often been targeted on social media; however, this time Anonymous hactivists stood in defense of her when a member of the KKK named Thomas Klan started harassing her on Twitter.

#LOL, serves the #KKK right. When you #hate you deserve someone messing with you. #HumanRights#EqualityForAllhttp://t.co/zhpBWm7pnV — Kristen Tripp (@KristenCTripp) October 18, 2015

Kennard’s friend , an Anonymous member, started a massive DDoS attack and shut down KKK and its affiliated white pride websites. The targeted websites were related to Westboro Baptist Church and Traditionalist American Knights of the KKK, who threatened the hacktivists collective after the murder of Michael Brown last year.

@Anomaly100 @klan_thomas Mr thomas why the ALL POWERFUL klan can not keep it up unless its your cousins? pic.twitter.com/Mr6tFSeU9L — Amped Attacks (@sgtbilko420) October 17, 2015

KKK and all RACIST i have a question.. how does it feel knowing one man is taking you all down one by one? — Amped Attacks (@sgtbilko420) October 21, 2015

In November 2014, anonymous published credit card numbers and other personal information belonging to Frank Ancona, the self-described Imperial Wizard of the Missouri-based Traditionalist American Knights of the Ku Klux Klan, amidst a grudge between the groups fueled by protests in Ferguson. During the Ferguson riots in Saint Louis, Anonymous attacked and took down numerous KKK websites because of the group’s support for the US police forces (and subsequent criticism of the black population).

This Article (KKK Torments Woman On Twitter, Anonymous Brings Their Websites Down) is free and open source. You have permission to republish this article under a Creative Commons license with attribution to the author and AnonHQ.com.