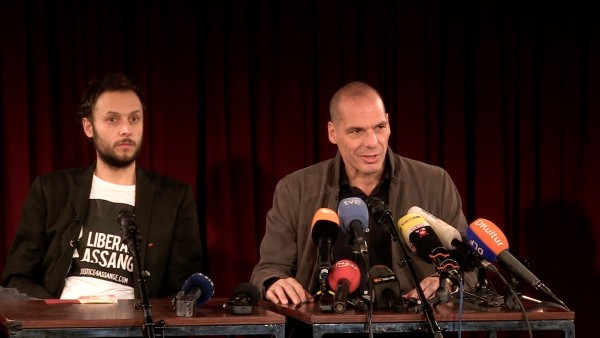 Europe prides itself as a free continent. From the classical Greek city of Athens in the 6th century B.C.E to this 21st Century, the continent has been a central figure in spreading the ideas espoused by this form of governance.

However, over the years, some concerned observers in the continent have become convinced that the fundamental principles underlining democratic governance, are now under the dictate of the few in society.

These concerned observers have turned themselves into activists. They believe Europe, which is considered to be the official birthplace of democracy, is now being ruled by a few hidden people.

Activists are therefore of the opinion, this disturbing development is threatening the survival of the continent. Recently, activists have taken the usual mouth-criticisms to another level. They have formed a new movement aimed at regaining the lost hope of Europe. The movement is attracting more and more people each passing day, and it is growing.

On February 9, 2016, the former Greek Finance Minister Yanis Varoufakis, and the Croatian author and political activist, Srecko Horvat, launched the Democracy in Europe Movement 2025 (DiEM25) at Volksbühne in the German capital, Berlin. The Greek government-debt crisis, which started in late 2009, has badly affected the country. The crisis became worse in 2015, forcing the country into a bailout referendum. Although Mr Varoufakis resigned due to the crisis, he has since become very critical of the European Economic System. Varoufakis believes his country’s debt crisis is as a result of bad policies by some ‘untouchable’ people within the European Union (EU).

According to the manifesto of DiEM25, the movement wants to bring about a fully democratic, functional Europe by 2025. This will serve as an alternative to a common bureaucracy and a common currency, which is not in any way, he claims, helping the European population.

The movement admits that the European Union has been an exceptional achievement, bringing together in peace, European people speaking different languages who are submersed in different cultures, proving that it was possible to create a shared framework of human rights across a continent that was, not long ago, home to murderous chauvinism, racism and barbarity.

However, today the movement believes that the Union has become full of myopic politicians, economically naive officials and financially incompetent ‘experts’ who submit slavishly to the edicts of financial and industrial conglomerates. The opinion suggests alienating Europeans and stirring up a dangerous anti-European backlash.

Activists in the movement believe that if they don’t act now to save Europe, the union will collapse, triggering untold hardship everywhere; not just in Europe.

The manifesto also proposes a Constitutional Assembly empowered to decide on a future democratic constitution that will replace all existing European Treaties within a decade.

One of such treaties, which activists have criticized, is the current Transatlantic Trade and Investment Partnership (TTIP). The TTIP is a deal aimed at cutting tariffs and regulatory barriers to trade between the United States and EU countries, making it easier for companies on both sides of the Atlantic to access each other’s markets. Mr Varoufakis and other members of the DiEM25 say, because the EU Council is not accountable to anyone, it acts anyhow, putting the Union in a great risk. “The body that makes the decisions is not answerable to anyone. No one can fire the European Union Council,” Varoufakis was quoted as saying during the launch of DiEM25.

Currently, more than 17, 000 people from 56 different countries have joined DiEM25. Notable among them include: Wikileaks’ founder Julian Assange, musician Brian Eno, and philosopher Slavoj Žižek. DiEM25 says people from other continents are free to join the movement, as free Europe means free world.

This article (Liberating Europe: Varoufakis and Horvat Launche Movement to ‘Free’ Europe from Control of the Few [Video]) is a free and open source. You have permission to republish this article under a Creative Commons license with attribution to the author and AnonHQ.com