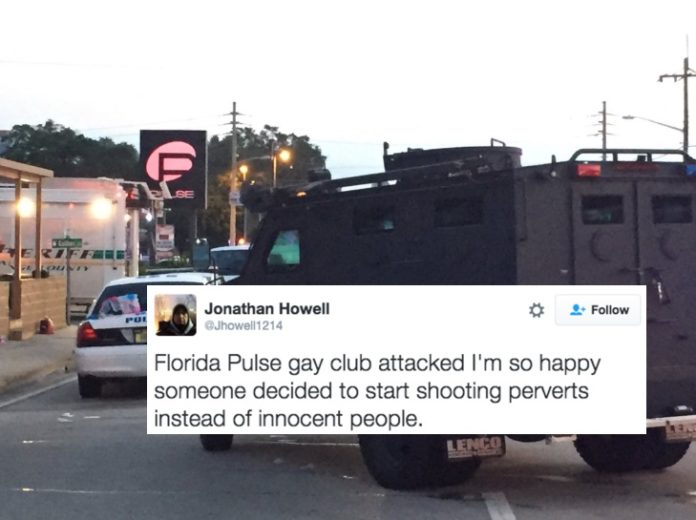 Jacob Geers of Thought Catalog has compiled a list of individuals who’ve publicly applauded the massacre in Orlando due to the sexual orientation of the victims. Provided below are a few of these individual’s posts, all of which are perfect displays of homophobia, and as such we’ve decided to take a closer look into homophobia itself. Stay tuned for some lulz.

Homophobia is defined by the Merriam-Webster Dictionary as: Irrational fear, aversion to, or discrimination against homosexuality or homosexuals. All too often when the topic of homosexuality arises, the main focus of the subject is homosexuality itself, rather than the people who seem to have the serious problem with it, e.g. homophobes.

Homosexuals, bisexuals, and everyone else who is completely comfortable with where they stand on the vastly shaded rainbow that is human sexuality, has no problems with who they are. The problem lies with those who disagree with how they choose to live their lives, therefore, those who have the problem should be the topic of discussion, not the individuals they victimize.

Here is one of the few cases where the needlessly controversial issue of homosexuality might make you smile:

According to the National Institutes of Health, a study was conducted in 1996 to investigate “the role of homosexual arousal in exclusively heterosexual men who admitted negative affect toward homosexual individuals.” The participants were split into two groups; the homophobic men (n = 35), and the non-homophobic men (n = 29), and then shown sexually explicit videos containing heterosexuals, male homosexuals, and lesbians, while the changes in their penile circumference were monitored.

The results of the study were surprising. And hilarious. Both groups experienced increased arousal when watching the heterosexual and lesbian videos, however “only the homophobic men showed an increase in penile erection to male homosexual stimuli.” The study concluded, “Homophobia is apparently associated with homosexual arousal that the homophobic individual is either unaware of or denies.”

Now then, with this information in mind, let’s all sit back and enjoy the show as these individuals make complete asses of themselves (click here for Thought Catalog’s full list): This Article (Here Is a List of People Applauding the Orlando Massacre) is a free and open source. You have permission to republish this article under a Creative Commons license with attribution to the author and AnonHQ.com.