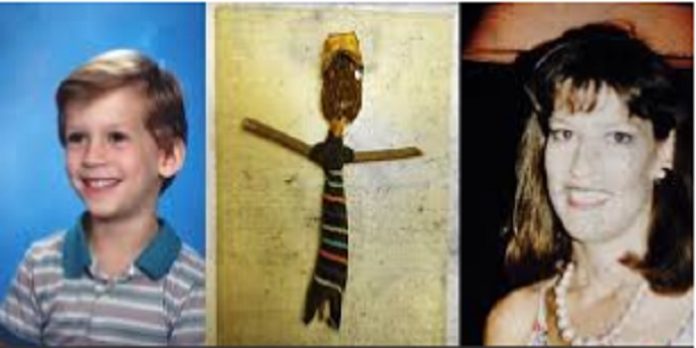 Tulpa: Thought form; a creation of another through the use of persistent imagination; mental companion; imaginary friend; hallucination; evil.

The world is a strange place, and one that isn’t fully understood. From the things that we can barely grasp, to the unimaginable that we’re more inclined to mock, the life that we live is full of nasty surprises. And so, Olivia Mabel found this out for herself.

Olivia Mabel was a grief-stricken mother after she had lost her only child, Aiden Mabel, aged 7. In 1990, the drowning death of the bright-eyed young boy on their acreage left her heart shattered, and a year later, her marriage in ruin. Four years later, tragedy struck the mother again.

After the death of her son, and after her husband left her due to her deep depression, Olivia shut herself away from the world, remaining on the Footlights Ranch property where Aiden had been found dead in a seasonal pond. Her deep grief and self-blame, and with no other family members to give her support, saw Olivia forget the outside world as it forgot her. She was last seen alive in September 1991.

On February 27, 1994, several “silent” 911 calls are received by police, all coming from Olivia Mabel’s house. What has been alluding the police now for more than 20 years, is that the phone calls were made long after Olivia’s death, and the caller has never been identified. Upon arrival, police were shocked to find a neglected house not touched in years, and the body of Olivia Mabel in her late son’s bedroom. Inside the bedroom, they found a starkly contrasting cleanliness to the rest of the house, but also something unseen in a small town such as Celina, Texas. A crudely constructed altar sat to one wall of the bedroom, with written words in the Tibetan and Sanskrit languages. Translated, they read “Construct” or “To Build.” And in front of the alter sat Olivia Mabel’s rotting corpse, clutching a stick doll of her late son, hand crafted and dressed in cloth from Aiden’s clothing. The investigation into Olivia’s death was eventually closed, with no answers given, remaining unsolved.

There is a strong belief amongst those spiritual – specifically in Tibetan Buddhism – that Tulpa does exist. Where it deviates with some, is for what consequences occur when we summon our Tulpa?

In the case of Olivia Mabel, a few things stand out. One is the silent calls that led police to her doorstep on Feb. 27, 1994. The other is a note left, supposedly in Olivia’s handwriting, apologizing to Aiden – dated Feb. 27, 1994. The problem is: Olivia Mabel was declared dead for some time, on the basis of her decomposition when found.

The sceptic in myself would say that those who made the call left the note. They stumbled on the body in the rack shackle of a home, panicked and fled, but not before picking up the phone and dialling 911 several times.

But the problem here is that an investigation was conducted, and surely something so simple would have been quickly discovered.

And then there’s the note – in her handwriting and dated for the day she was discovered by police. The rumours didn’t take long to grow into legend, and for the various interpretations of what Tulpa really is, some believe an evil is at work.

“One of the oddest parts for me,” says Officer Santiago, one of the first officers on the scene in February, “is the date on the last letter we found. Dated the very day we kicked that swollen door down. The city concluded that she post-dated everything but I don’t believe she was alone in that house. And I don’t believe her spirit wasn’t still in the room with us that night. But then that makes me the crazy one, right?”

Paranormal experts were summoned to the property after her death, when the house simply wouldn’t sell on the market. In 2005, Drew Navarro, a paranormal expert assessed the house.

“I’m not even sure this was even ever on our physical plane. In the hundreds of locations, I’ve studied I’ve never felt such an imposing force. I couldn’t breathe, my heart was constantly racing. Its energy kept changing, but none of it felt inviting. Whatever is in there, it’s extremely possessive and behaves so erratically, like a jealous child throwing a tantrum. As far as I’m concerned, that house and that entire property should be avoided. It needs a serious intervention, because I’m not sure what we’re dealing with.”

Some believed that a living Tulpa – a “thought form” – was roaming the Footlights Ranch, summoned by Olivia in hopes of reuniting with her precious child through the creation of an entity; one not entirely planned for.

For whatever may be the cause of Olivia Mabel’s death, the legend will no doubt continue.