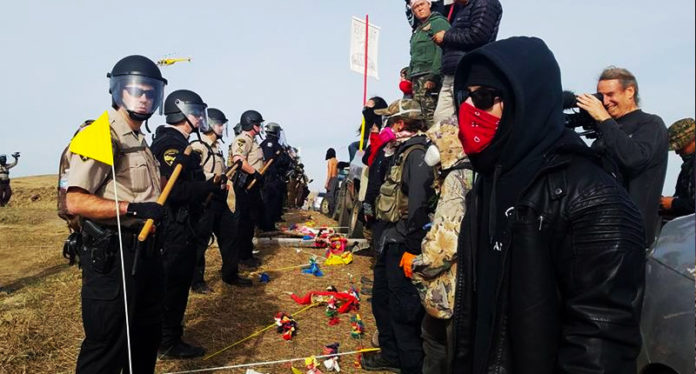 The 5th of December will see the closing of all lands north of the Cannonball River. The Army Corps of Engineers made the announcement, which will also include the closing of the Oceti Sakowin protest camp.

What the 5th will bring, only one can imagine, as there are further plans to swell the numbers of protestors on the 4th through to the 7th of December, as veterans by the hundreds plan to help defend the land, in what has been described as a “military [like] unit.”

The Go Fund Me page “Veterans for Standing Rock #NoDAPL” released this statement:

“We are veterans of the United States Armed Forces, including the U.S. Army, United States Marine Corps, U.S. Navy, U.S. Air Force and U.S. Coast Guard and we are calling for our fellow veterans to assemble as a peaceful, unarmed militia at the Standing Rock Indian Reservation on Dec 4-7 and defend the water protectors from assault and intimidation at the hands of the militarized police force and DAPL security.”

The roster of veterans is said to stand at over 2,100 members who plan on coordinating a shift roster.

“It’s time to display that honor, courage, and commitment we claim to represent. It’s time for real Patriots. Now more than ever, it’s time for anyone and everyone to lead.”

Recently, in light of the planned crackdown to officially block access to the land, and thus, halt the protests, it’s reasonable to expect that those already assisting with and acting as protection for Energy Transfer Partners (ETP) – the company behind the DAPL project – that the protestors will be forcibly cleared out, most likely by the National Guard and “militarized police forces,” The Free Thought Project predicts.

And it’s not an unwarranted prediction.

What one must question is the funding of the militarized police, so far. Riot gear, back to back shifts, armoured vehicles and so forth, have been deployed now for months against the peaceful protestors.  Unicorn Riot has questioned this, and has obtained emails through a public records request, revealing “time sheets” paperwork to be filled out by “law enforcement logging overtime hours after working #NoDAPL protests.”

“I’ll ultimately be paid by the oil people dealing with the protests. I’m guessing when all of that is finally over and the dust settles, the oil company is going to want all the paperwork for reimbursement. I figured I should have some formal form instead of writing hours on a napkin (smiley face). Thanks.” A man named Tyler Falk responds to the Stutsman County Sheriff Department’s April Anderson.

As Unicorn Riot points out, the “oil company” is the ETP. It is also important to point out, as Unicorn Riot suggests, that there is no direct evidence of ETP paying the police, however, the email does suggest otherwise.

ETP’s CEO Kelsy Warren told CBS earlier that the company was willing and offering to pay for the costs incurred by the protests. According to CBS reporter Mark Alpert, the authorities have yet to accept the offer.

If the police are to be paid by the ETP, the ballgame, legally, has changed. The police then become nothing short of mercenaries – private guns for hire.


This article (Emails Obtained Suggest Police on DAPL Oil Company’s Payroll) is a free and open source. You have permission to republish this article under a Creative Commons license with attribution to the author AnonWatcher and AnonHQ.com.